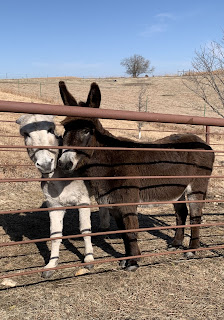 Like an exile without a country, ProfessorRoush this week was a gardener without much of a garden.  Cold brisk weather and a little snow combined to drive me to indoor gardening, the latter a topic for the future, but I wandered outside a little here and there just to assess the premises.

And to feed the donkey's!  Several weeks ago, I occasionally began supplementing Ding and Dong's forage of the remaining stubby prairie with a little store-bought grass hay and they've quickly become accustomed to these little treats, hanging out on the weekends where I'll see them if I come out.  They've also come to expect apples during these visits, and yesterday seemed quite disappointed when I only showed up with hay, sending me a disdaining donkey look as only these apple-starved pair of prima donnas could.

In a traipse around the back yard, I also came upon a new prairie citizen, at least new to me.  I think this frozen creature is not a snake, but a Western Slender Glass Lizard (Ophisaurus attenuatus) missing the end of his tail as they often do.  They are named because their tail breaks off easily to aid in escape from predators, but I'm going to have to concentrate to make sure I don't remember this as a "grass" lizard rather than "glass" lizard, being a prairie creature and all.  In coloration and skin pattern, he resembles the skinks of this area, but this guy was about 2 feet long and didn't have legs.  I don't know what he was doing out of his burrow laying upon a layer of snow, but I'll bet he regretted that decision.  In fact, I wasn't sure if he was alive or dead, but I was not about to bring him inside and warm him up to find out, possibly subjecting both the unaware innocent lizard and myself to the wrath of Mrs. ProfessorRoush.  I lifted him carefully with a snow shovel, carried him over to a straw-mulched bed, and placed him beneath a 6 inch layer of straw on the unfrozen ground.  There, he'll either be safe from hawks and other predators and thaw and survive, or he'll join the straw as eventual compost. 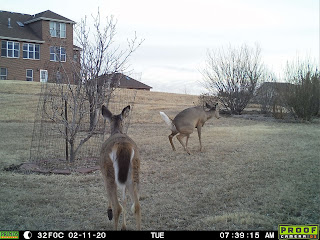 The only moving creatures in the garden beside the donkeys, Bella, and myself seem to be the ever-present deer.  I checked one of my new trail cameras yesterday and I'm quite happy with the results.  The pictures are much better quality than my previous camera, the shutter speed is faster and catches more animals, and the deer don't seem to notice the new camera around, or at least they aren't coming up to be nosy about the red light coming from it.  I expect a lot of more "candid" shots over the next few months, although many will not be perhaps as risque as the deer in the background which is depositing some fertilizer near my 'Yellow Bird' magnolia while in the view of another white-tailed voyeur.  I've even already captured a snap of a coyly cantoring coyote (below), the first that I believe I've gotten with a trail camera.   My garden seems to have a better night life than it's gardener! 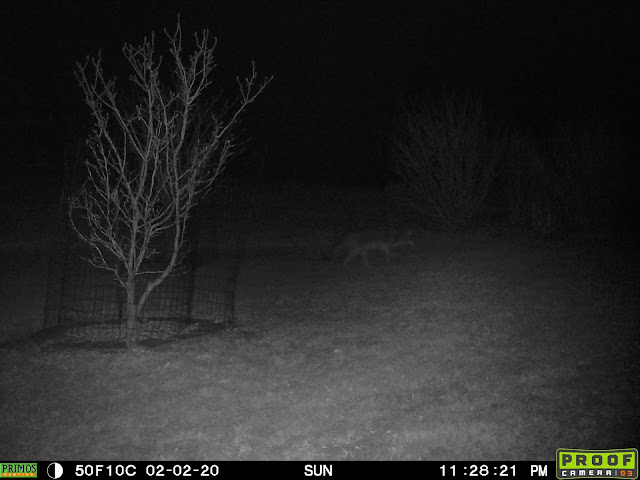 Posted by ProfessorRoush at 2:07 PM