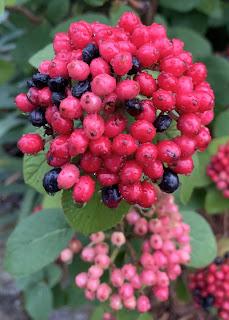 When one gardens long enough, and within a large enough garden, mislabeled plants and unexpected seedlings and woebegone cultivars will eventually apparate at will and often in surprising numbers and places.  And I'm not referring to the occasional 'Doctor Huey' rootstock that takes the place of your favorite rose after a long cold winter, nor to the frequent peony seedlings that I encounter in the garden and have spoken of before.  I'm talking specifically about those Flying Dutchman- and Mary Celeste-type mysteries that befuddle the mind and are spoken of later in soft-whispered legends after nightfall. 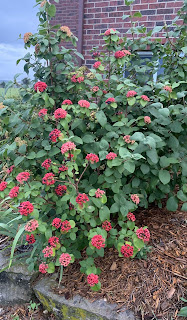 This Viburnum lantana pictured here and, at fruit, above, was once a green and gold-leafed variegated form that pleased me so much for a few years and has now been replaced by this more bland-leafed but still beautiful shrub.   The original plant just seemed to wither and die two years ago as this changeling sprung up a couple of feet closer to the edge of the bed.  I don't know if this imposter is a seedling or some rootstock from the plant I purchased, but the taller it grew, the more the original plant faded.

I'm never surprised when a variegated plant gets overwhelmed by a reversion to a fully-chlorophyll-ed mutation, having seen it in sedums and euonymus, and lots of other perennials, but I was initially disappointed at the loss of the variegation in the V. lantana.  Now, however, I'm reconsidering that disappointment while the contrast of foliage and bright red fruit is providing a fine ornament to the garden, whether the weather is wet and cloudy, as above, or bright and sunny, as it was this morning.  A gardener should never look a gift wayfaring shrub in the seed head, to mangle a phrase. 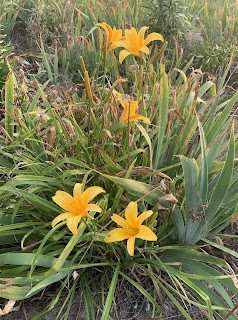 And then there are the surprise volunteer seedlings of other plants than peonies in the garden.   I recently noticed that this brassy yellow daylily has sprung up in a bed composed entirely of irises (with only a few Asian lily bulbs scattered among them), and I have no idea how it got there.   Now, granted, some of these iris were moved from a bed that contained both daylilies and irises, but there are several reasons I don't think it was accidentally just transplanted.

First, this volunteer seems to be growing in the middle of the 5 or 6 year old iris clump and it was never there before.  Second, there are no other yellow-ish daylilies in my garden, anywhere, that are identical enough to be the parent clump.   The most similar daylily I have at present is 'Hesperus', the 1950 Sprout Medal winner, but the latter has wider petals, is a little less brassy, and is more fragrant than my garden-crashing volunteer.  No, I think this is a new daylily, a random seed scattered by a bird or rodent that happened to like the soil here.

So, feel free to compare and contrast, 'Hesperus' above at right and the brassy interloper here at left, but I'm certainly not going to complain at a free daylily.  I'll move it, this fall, to a place on its own, perhaps into a new bed with other volunteer seedlings of my garden.   I consider it, as I stated before, an afterlife effort to drive the next owner crazy as they try to identify the plant or its provenance from my messy garden notes, a vain attempt to continue to influence the garden from places beyond.  If gardeners can't find satisfaction in this life, it's one way to have a good laugh in the next.
Posted by ProfessorRoush at 11:32 AM