Standing out, even from a distance, from the daylily yellow and oranges, from the hydrangea whites and green ornamental grasses, are a few eye-catching, awe-inspiring plants that are cheerfully dragging ProfessorRoush with them through the hot weather of late June.  Some might call them pink, some might call them "hot pink," but they are the definition, the epitome of fuchsia.   Fuchsia color without fuchsia genetics, you might say. 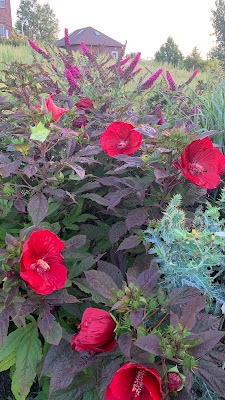 The most vivid, screaming at me from far away in the garden as I peer out my window each morning, is Buddleia 'Buzz™ Velvet', a  2014 planting in my garden introduced to commerce by the venerable British firm, Thompson and Morgan.  I've grown a number of Buddleia cultivars over the years, but this one and 'White Profusion' are the only ones that have stood the test of time and Kansas weather.  The latter may survive only because it's southern exposure and protection from north winds from the house behind it, but 'Buzz™ Velvet' is exposed out in the middle of the garden, protected only by some dead ornamental grass in the winter.

Buzz, if I can use that shortened moniker, stands about 5 foot tall and is blooming its head off at the moment.   A dazzling vision from the house, I'm showing you the opposite viewpoint here, because looking from the deeper garden towards the house and barn, it is the backdrop to Hibicus 'Midnight Marvel' and the blue-foliaged seed-pod-ed remains of Argemone polyanthemos, the white prickly poppy that I allow to grow there.  Yes, I like Buzz™ Velvet, as do the butterflies who are all over it, all the time.

Marking the corner of a nearby rose bed, fuchsia-pink 'Moje Hammarberg' is also a bright bloomer, although a more diminutive one.   I've written of 'Moje Hammarberg' before, and I still have high hopes for this rose as a survivor in my garden.  He's still short, 2.5 feet tall at 3 years old, and he's a little wider at 3 feet around, but those loose fuchsia blooms are plentiful and were moderately untouched by the Japanese beetle invasion this year. 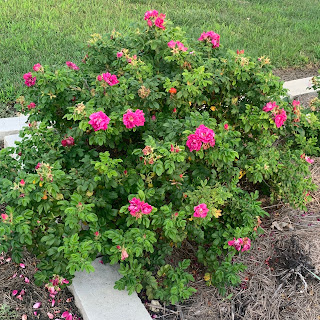 'Moje Hammarberg's lack of attractiveness to beetles is most interesting to me right now, almost as interesting as its fuchsia coloring.  He stands only six feet away, directly across from and mirrowing 'Hanza'.   'Hanza', has nearly the same color, the same rugosa foliage, a little larger bush, and the same loose bloom form, but it is a beetle magnet  In fact it is host for the massive orgy of beetles at the top of another recent blog entry.  The primary difference I can see between the bushes is not one of appearance, but of fragrance;  'Moje Hammarberg' has a little fragrance, while 'Hanza' is loaded with a spicy aroma.  Is that the attraction?   Are Japanese Beetles more apt to attack fragrant roses?   Or is the whole thing just one big fuchsia-tinted coincidence this year?   Inquiring gardeners want to know.
Posted by ProfessorRoush at 4:24 PM