The garden greets me from a shroud of mist on this quiet Christmas morning and I couldn't ask for more from the world.  Delicately diffused light covers the garden in a blanket of down, softening the harsh lines of winter, cloaking the blemishes of age.  There is stillness in the garden, mist muting the sounds of highway and neighbors, an oasis of rest and silence.  This blessed morn has given me a gift; a gift of oneness and peace with my garden and the world. 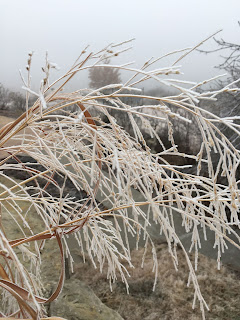 Outside, the cold ground meets the mist and coats the earth and plants with frost.  Grass flowers present as delicate sculptures and sparkle with mirth, turning slowly to and fro in the scant wind.  A frozen lilac hides its promise from the wiles of winter, protected within a damp icy blanket and staid among its fellows.

Today's gift of Christmas is the very definition of "hoarfrost," a maladroit moniker for the beauty it reveals.  Hoarfrost has its origins in Middle English and Old Norse from "hoary," something gray or white with age.  Uttering the name, one hears the low ancient mutters behind the name; old, decrepit, tatty, cold.  The synonym "rime" is no improvement, too near its rhymes of grime and crime to suggest any positive enhancement of the dreary winter world. 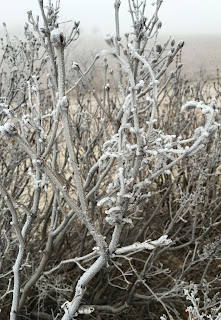 For future use, I'm going to suggest the word "mistglove" as an improved name for this natural phenomenon.  As I carry no ancient memories of predatory cave bears or saber-toothed tigers, the term "mist" holds only peaceful and comforting connotations, and "glove" amplifies that warm and protective image, making me just a calm and comforted ProfessorRoush on this Christmas morning.  Yes, "mistglove" it shall be.

And a very Merry Christmas to all, mistgloved or not wherever you may be!
Posted by ProfessorRoush at 9:58 AM 1 comment:

My Garden's Got Game 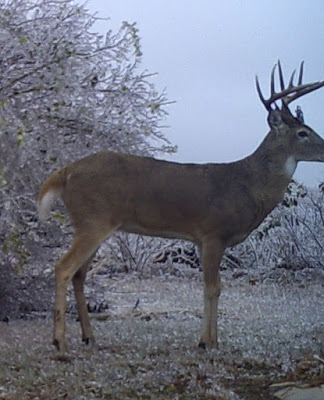 Until today, the sometimes dense ProfessorRoush has been under the impression that his garden has gone into hibernation for the cold days ahead.  Because of my "in-while-its-dark," then "home-while-its-dark" work schedule, my garden wanderings have become limited to weekend treks during the few hours of sunshine and tolerable temperatures.  Primarily, I get out into the garden for a few lovely minutes to exercise the portly Bella and make sure the trailer hasn't been stolen.

I was far wrong, however, about my garden being in hibernation.  While the plants may be biding their energy, a check of my game camera shows that there is plenty of game visiting my garden.   At least I can say "my garden's got game" with a straight face now.  In fact, I just realized that the number of larger mammalian bodies moving through the garden is greater now than at any other time of year, even without any attention from humankind. 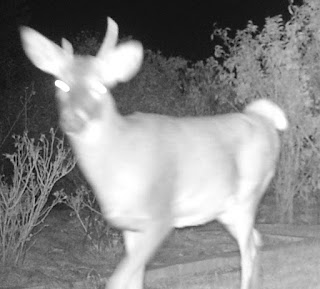 From October 31st through December 3rd, my game camera has recorded 19 separate periods of invasion by large-furry tailed rats, some occurring over several hours time, with no discernible pattern as to time of the raids.  Early morning, late evening, middle of the night, all random.  On the camera, as shown in some of the photos here, I can distinguish at least 7 individuals, ranging from the beautiful and proud 10-point buck in the first photo, an 8-point buck, a buck with two broken stubs for antlers (left), an unknown number of does numbering at least two (several pictures have pairs), and at least two different fawns. 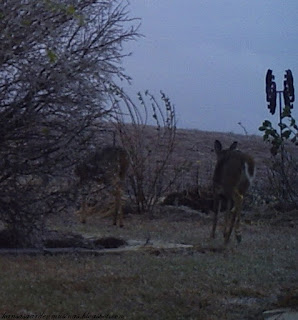 Interestingly, the ice storm seems to have affected their daily pattern as much as mine.  The only daylight photos of deer that I captured were taken in the days while ice was on the ground.  Perhaps they were desperate for food that wasn't ice-covered, or perhaps they feel safer moving loudly in the daytime than when they are alerting night predators with each ice-cracking step. 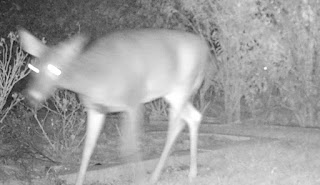 My garden's game is even playing games in the darkness.  The photographic evidence suggests that Follow The Leader is pretty popular, and Hide And Seek pick-up games are everywhere.  Look at the photo to the left;  Can you see the fawn standing in the bushes just behind the legs of the doe pictured here?  I'll give you a hint; locate the light-reflecting eye in the bush and then look for the hind legs to the left of it. 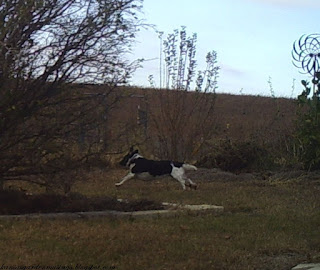 The only damage that has occurred to my garden seems to be part of a Purple Smoke Tree toppled by the ice, so I guess I won't get my dander up about damage that I can't find.  The deer can just have what rose rosette disease hasn't already taken and I'll pick up the pieces next spring.  Bella and I can still enjoy the garden, romping around in the sunshine as we did today.  I'll say one thing for sure; for a mildly obese dog, that Beagle-Border Collie mutt can run like a deer!

Posted by ProfessorRoush at 12:45 PM No comments: