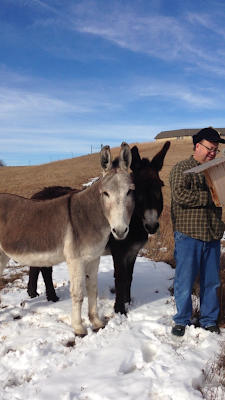 With the return of several days of above-freezing temperatures here, the Flint Hills have at least temporarily morphed from deep snow back to brown grass, and I was enticed outside yesterday afternoon by Mrs. ProfessorRoush to participate in what she envisioned as a nice brisk walk in the sunshine.

Unfortunately, Mrs. ProfessorRoush underestimated my determination to avoid useless cardiovascular exercise and she found herself accompanying me on a few brief gardening chores on the thin-muck-on-frozen-ground that currently serves as the prairie surface.  I pulled the Christmas tree down onto the burn pile, changed the memory card in my garden camera, and dragged Mrs. ProfessorRoush to the pond, where we proceeded to relocate a few bluebird boxes to locations that I hope will entice bluebirds more than the wrens that occupied them last year.  Mrs. ProfessorRoush was a great companion, providing a running commentary of the beauty of the frozen pond while picking her way gingerly through the slop, and thus preventing me from feeling any sense of loneliness in the quiet and peaceful surroundings.

As is often the case when a puttering gardener is trying to take advantage of a warm day, there were numerous other interlopers besides the lovely Mrs. ProfessorRoush who demanded my time and attention.  Near the pond, we found ourselves being chased down by the donkeys, Ding and Dong, who both seemed intensely interested in the bluebird boxes and who provided close supervision of the move and their advice and final approval of the new locations.  Once or twice, they even had to be swatted away from breathing down the back of my neck while I tightened the screws holding the boxes to the fence posts.  Warm, moist, donkey breath around my ears makes me a little nervous, especially since Ding likes to bite the fingers that give him treats.  I didn't need any Mike Tyson-style ear-mangling events to provide stain the remaining snow.

Soon, I'm sure, Spring will arrive, providing succulent grass to occupy the donkeys and a lack of novelty to outside excursions, and I'll be forced back into solitary gardening, puttering alone with my hands in the dirt. It's a dirty, lonely chore, but one that I'll be happy to tackle once again. 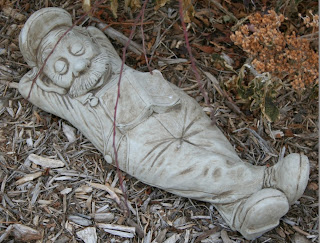 This dawn beckons, the first morning of a new year, and yet I find myself reluctant to bid goodbye to the old.  The Year 2013 Of Our Lord was a good year on the Kansas prairie, filled with change and happy moments.  It spanned the building of a barn and the quickening of that simple enclosure's spirit by the addition of  warm-blooded inhabitants to the environs.  It embraced an active and expanding garden, with roses and grasses and shrubs and perennials to satisfy any man and swoon many a maiden.  It connected aging man to growing opportunities, moved impatient gardener closer to Nirvana, and forced change where change needed made.  Experience has added yet another year to this gardener's repertoire, a hedge against the improper choices of youth and recklessness.

On the other face, 2013 brought Japanese Beetles to my garden, and revealed evidence of the existence of  a still unknown creature who likes to root through the soil in search of grubs, destroying iris and daffodil alike.  It brought coyotes, a multitude of white-tailed and quite hungry deer, furry rabbits and long sinuous silent snakes. It oversaw the return of my weed nemesis, the Common Dayflower, to my landscaping, and the rapid advance of a prize blackberry into an impenetrable and unproductive thicket.  It disappointed me with a lack of fruit in the orchard and the disappearance of grapes from the vine.  Snow fell in very late April and Spring was late.  Winter came early in October and deepened in December, shortening the golden period of the garden.

Perhaps this new year, 2014, is good riddance to the old, best welcomed in its arrival rather than lamented as change.  Today, like the concrete gnome that lays at the foot of my sidewalk, this gardener and his garden rests.  Like the gnome, the garden is cold and dead, brittle and brown from the view of the outside world, inert and languid.  Like the gnome, the aging gardener will also nap today, but indoors, his new resolution to spend at least part of every seventh day this year imitating the gnome, an unread book on his stomach and smiling from a pleasant dream.  With the New Year, and the growing length of each new day, hope and happiness begin again.
Posted by ProfessorRoush at 10:03 AM 5 comments: