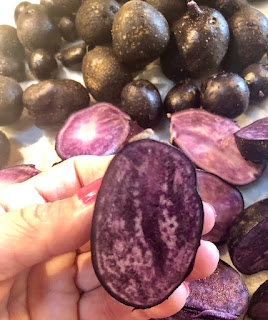 Fourth of July found ProfessorRoush out digging up some early potatoes.  I only planted 10 potato halves this year, to provide just a hill or two of taste at a time, and Mrs. ProfessorRoush wanted fresh sweet corn and new potatoes for a 4th of July dinner.  I could provide the potatoes, but since I had planned a corn-less garden year, the nearby market had to provide the corn.  Anyway, two plants worth of potatoes later, we had a nice  mess of fresh potatoes to eat. 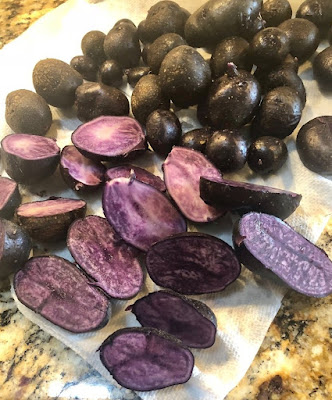 Yes, I planted only blue potatoes this year.  I'm tired of 'Red Norland' and 'Yukon Gold' around here.  Blue potatoes are supposed to be "healthier" if you listen to all the hype,  but I suspect they're just another potato, a little more starchy and gimmicky than most.  I didn't know until recently that there were different varieties of blue potatoes, from heirlooms to 'Royal Blue' to 'Adirondack Blue', the latter bred and released by a trio of provessors from Cornell University in 2003.  The things you learn while blogging; because it retains color when cooked, the 'Adirondack Blue' variety is used by the Penn State Alumni to sell potato chips in the Penn State colors.   You would think that Cornell wouldn't allow that, Ivy League rivalries being what they are.  Maybe the 'Adirondack Blue' variety is secretly bred to decrease the testosterone of rival football players.  Never put anything past a University professor. 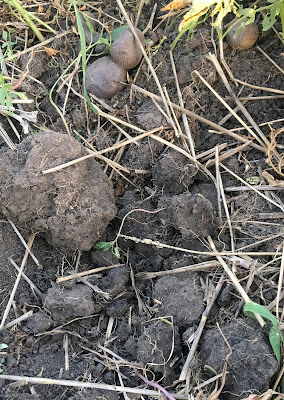 ProfessorRoush knew that it was dry around here, since every lawn-mowing this summer  is essentially a dust storm where I come back in looking, as my daughter said, like I "work in a coal mine."  The lack of serious rain since last Fall has been obvious in the sparse bloom and winter-kill of many plants this spring and summer.  But the garden soil, when I planted this spring, had been moist and workable enough and I had watered these potatoes regularly when they were young.  Digging them out now, however presented me with a different story.  The ground is rock hard, essentially concrete sans gravel.  On the right is one of the holes I dug, complete with a few potatoes that I haven't yet picked up at the top of the photo.  There are monstrous solid dry clods that the fork can't pry loose without extra effort.  Thankfully, I've got soaker hoses running to the tomatoes and melons, but this dirt caused me to give all the shrubs and roses a good deep soaking this Sunday morning.  Three and a half hours later, I think it will all might just survive another week.  A week that is forecast in the high 90ºF's and 100ºF's with no rain in the next 10 days.  We probably won't see rain again until September, so this morning's hand-watering will be likely repeated weekly for awhile.  So much for weekend rest.
Posted by ProfessorRoush at 12:49 PM 1 comment: 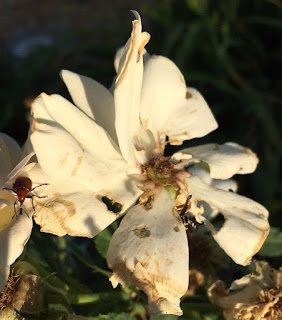 ProfessorRoush is NOT, of course, referring to a mythical reunion of Paul, Ringo, George, and any ex-band members who may exist, because if I was, I would have spelled the noun of the title as "Beatles."  Instead, I'm obviously referring to to the barely-visible rear end of the demonic chitinous lout on the lower right side of the white flower here (and not the other long-snouted insect to the left).  Do you see the hiney of the Japanese Beetle in the lower left of the flower?  Look closer.  Click on it to blow up the photo if you need to.  See the bristling patches of white hair along the edges of its abdomen? 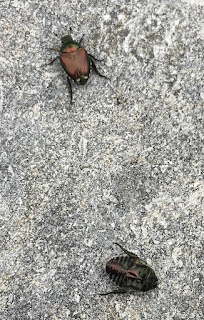 I was simultaneously amused and alarmed eight days ago, when, as I visited a local commercial horticultural facility, I overheard a gardening couple asking a store clerk what they could buy to kill Japanese Beetles.  Thus alerted that the blankety-blank beetle season was upon us, I vowed to be ever-diligent over the next few days, and, sure enough, on July 1st I found the first Japanese Beetles of 2018 on 'Snow Pavement', 'Fru Dagmar Hastrup', 'Polareis', and, of course, 'Blanc Double de Coubert'.  The first two victims can be seen at the left, taken moments before I squished them into beetle pulp.  In fact, I found and squished eight beetles on that first evening.  The Ex-Beetles of my garden. 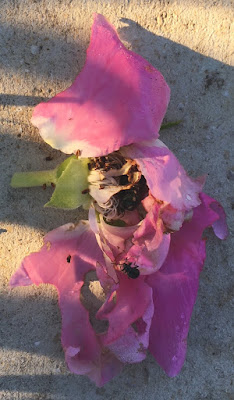 In another more typical picture of the damage that Japanese Beetles can cause to a beautiful bloom, I give you the traumatized bloom of 'Earth Song' that I discovered this morning, seen in the photo at right complete with the Japanese Beetle hiding in the center of the flower (please ignore the Melyrid at the bottom.  I see the latter insects all the time and they don't hurt the flowers).  By the morning of the second day of the 2018 invasion, my total kill is now 14 squished beetles.  Unfortunately, it should have been 15 squished beetles (one male escaped this morning by leaping off the edging brick before I could lower my foot in his direction).

With a little research however, I just tonight discovered that, despite my vaunted prowess as a Japanese Beetle Terminator (Hasta la vista, beetles!), I'm winning a small tactical skirmish, but losing the strategic war.  As if Rose Rosette Disease and Japanese Beetles don't cause enough damage in my garden, the long-nosed brown insect to the left in the first picture above is NOT a harmless flower beetle.  The Internet informs me that it is a Rose Curculio Weevil (Merhynchites bicolor), another flower-eater and civilization destroyer sent to my garden by the demons of hell.  I should be just as diligent handpicking these little snouted monsters as I am the Japanese Beetles, and yet I knew not of their existence prior to this.  It seems to not be enough that I have one beetle enemy, the crunchy critters  have now enlisted allies.  Saints preserve my roses!
Posted by ProfessorRoush at 9:29 PM 4 comments: