That's It, Nothing Else 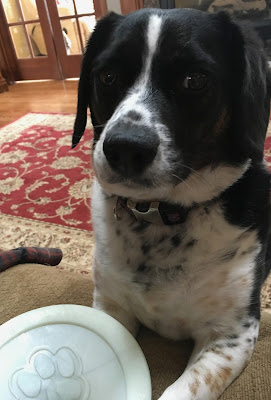 I'm afraid that this is all I've got to show for a weekend in the garden.  These two simple photos represent my dual accomplishments for two days, a weekend of miserable weather and attention to a single-minded dog.  In fact, as far as how my garden goes, these are my accomplishments for the whole week, since I worked during each day and I was too ill during most of the week to want to go into the garden in the evening.

The first photo is how I woke up from a nap this afternoon, to a closeup view of my constant pestering pooch, the lovable Bella, at my side, wondering if I'm ever going to rip the Frisbee out of her paws and throw it over the balcony again.  I don't know how long she had stood like this, patiently waiting for me to open my eyes and play.  But, for the four-hundredth time this weekend, I indulged her canine compulsive disorder and tried to muster enthusiasm from lethargy. 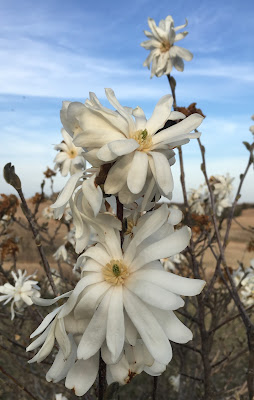 The second picture is my Star Magnolia on Saturday morning, shivering in the early morning 40ºF temperatures as they prepared to plunge to the 30's by afternoon and an overnight low of 26ºF.  When I looked at it later, I was surprised at how the marvelous light softened these blooms even in a simple iPhone camera.  I would show you a third photo of how these beautiful blooms looked this morning, but I can't because I wasn't willing to venture into the 40 mph wind gusts to get it.  Truthfully, I don't also don't want to chance anyone jumping off bridges at the desolation.  I'll just leave it by saying that the magnolia, appearing like a heavenly cloud yesterday from my dreary landscape, now appears to be a bare bush adorned with brown tissue paper. Used and disgusting tissue paper.  A few of these, and other magnolia blooms, brighten my kitchen today because I decided to save a few from the cold, knowing that the rest would perish.

My consolation prize is that I was able to write this blog while listening to a tribute on POP TV to Sir Elton John, his greatest hits sung by famous vocalist after vocalist while he is forced to sit in the audience.  I'm singing along to songs from my teens as poor Elton is held captive to his tribute, probably thinking about how the singers are mangling his songs.  I'm mangling them too, the lyrics written on my soul, memories springing forth along with each verse, lifting my spirits at the end of another lousy winter day in the midst of spring.

"And I guess that's why they call it the blues, time on my hands, should be time spent with you."
Posted by ProfessorRoush at 7:00 PM 3 comments: 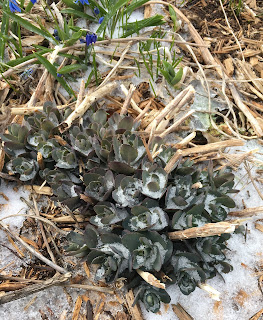 Gracious, ProfessorRoush is tired of winter.  All these poor plants, struggling towards spring, but fighting instead for just enough sun and warmth to stay alive.  Will they make it?  Can they make it to see June?  The real test may have been Friday night, April 6-7th, when we had record lows here.  Record lows for this date of 19ºF, to be exact.

The 'Matrona' sedum pictured above from the snow of April 1st is pretty tough, and I actually loved the foliage color against the twinkling snow.  I think the sedum was actually laughing at the icy hands of winter.  The Scilla siberica in the upper left of the picture was not quite as happy to be shivering outdoors, however.  Every time I look at this picture, I feel sorry for it. 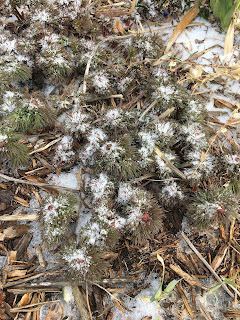 I suppose, as well, that the Paeonia tenuifolia here, delicate though it appears, will be able to withstand the brief cold spells.  Given that they are several weeks behind their normal appearance, however, I'm going to hazard a guess that they are global warming deniers.  They don't suffer from having political opinions interfere with their logic, they simply recognize that this spring is a quite a bit later than the last few.  And I'm sure they miss the company of the redbud trees and the forsythia, neither of which has bloomed here yet.  The lilacs, frozen in time, have had buds at the ends of those fleshy branches for weeks, yet they won't advance.  And the magnolias are half open, dark purple buds showing on "Ann", with no hope of showing us more yet.

And somewhere in the basement windows, are the four potted Rugosa roses that arrived from Heirloom Roses ready to plant on April 2nd.  With luck, they'll survive the dry house and decreased sunlight long enough for the weather to turn.  The same day they arrived, I also received three bare root roses from Edmund's.  Those poor stiff green souls are already in the garden, each planted, buried under a mound of soil, and then covered with a blanket of double burlap for insulation.  Another few days in the darkness, with the promise of temperatures in the 80's mid-week, and I'll begin to uncover them bit by bit.  Teens to 80's in one week is an unkind blow by any measure.