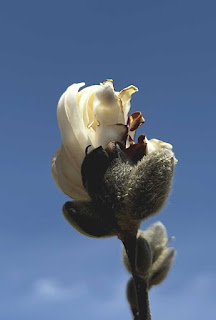 Two weeks later...and spring feels barely farther along that it was.   Oh, there are subtle signs; an early daffodil or two, lilac buds swelling green from their previous hard brown shell, a glimmer of action in the sprouting of daylilies.   But here we are March 27th, a week past the equinox, and the best that my Star Magnolia can conjure up is this single bud at the top of the bush, partially open and singed from the last frost.  That magnolia scent though, that sweet musky odor, was already present as long as I was willing to chance my nose into the bud.  And I was (willing).

Dressing later to go to a movie, I splashed on a little aftershave and later, smelling it on my hand, I realized for the first time that the Brut® that I've used all my life has a strong aromatic resemblance to magnolia musk.  Musky, earthy, heavy, the scent of magnolia reaches deep into my id and presumably that of others.  Not stupid those aromacologists, those noses that know the attraction of certain fragrances.  Males of my generation shy away from sweet flowery scents, but throw a little musky magnolia scent my way and they have a customer for life.  Well, that, and that's what my father always used.  Shades of Oedipus, is that heritage from a generation ago the reason for the long survival of that brand in a crowded market?  Is America and civilization-as-we've-known-it safe as long as Brut® sells well at Christmas? 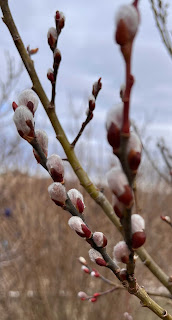 This French Pussy Willow 'Curly Locks' (Salix caprea) is also ready to open up and have its early way with the gardeners affections, but it, too, is late and slow to reach the climax of its bloom period.  As I search my records, there was only one year in the last 10 that Magnolia stellata first bloomed this late.  Most years, on March 26th it reaches peak bloom and it has bloomed as early as March 6th.  Similarly, in most years, forsythia is already blooming well and this year it shows no signs of breaking dormancy.  I wish I could tell you the normal initial bloom date of the Pussy Willow, but sadly, I've seldom noticed or written it down.  Please do as I say and not as I do and be consistent in the plants you keep notes on annually.   For me, the only consistency is the Scilla and the Star Magnolia, both because of their timing and their annual show. 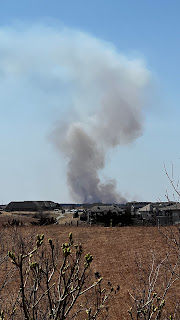 There are other signs of spring life on the prairie, however, and most notably the spring burns have started.  I took this picture yesterday as I arrived home from errands standing on the garage pad looking west.   Many times, I see these tall clouds of smoke billowing when I'm leaving work or on the east side of town and I'm calculating where these clouds lie in relation to my own house, praying that the neighbors haven't gotten out of hand.  This one, however is far away, on the hills to the southwest of town, near the airport, 4 or 5 miles away as a crow would fly.  Prairie fires always strike a little fear in my heart, but they provide comfort too, comfort that the world is normal and spring approaches once again. 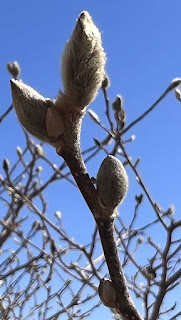 By "vainly searching", ProfessorRoush means that he is searching futilely, fruitlessly for spring, not that I'm boasting or conceited or vain about my search.  We had the largest snow of the year last week, on March 9th, 5 inches of snow that fell overnight and melted completely away under the 69ºF temperatures of today.  At least we received the moisture, badly needed moisture that will start the prairie grasses under the path to summer.  But most things are buttoned up tight, the lilacs showing no hint of green under their hard buds, and even Magnolia stellata, pictured at the right, shows no signs of spring, the fragrant flowers still tightly cloistered within the hairy buds. 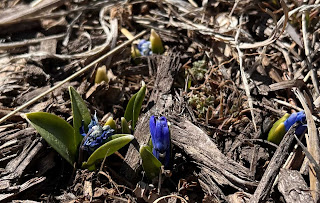 In the garden, I had to search a long time for any sign of spring at all.   Not even the snow crocus have yet made any appearance that I've detected.  I can only share these first sky-blue buds and yellow shoots of Scilla, just breaking the surface on the sunniest and warmest slope in my garden.  There are a few brave daffodil fronds pushing up here and there, but no peonies, no Dutch crocus, no Puschkinia.  Nothing but the squill to assure me that spring is coming or that the Earth has succesfully made it once again all the way around its star.
All of this is to say that I think spring will be late this year, or at least start up closer to average.   In 2012, I found the first Scilla blooming on March 7th.  In 2016 it was March 6th and the Star magnolia was blooming along with it on that date.  We are going to be later this year than earlier, compared to my notes of the past two decades on this spot of ground. 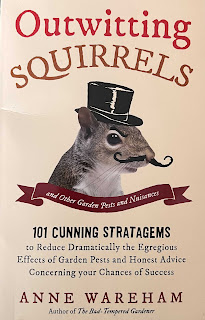 So, I have only the garden of my mind at present, and this week it was outwitting squirrels.   No, I don't mean I have a squirrel infestation here at the end of winter, I am referring to Anne Wareham's Outwitting Squirrels (and Other Garden Pests and Nuisances).   I learned of the book on Garden Rant, where it was noted that it's not available in the US at present.   But, Amazon, came through with a paperback copy for me last week and I've been learning about "Weeds You Don't Want", and ridding my garden of cats.   Anne, thank you for a delightful, humorous, and easy read, short quick chapters in an older text of yours (2015), but new to me.   It brought me one week closer to spring.

Posted by ProfessorRoush at 7:17 PM No comments: 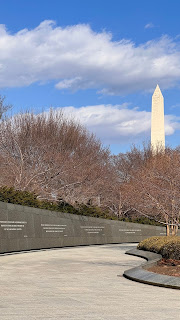 ProfessorRoush was in Washington DC this week, normally my favorite city to visit, particularly if I have time between conferences to hit the mall.   I've been there a number of times and have visited almost every monument and museum, some in the days before terrorism and nannyism ruined access to them.  I have walked the steps of the Washington Monument to the top and yet lived to tell the tale. 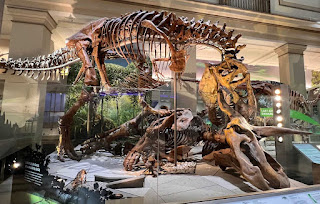 On the plus side, the weather was decent in the early part of the week and, as you can see from pictures, I did get an afternoon to wander about, visiting a number of my favorite monuments and the Museum of Natural History. 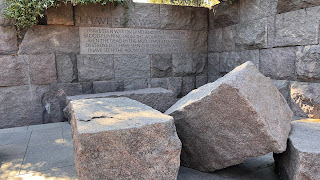 In fact, I ran flat into the FDR Memorial, not previously knowing it existed, and I was moderately impressed by the mountain of red granite moved for its creation into the former swamp of DC.   Certainly and appropriately the most ADA-accessible monument, I recommend walking through it, particularly spaced where it is on an almost direct line between the Lincoln and Jefferson memorials. 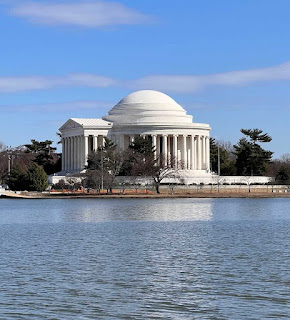 On the negative side, I was, as usual, too early for the cherry blossoms, seeing only a stray early bloomer or two in a protected depression near the Constitutional Gardens.  And it turned cold and windy during the latter part of the week, and I learned that the cold winds of Kansas have a rival in the winds coming off the Potomac on a cold day. 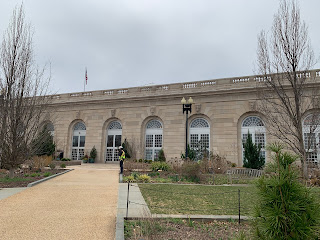 Most exasperating, however, was discovering that the United States Botanical Gardens conservatory has been closed to the public for over 2 years, at least according to its website.  The outside gardens are open, but not the USBG conservatory.  When I go to DC, I always check the schedule of lectures at the USBG, just in case I get lucky as I did when I once saw Roy Klehm lecture.  This time, however, the website has not been updated for quite some time and there is no mention of a reopening date.  It seems that the USBG is within the "U. S. Capitol campus" and the fools on Capitol Hill, elected and despotic, are deathly afraid that perhaps a massive revolutionary coup will be staged from within the Children's Garden or perhaps the Orchids Room. Good grief. 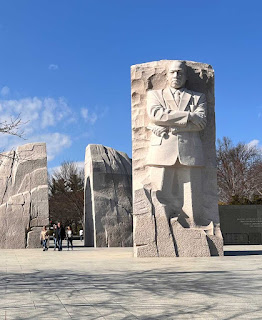 When in the course of gardening it becomes necessary for peoples with calloused hands and sunburned faces to dissolve the political idiot-cracy and allow visitors to the public gardens to which the Laws of Nature and of Nature's God entitles them, it is our right, nay our duty, to throw open the gates and allow the people inside.  Hortus Populus, Mors Tyrannis (Let the People garden, Death to Tyrants)!  You are right to fear the peasants who are most familiar with the proper use of pitchforks and shovels. Let Freedom Grow!

Posted by ProfessorRoush at 1:39 PM 4 comments: