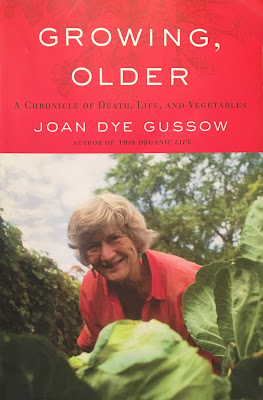 Just last Saturday, I walked into a Half-Price Books and walked out several minutes later and $70 poorer with two sacks of printed pleasure.  Thank God that the greater world has not realized the real value of the written word on paper and the vast majority of tomes have never yet reached the price of rubies and diamonds.

Foremost among the jacket blurbs that I thought would be intriguing was this book, Growing, Older, by Jane Dye Gussow.  I'm happy to report that its 200+ pages lasted only one plane trip, with only ten pages left over to finish after the last plane pulled up to the gate. The memoir, subtitled "A Chronicle of Death, Life, and Vegetables," is a series of thoughts and essays that begin with the story of the unexpected and rapid loss of Dr. Gussow's husband, Alan, to pancreatic cancer, which occurred in 1997.  Briefly glancing at the text in the bookstore, I was captured by her surprise to find that, after 40 years of marriage, she didn't really miss her husband, as she detailed her resultant guilt over moving on.  She found herself happily skipping down a street only a few weeks later and realized that while she would describe her long marriage as a good one, and would never have considered leaving it, she also recognized that an enormous amount of her energy and efforts went into the care of a socially awkward and dependent husband.

Those thoughts were the textual equivalent of "click-bait" to draw me into the book, but most of the memoirs are actually about gardening and living in the smaller space on the banks of the Hudson River, where she and Alan had downsized only a few years before his death.   Finally, here, I found a kindred soul with at least as many gardening trials and tribulations as I often whine about.  Dr. Gussow's garden floods several times a year and she is beset with muskrats, skunks, and other pests, all while she tries to raise the majority of her diet on the small plot of land.

I keep referring to her as Dr. Gussow because the now quite elderly lady is an accomplished professor of nutritional ecology, who still teaches an active university course every year while living what she teaches.  She was a pioneer in the local and regional food movement, perhaps THE pioneer as recognized by Michael Pollan and Barbara Kingsolver, and, throughout this book, she drops a multitude of facts about the real cost of food production into her conversations.  Well into her 80's, she still actively gardens, living mostly off her own produce, although what she terms "2-person and 3-person rocks" now require more help to move out of her garden than in previous years.

Dr. Gussow has another previous text, This Organic Life, that I've run across, but never read.  You can be sure that I'll be searching for it in the dusty bookstores of my life until I find a decent hardcopy to keep next to Growing, Older.

I had an inkling of spring.

In the garden today, while tearing down a bit of old fence, I had an inkling of spring, provided by my Magnolia stellata.  I had an inkling and I'm ashamed to say that my first thought, after having the inkling, was to wonder about the exact definition and origin of the word inkling.  You might think I should have been more concerned about the Magnolia, but such a straight-forward journey seldom occurs inside ProfessorRoush's attention-deficient mind.  It was inkling first, and then Magnolia.

According to the Merriam Webster Dictionary: inkling derives from the Middle English word yngkiling, meaning to "whisper or mention," and perhaps further from the verb inclen meaning "to hint at."   Okay, so now I know that even the linguists aren't sure of the origin of the word, but at least the definition is fairly straightforward, meaning "a slight indication or suggestion."  Okay, I got it, I had a hint of spring today.  If so, why didn't I just think "oh, there's a hint of spring?"  No, it couldn't be that simple, could it?  I had to make inkling my vocabulary word of the day.

Returning our attention to the Magnolia stellata, however, it is important to understand that my inkling derived from the fact that it has decided to begin peeling off its fuzzy winter coat quite prematurely, enticed by a few days of warm sunny weather.  Those delicate buds are exposed far too early, no proper garments under the coat, just lacy undergarments exposed before full consent is obtained.  I fear that the cold spell predicted later in the week will send a chill deep into this flower's innards, an ill wind blown up its skirt.

Likewise, I also noticed that the pussy willow (sorry the photo is blurry) on the other side of the garden is showing a little fuzz at the end of its prepubescent buds, an enticing bit of maturity destined only to fall victim to the icy reality of this cruel world.  Why, oh why does everything want to hurry along at a breakneck pace of living in the garden?   You want to shout at them, "Hush little darlings, go back to slumber, it's far to early to grow up and bloom."  But, nay, they heed not, speeding towards the inevitable damage of a reckless youth and headstrong nature.

Now I have an inkling of disaster.
Posted by ProfessorRoush at 9:41 PM 1 comment: 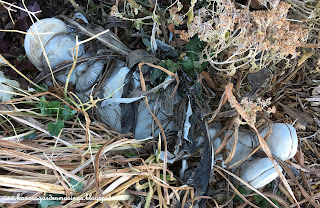 Two days of unseasonably warm weather last Sunday and Monday drove ProfessorRoush out of the house into the garden to begin what will assuredly be a solid spring of garden restoration, rejuvenation and redesign.  I roused this old sleeping garden gnome, covered as he was in the debris of daylilies and Echinops, from winter slumber, and put him to work alongside me puttering over and poking within the cold ground. 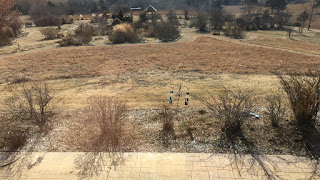 I began in the 55ºF heat wave of Sunday, sheltered from a brisk north wind on the sunny south side of the house, and I cleaned the bed bordering the patio free of dead iris and daylily leaves and the remnants of invasive annual grasses.  It was warm there, warm enough to shed the jacket and sweat a little while absorbing enough sun for Vitamin D synthesis and basking my reptilian brain in sunshine.  I always like to start garden cleanup here, so that the many crocuses and daffodils are not disturbed as they rise and will then flower freely and stand out in the neat clean bed.  The roses here will have to wait until closer to spring. 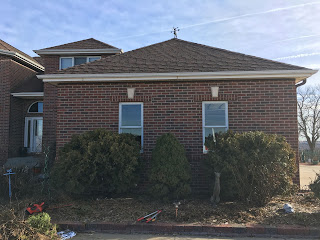 Then, on Monday, as the temperatures rose past 60ºF, I jumped ship at work and rushed home to start on the beds surrounding the front (north) side of the house.  The cleanup bug had bitten me deeply by now, and after collecting the remains of Orientpet lilies, daylilies and other perennials, I became convinced that my first major act of the summer had to be the destruction of the two overgrown Thuja orientalis 'Sunkist' that border the windows of the garage.  Fifteen years young, the original plant tag had listed their ultimate size as 2' X 2', but obviously, despite an annual haircut and a more drastic trimming once or twice through the years, these 6 foot giants had overstayed their welcome.  Off with their heads! 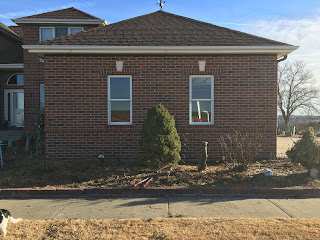 There, that's so much better, isn't it?  Now the Orientpet's won't have to lean away from the towering encroachment of the Thuja and the whole area looks brighter and more in ordnung to satisfy my Germanic soul.  I'm not sure what I'll plant in their place, probably another mislabeled 2' X 2' evergreen, but I feel I've made a good start on the garden year. 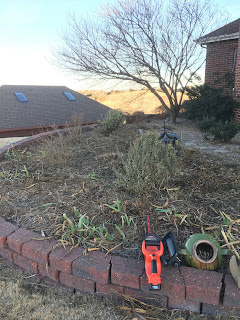 I didn't stop at the evergreens, however, and made a clean sweep over the entire front bed, removing peony and Knautia debris, trimming euonymus, and freeing the forsythia to shine alone.  The wind is a little more brisk across the front now, but my soul is lifted and refreshed.  That is, after all, the goal of our gardens, isn't it?