Ice, what change thou has wrought on the landscape of Eden!  A night of frozen tears, a dawn of day, and earth seems shackled in a skin of glass.  Breath of North, a frozen gale has bowed brave 'Hunter' down, closing pistil and stamen against the will of the bloom.  It's suitors absent, huddled in their hives, the red flower now becomes a jewel, a ruby amidst thorns.  This glowing center of winter's garden pleases under ice but will fade at the next kiss of a warm breeze.

The view from my southern back window is lightened this morning, the garden itself somehow cleaner and calmed.  In contrast, the front, north-facing windows are opaque with ice, mere light without form in their distance.  Under the weight of solid water, the Sawtooth Oak on the left sighs and spreads, hoping to ease the burden of load. 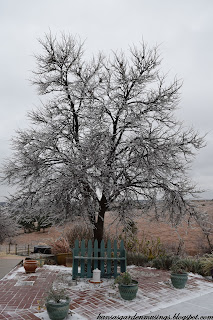 I worry for the trees, especially the proud but precarious Redbud to the west.  The favorite of Mrs. ProfessorRoush, a stiff wind could undo it in seconds, cracking it to kindling in a contest of will.  The existing gale already broke the resolve of the garden's photographer, sending him fleeing into the warmth of house, to the fire of hearth. 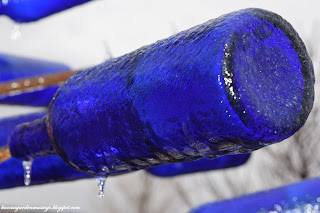 There will be no further sticky-fingered tree frogs on my bottle tree, blue cobalt turned death trap for amphibian skin.  Summer is long past, and I pray that whatever moist skinned creatures survived the droughts of August have long burrowed into shelter.

The orange hips of Carefree Beauty are preserved today, cased in glass, but will soon turn brown and shrivel.  So to, the relucent redder rugosa hip of 'Fru Dagmar Hastrup' will dim to dull.  Life in these hips has been stolen by the relentless ice, the seeds yet to spill upon the ground. 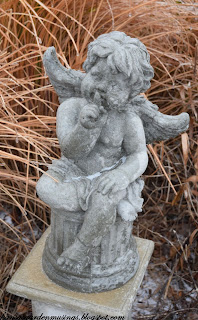 The cherub of the peony bed presides over all, calm and quiet, chaste and cool, reminding that this day was anticipated, nay expected, in the course of seasons.  The gardener heeds the stoic stone at last, slowing heartbeat, resting thoughts, reassured that the garden will survive again the orbit of years.
Posted by ProfessorRoush at 10:00 AM 1 comment: 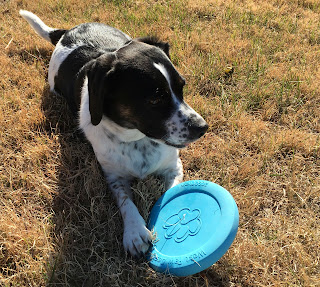 Thanksgiving, yes, and outside the wind is howling and the rain is coming down in sheets.  We had planned to visit my son in Colorado today, but a bad forecast and a winter storm watch convinced me that the return trip tomorrow might be a dangerous thing, and so, here we sit, Bella and I, staring out the window into the storm.  The photo to the right is from a happier moment, yesterday, when we took advantage of the last warm day to play in the sun.  Bella likes to hold the frisbee with her paws and doesn't give it up easily after she retrieves it.

Thankfully, my fall garden-related chores are essentially complete.  Hoses are drained and stored, peonies and irises and daylily beds hacked down, and the lawn mower oil has been changed, blades sharpened, and gas preservative run through.    Out the back window, the garden has entered dormancy and has turned to sienna, ocher, and umber, colors that are enhanced when the fall rains come to the prairie as you can see in the garden and distant hills below.   I wish I had not yet cut down the tall native prairie grasses in the foreground (see the bottom picture below), but in the midst of this dry fall I had given up on seeing any moisture and I wanted to stem the incursion of the field mice and rabbits this winter.  And "plant" the seeds of this year's penstemon.

Along with the fall chores of the cultured garden, one of my annual chores is to clean out the eighteen birdhouses that I've placed on the the periphery of the twenty acres I call home.  The trek up and down the property provided a perfect opportunity for me to photograph the house and gardens from the back hill, a clear Kansas sky presiding over the scenery on a gorgeous fall day early in November.  This is an overview that I don't think I've shown on this blog before.  The hill in the foreground falls away to a farm pond, hidden out of the bottom frame of the photo below, and then rises again to the house and barn.  The overall garden looks small from this vantage. 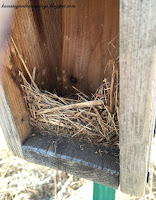 My "bluebird trail" and the Professor-Roush-customized bluebird houses were unusually successful this year, perhaps due to the extra moisture of this past spring.  Thirteen of 18 houses appeared to have fledged bluebirds, containing the thin grass nests characteristic of the species.  Four other houses, all near the woods and pond, contained the deep stick-formed nests of wrens, and one decrepit old commericial house contained only a dead wasp nest.  Thirteen bluebird nests is a PR for this little spot of land, a moment worthy of contemplation and celebration.

On the morning of the bluebird-house-cleaning, the back garden was just waking with the sun, long shadows aimed west, and somehow duller, and ready for winter.  Seen here, below, you can see the shoulder-tall height of the native bluestem that I have since mowed off.  I am always torn between leaving them unmown to capture the moisture of the winter snows and to witness the joyous rusty tones they exhibit when wet, but one of the reasons I cut them down is so that the seeds of the forbs among them drop closer, spread only by the whirring mower and hidden in the debris in hopes of increasing their density.  Spring penstemon and fall echinacea are always welcome and appreciated here in my prairie garden.   Now if only next spring would hurry up and come along.

Posted by ProfessorRoush at 1:34 PM 2 comments: 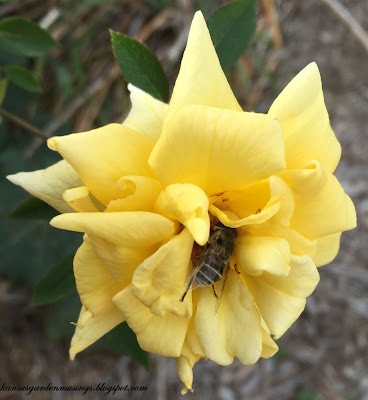 I woke this morning at 4:48 a.m. Standard Time, which was 5:48 a.m. just yesterday, the latter normal for me on my sleep/wake schedule.  I laid still for a few minutes, wondering at the time, but Bella came creeping up the bed to remind me that it was high time to get up and start the day.  Bella doesn't know that nameless bureaucrats have imposed an arbitrary time schedule change, decisions based on an America engaged in the Great War, the War to end all wars, about 6 or 7 wars ago or a hundred years back depending on how you want to count.  Bella doesn't care, it was simply time to get up and potty and eat and play.

The sun didn't know that it was back on standard time either.  The sky was already starting to lighten shortly after I woke, and it rose at 6:54 a.m, an hour earlier than it did yesterday.  The idiots we keep electing don't seem to have the same power over the sun that they do over my life.  Now I'm back to driving into the eastern sun during my morning work commute, endangering cars and walking students, blinded by the glare four times yearly instead of twice.

The bee, above, doesn't know that the time has changed.  It probably only knows that winter is nearby and it needs to grab whatever nectar and pollen it can, while it can, even this aging pollen from this blown blossom of a miniature rose that I know as "Little Yellow Beauty".  I can't find any official record of this rose, but that's how it's labeled in the K-State Rose Garden.  The g'vernment has forgotten to inform this bee and flower that the time changed.  The flower is probably thankful that it doesn't even appear on a government census.

As you know, I try to avoid politics on this blog like the onset of the plague, but, I'll state here and how that I pledge my vote for any candidate, even The Donald or Bernie Sanders, if they're the sole supporter of just staying on one time.  I'm a single issue voter on this one.  Daylight Savings Time would actually be my preference, but I really don't care, either Time is fine.  If, like me, you want this madness to stop, please visit and sign this petition to Congress, or this petition to the White House, or if you're like the rest of America, at least spend time "liking" this idea on Facebook.  Politicians, being the dolts what they are and an election in their future, they'll probably listen to Facebook better than anything else.  Grumbling over, soon back to your regularly scheduled program.
Posted by ProfessorRoush at 8:35 AM 1 comment: