Rats in the Berry Patch 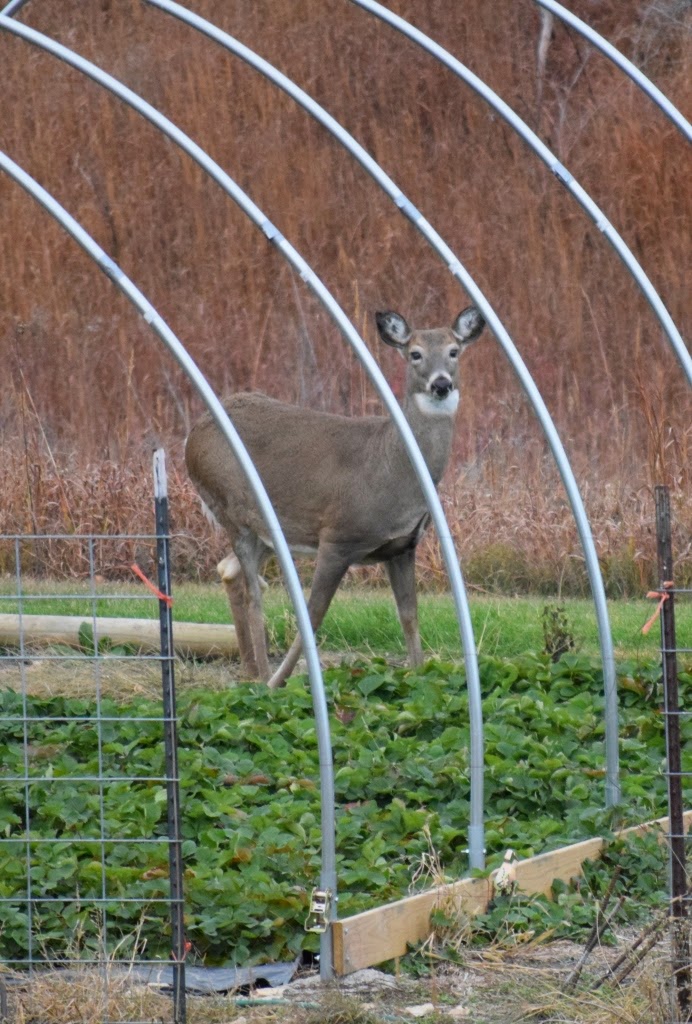 Yesterday morning as I was leaving for work, our new hyper-sensitive alarm system (Bella the half-Beagle), went into frantic alert mode.  Many times when that happens, I'm unable to determine the cause, but a quick glance down the line of her furry nose into the back yard directed me to the danger source.  The large furry rat pictured at the right was moving around my garden.

Mrs. ProfessorRoush directed me to run to get my camera to photograph the beautiful young maid, and so I did, only to return and find that the brazen hussy (I'm referring to the deer here, not Mrs. ProfessorRoush) was climbing through the currently unelectrified fence right before my camera lens (as seen at below left), and proceeding to sample my prized strawberry patch!   So much for deer jumping over fences and obstacles;  this doe was so well-fed and lazy that she thought she'd just push her way through. 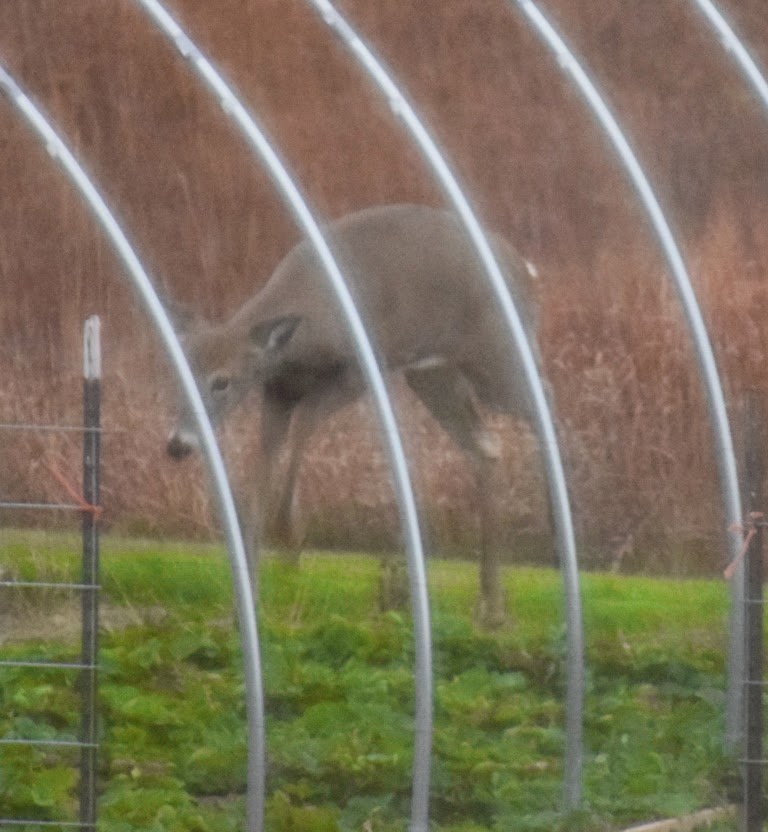 My flash was going off automatically in the dim morning light for the first few photos, and it attracted the doe's attention (as seen in the first photo above), but did not deter it.  Casting aside my awe and joy at this unexpected appearance of Nature in favor of the survival of my luscious strawberry future, I sprinted outside to shout and wave my arms at the invader. 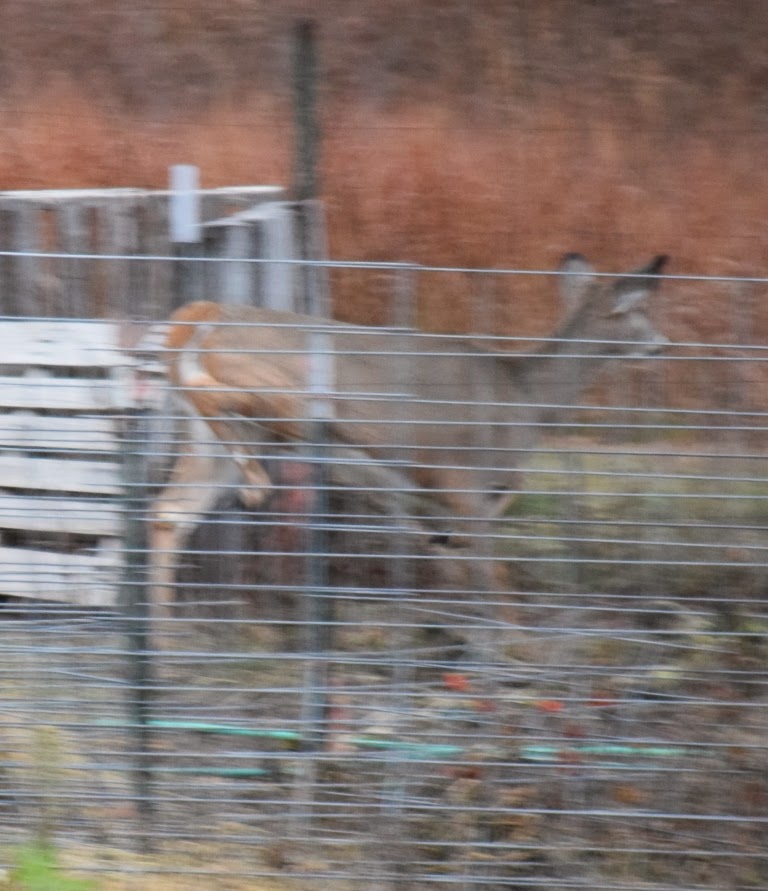 It was then I noticed that there were not one, but TWO does present, the second already in the middle of the vegetable garden, camouflaged against the grayed walls of my compost bins (as shown at the right).   With my luck, this one had already ate her fill of the strawberry plants.   Both deer initially stared at me with disdain, and then began to turn away when they finally realized that I wasn't going to shut up until they left.

Preferring the peace and quiet of the prairie to the loudly antic and frantic hominid, both deer slowly ambled towards the bottoms, taking their time and occasionally glancing back to see if I was gone and they could return to a quiet meal.   Shaking my fists and making "bang, bang" sounds didn't seem to hurry them up one bit, either. 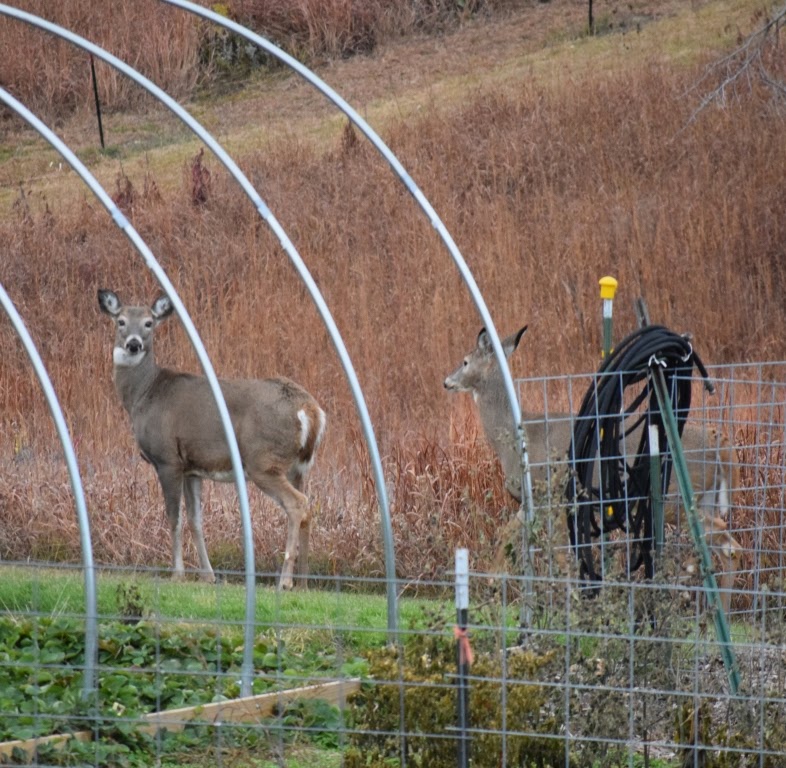 Now, since Daylight Saving Time is gone, I've got to run home at lunch soon so I can fix and turn on the electric fence and perhaps leave a few little peanut butter treats hanging from the electric wire.  It's simply too bad that it is illegal for a gardener to hook up the electric fence directly to the household current isn't it?  Maybe just this once, for the sake of the strawberries?


Posted by ProfessorRoush at 7:00 AM 4 comments: 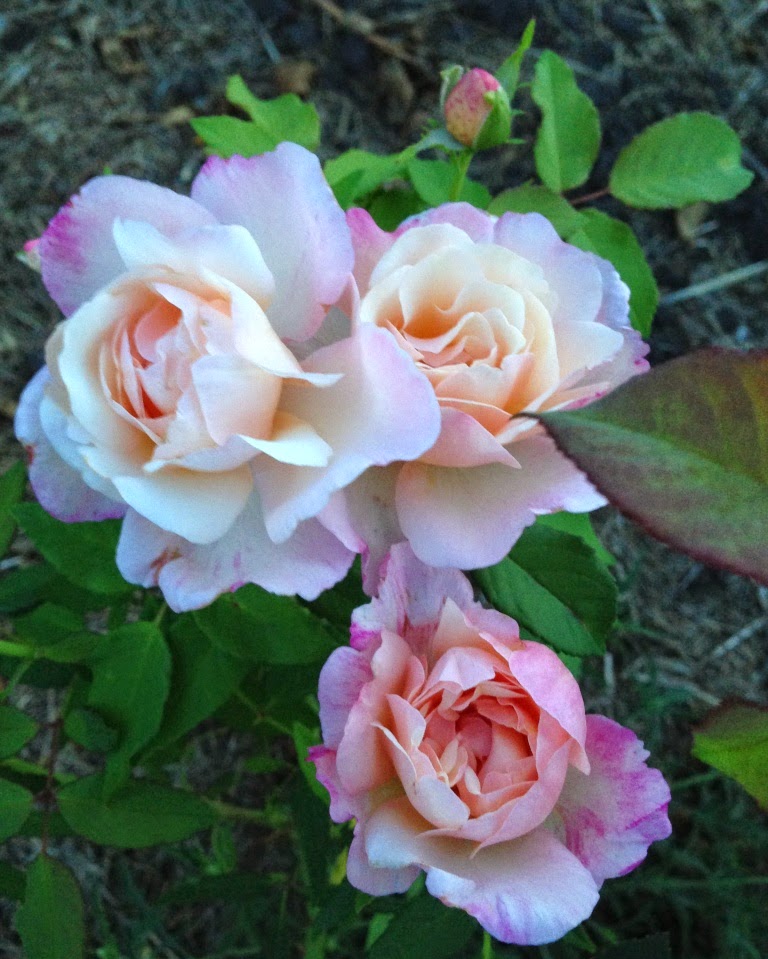 Jane at Hoe Hoe Grow, a blog from Lincolnshire UK, has noted recently that her roses need to be told that it is October there, not June.  In contrast, the roses here in Kansas are winding down and hardening off right on time.  As we have edged closer to the first hard freeze, I've kept snipping blooms and bringing them indoors so that they continue to brighten our late October mornings, but I also leave a number of flowers to form hips and thus indicate that it's time to stop their heroic efforts to procreate.  I guess when you're too "old" to attract the bees, you should trade the dance floor for the couch and comforter.

One of my brave roses facing the coming cold weather with grace is 'Gruss an Aachen'.  She has slowed her bloom rate, but she is still foolishly full of lacy beauty and holding up well against the night chills.  'Gruss an Aachen' , which translates as "greetings to Aachen" is a 1909 Floribunda hybridized by L. Wilhelm Hinner and  introduced by Philipp Geduldig.  She is often said, in fact, to have been the first Floribunda rose, the leader of a new race, and some would argue that all the Floribundas that have appeared in her wake are just poor imitations.  David Austin has tried to claim her as the prototype for his English roses, but I think her delicate nature just doesn't fit with many of his massive creations.

I don't have another rose in my garden with quite the the same subtle shadings of yellow, cream, white, and pink as 'Gruss an Aachen', and I treasure her beauty nearly every summer morning.  Some say that those fully double, large blooms  will bleach out a bit under sunshine, but the photograph here, taken on August 20th in the midst of a Kansas heat, is evidence to the contrary.  She is only mildly fragrant, and doesn't form hips for me (perhaps because of her rumored triploid nature).  I can see her parentage ('Frau Karl Druschki' X 'Franz Deegen') in the coloration, but I grow 'Frau Karl Druschki' and the latter is much taller and her blooms are composed of thicker petals.

Unfortunately, I never know if this lovely mistress will return each Spring in my garden.  She is not a vigorous rose (never more than 2 feet tall for me) and seems to be only marginally hardy here in my 6A or 5B climate (the latter depending on the winter).   This is the third clone of 'Gruss an Aachen' that I've tried, but I have hopes that this one will return since she is on her own feet (my previous girls were grafted) and has already survived a tough recent winter.  'Gruss an Aachen' does get some blackspot here, but other than thinning out her lower leaves, she seems to put up with a little fungus quite well.  Between the blackspot and the weak necks that keep her blooms shyly presented, she is not a garden show horse for me, but she regularly graces the kitchen table, and she will continue to have a place in my garden as long as a few of those blooms make it inside.

Posted by ProfessorRoush at 5:30 PM 2 comments: