ProfessorRoush would like to call down a pox on all those garden authorities who have advocated various winter hardy boxwoods to be excellent landscaping plants.  A further pox on the "Big Box" stores who sell the cheapest boxwoods available and thus limit the selection of available cultivars to us.  Boxwoods are everywhere these days.  Southern Living, for instance, has an 18 page internet extravaganza on boxwoods as "the backbone of Southern gardens for centuries".   Boxwoods for landscaping.  Boxwoods as the perfect container plants. Trim and tidy boxwoods. Lavender and boxwood gardens.   Boxwood...BS, I say!
I jumped onto the boxwood welcome wagon a number of years ago when I grew tired of mustache landscaping with junipers and arborvitaes.  In Kansas, those two conifer stalwarts are plagued annually by bagworms, leaving the gardener only a choice between marathon hand-picking sessions or toxic wastelands.  During the landscaping of a new home, I went with less traditional choices for my front entry; large-leaved evergreens such as hollies and boxwoods. 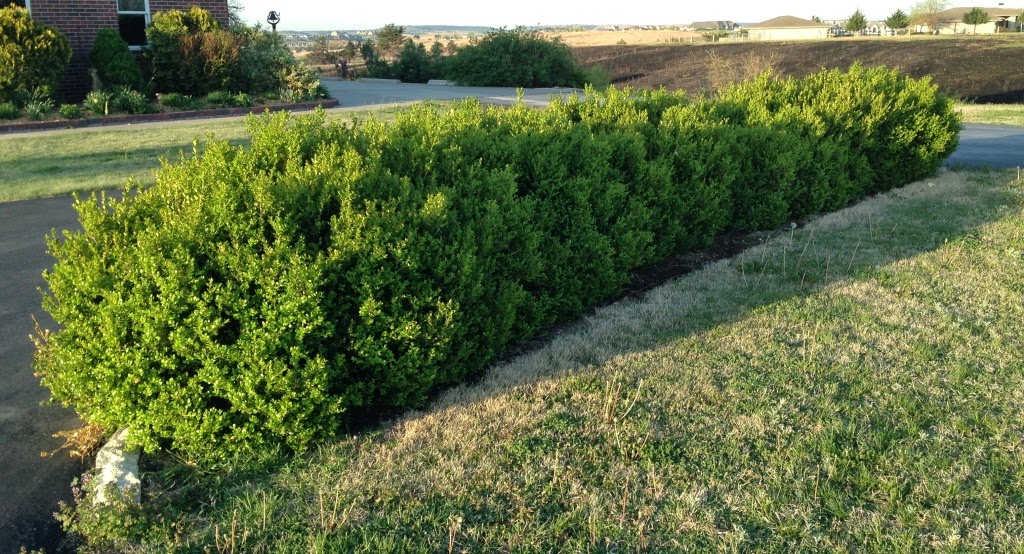 I was so enamored by the survival of my first boxwoods that when it came time to screen the wind near my front door and outline the circular driveway (or, if you prefer, to slow and divert the feng shui flow of qi in the area), I chose to buy 12 inexpensive Buxus microphylla koreana 'Wintergreen' plants to create a hedge.  I will admit openly that the effort has created a really functional low-maintenance hedge over the years, at times a bit winter-damaged as I've noted previously, but a very nice screen as pictured above.
Functional, yes , but undesirable.  You see, the one thing that most boxwood advocates fail to disclose is that boxwoods, at certain times of the year, smell like....well, they smell like cat urine.  Unneutered male cat piss to be exact.  If you realize the source of that stench around your house comes from the boxwoods, then search terms such as "boxwood" and "cat piss" will turn up any number of entrys about the problem, ranging from how it will diminish the sale value of your home, to sources where the authors claim to like the odor, claiming "it reminds me of happy hours spent in wonderful European gardens, surrounded by brilliant flowers, the hum of bees and the redolence of boxwood."   I'm sad to confirm that if you park your car in my circular driveway right now, the odor as you step outside the car will not remind you of happy hours in European gardens.  Until I read that the stench should have been expected, I thought my cats were using the area as a toilet.
Adding insult to injury, however is not beyond the reach of the most diabolical garden authorities.  One D. C. Winston, author of an EHow article I found titled "How to find a boxwood that doesn't smell like cat urine," is a prime example. The advice given in the article?  Avoid the Buxus sempervirens cultivars because they are have the strongest "acrid" odor.  Seek out the species Buxus microphylla.  Mr. Winston specifically recommended 'Wintergreen'.  Ain't that a hoot?
Take it from me,  don't plant boxwoods by your front door. Ever.
﻿
Posted by ProfessorRoush at 3:34 PM