As a comment on my last post, my fellow Kansas blogger Br. Placidus asked if my garden had "burst into bloom like a desert after a storm?" following the recent rains.  Yesterday, as I was mowing, I saw that it was indeed coming alive, new growth perking up here and there, and of course, weeds and more weeds everywhere!  I'm trying to stay ahead of the weeds, but the crabgrass is advancing on a massive front and I'm being flanked and overrun left and right.  There are a few sporadic roses blooming, primarily 'Polar Ice' and 'Iobelle', but many are showing a few buds and suggesting I should have hope for a late September R. rugosa rampage.

Oddly though, the plants that are the most visible bloomers right now are plants that I wouldn't have even tried to grow in my garden two decades ago, those I would have been afraid to attempt when I was solidly Zone 5.  The crape myrtles in the garden are all presently blooming profusely, beacons of color spotted around the garden.  In fact, Mrs. ProfessorRoush, peering from the gloom of the house during one of the recent rains, asked me if the bright red plant 80 feet away was a red rose.  Nope, Honey, that's 'Centennial Spirit', which annually reaches around 4-6 feet in my garden (4 feet in this drought year). and then dies back every year.  Thankfully, crape myrtles are one flower that rain doesn't seem to blanch or destroy.

The other crapes that I have, red and short 'Cherry Dazzle', tall and slender white 'Natchez', a lavender crape myrtle saved from a city bed destined for destruction, and squat purple-pink 'Tonto', are all blooming now as well.  'Tonto', pictured at right, sits as the lone tall plant in a bed of daylilies, anchoring the bed for me and drawing attention away from the weeds among the daylilies at this time of year.

The most surprising bloomer however, is magnolia hybrid 'Jane', one of the 'Little Girl' ‘hybrids developed at the National Arboretum in the mid-1950's by Francis DeVos and William Kosar.  A cross between M. liliiflora ‘Nigra’ and M. stellata ‘Rosea’, 'Jane' blooms about two weeks later than M. stellata in my garden, usually profusely in early April and usually just in time to get its petals browned by a late frost.  What most printed sources don't tell you, but I've seen several times, is that 'Jane' will repeat bloom, albeit less prolifically, in the fall. I've seen occasional blooms on my darker-pink 'Ann' as well, although she seems to be lacking them this year.  I did find one forum entry that discussed reblooming of liliacs, and one of the respondents indicated that M. stellata, M. liliiflora, and M. loebneri may rebloom in summer.  Since 'Jane' and 'Ann' are hybrids of the two former species, I guess it makes a little sense to see them rebloom.  Sporadic though they might be, that brief promise of magnolia fragrance in the off-season is a welcome gift from my garden.

When a Kansas drought ends.... 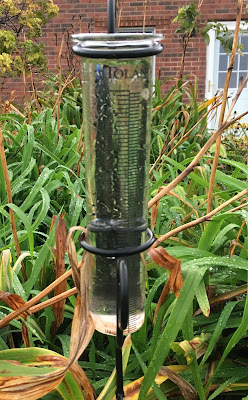 ...it really ends.  If you've been wondering where I've been, I've been in Garden Depression-land, with only time to spare on weekends for watering everything that I didn't want to die.  It has been bad between the drought and the winds that took out several trees in my yard, among them my beloved ornamental Red Peach tree.  The only bright-side of my summer has been that I only mowed once from mid-July to late August.  Dry grass is tolerable when the mowee, i.e. me, doesn't have to sit on a roaring lawn mower for several hours each week. 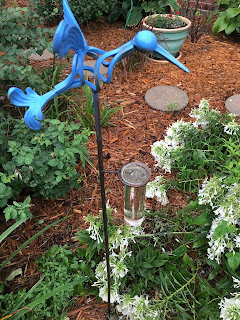 Two weeks ago, I happened to look in the local newspaper at the weather snapshot, to find out that, as I suspected, around 12+ inches of rain had fallen in Manhattan this year and we were 10+ inches lower than average.  So we had half our normal rainfall and all of our normal hot July temperatures by the middle of August.  I have been collecting weather radar pictures of storms going north and south of us all summer for the purpose of blogging about it, but couldn't bring myself to include you in my depression. 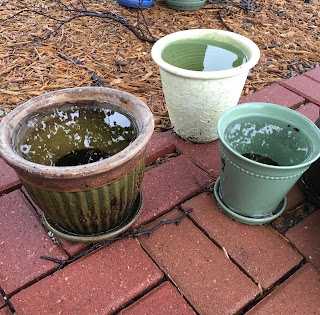 And then, surprisingly, it started to rain.  Yes, here, in the Flint Hills!  In the past two weeks, we had several 2-3 inch rains that probably totaled 10 inches so I thought we were back on track, although the paper yesterday said that we were still 6 inches behind normal.  I forgot that annual rainfall is a moving target but at least we were catching up.  Suddenly everything is green again and I've had to mow weekly the past two weekends.
But last night the skies fell in!  From midnight to 6 a.m., the rain overwhelmed all my gauges, including the 5" gauge in the front landscaping on the blue hummingbird pole (2nd picture from top) and the 7.5" gauge in the back of the house at the top right. If you can't tell tell from the pictures, both are filled to their rims.   I have no idea how much rain we really had.  The pots with plugged drainage holes, above and to the left, also filled up to their brims, but at that point they were probably splashing out more droplets than were staying in them.  So your guess is as good as mine.  All this water was dumped into what is known as the "Wildcat Creek Basin," flooding an apartment complex, the town soccer fields, and a shopping center on the west side of Manhattan.  We even made the national NBC news tonight!  And now, some chances of rain are forecast 6 days of the next 7.  Can somebody please control the spigot better? 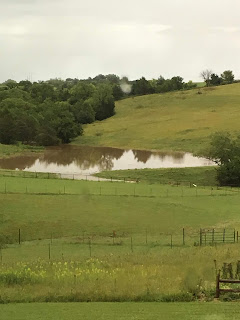 So, I'll try to blog from time-to-time again, since I have a garden and it seems to be green in places.  But I might get caught up in a whole series of new experiences.  For example, this morning, as I walked from the front yard around the house to the back, I was hearing the sound of a waterfall.  Waterfall>? Wait, what?  And then I realized; my neighbor's pond, which doesn't hold water and has been dry all summer, had filled up and was overflowing around the edge.  I, of course, rushed inside immediately to tell Mrs. ProfessorRoush that I had finally gotten her the garden water feature she's been wanting!
Incidentally, I thought about titling this blog entry, "When it rains, it pours."   Too cliche though, right?

Posted by ProfessorRoush at 6:55 PM 5 comments: