I find it odd that I have never blogged about one of first roses I ever grew; a rose that I purchased once and have grown at two different houses and in multiple places at each house.  That almost forgotten rose is the pink Shrub rose 'Therese Bugnet'.

Why have I neglected her for so long in this blog?  I suppose that part of the blame lies in the fact that 'Therese Bugnet' is an uninspiring rose (someone had to say it!).  'Therese Bugnet', in short, is the trailer park trash of the rose world, in my opinion.  Her large (4 inch) medium-pink semidouble to lightly double blooms flatten quickly and are quite untidy, with an occasional white streak in a petal to mar her beauty along with the mussed-up coiffure. She blooms loosely and profusely early in the rose season, and after that initial flush she is remonant, but she blooms in a miserly fashion, never without a bloom, but seldom with more than just a few.  She has a few small small thorns, almost not noticed, but often just enough to prick the unsuspecting.   Her mildly rugose foliage is dull and light matte gray-green, and she has little to no fragrance in my yard to draw the gardener to her, although opinions about her fragrance vary widely across the Internet.   In my first garden she also had a tendency to sucker all over the place, but in my current stony clay soil both bushes have behaved themselves completely. 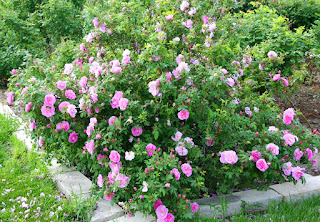 But she is also forgotten because she's so darned healthy and hardy.  She has a fabulous, beautiful early flush of blooms and then I never pay any attention to her until another year rolls around.  I've never sprayed that rugose foliage of  'Therese Bugnet' for blackspot, and she keeps all her leaves right up until fall.  Hardy to Zone 2, she has never exhibited the slightest winterkill in my region.  In fact, while I often find myself thinning dead canes out of other hardy roses each spring, 'Therese Bugnet' needs none of that.  I have two bushes that are 10 years old and I don't believe I've ever taken a lopper or pruner to her.  She is one of the first roses to bloom in the Spring, so despite the imperfect blooms, she is much appreciated at that time of year when gardeners are in the tight grip of groundhog syndrome.  In Fall, the leaves often turn a nice red-burgundy color, unusual among the roses, and her canes are dark red in the Winter to provide some nice color to a drab garden.  Winter, in fact, may be the best season for 'Therese Bugnet'.

'Therese Bugnet' is a hybrid Rugosa bred by Georges Bugnet in Canada around 1941.  Like her trailer park persona, her actual bloodlines are muddied, since Bugnet used a mixed pollen of 'Betty Bland' and R. hugonis and others for pollen and the seed parent has traces of  R. kamtchatica, R. rugosa, R. macounnii, and R. amblyotis.  She grows between 5 and 7 feet tall in my climate, and her vaselike shape is loose and informal, sprawling over neighbors in a friendly manner.  When I compare what other reviews say about Therese, I feel guilty that I may be a little too hard on her.  Comments on helpmefind.com are uniformly positive about 'Therese Bugnet'.  Suzy Verrier, in Rosa Rugosa, says she thought at first that the rose was "overrated", but that it grew on her.   I tend, myself, to prefer her virginally-white and more rugose sister, 'Marie Bugnet'.  And it may be that I am just better at recognizing trailer trash when I see it.
Posted by ProfessorRoush at 3:10 PM