Hi, Everyone!   I apologize for the long lapse in posting, but autumn has been moving along and the world is streaming past my eyes at the speed of life.

Both Mrs. ProfessorRoush and I agree (for once) that this fall has been a colorful one in Kansas; despite the national media predicting poor autumn displays in the usual tourist spots, we've been fortunate here.   As you can see from the back yard, photographed above last Wednesday, the prairie grass has great color this year and the garden is settling in and ready for cold.   And the cold is coming this week, lows down to 30º, highs in the 50's.  We should finally see a fairly hard freeze to shut down the final growth mania. 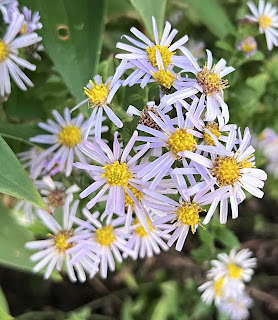 I hope, however, that this Aster frikartii ‘Flora’s Delight’ somehow survives the frosts.  I don't believe I've mentioned it before, but it's been a garden stalwart since 2004.  I seldom pay this plant much positive attention until now, when it lights up a corner of my front bed to the right of the sidewalk.  I spend most of the spring ripping it out and keeping it within a 6 foot diameter area.  It's one of those plants which should come with a hazardous warning label, but most web sources about it only suggest that it makes a good "container" plant.   Oh, yes it does, because if it isn't in a container it makes a fairly tall invasive groundcover to about a foot high!  By July, however, it stops being a bother and I forget all about it. 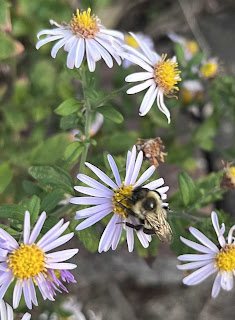 I forget about it until now when those soft lavender blue blooms highlight those bright yellow centers and catch my eye.  Aster frikartii is also attractive to bees and is probably one of their last source of nectar before winter.   This cold bumbler stood fairly still for the camera, not moving until I almost touched it.  And now I feel guilty because I should have let this aster spread and bloom more; for the bees, you see.

We finally, finally received a nice rain this week, about 3.6 inches total over a long night and day of rain, so I hope the garden will go into another Kansas winter well-hydrated and ready to rest. 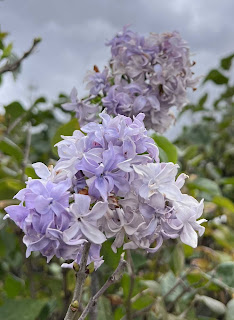 And I hope the garden stops the weird antics that fall sometimes brings.  I've been worried about the row of lilacs to the west of the driveway pad.  Several of them, primarily the older Syringa vulgaris, have leafed out some of those precious green buds after they dropped their summer leaves and a couple even bloomed, like this 'Nazecker' light blue lilac.  I won't minimize the sublime joys of smelling lilacs in October, but I also don't need to constantly feel like they've sacrificed their last for me.  I suppose the chance always exists that I won't be around to smell lilacs next spring, but I'm planning to be here when the snows melt and the lilacs bloom next April, the world right and everything in its own time, just as it should be. 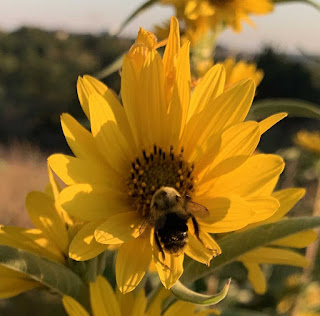 Ladies and Gentlemen, boys and girls, dogs and bees, I give you the crowning glory of the Kansas fall prairie, the Maximilian Sunflower (Helianthus maximiliani).   On the prairie near me right now, one can see lots of yellow flowers blooming, foremost being the light-yellow green of the native goldenrods, but nothing outshines or is taller than the Maximilian sunflowers.   Standing out hundreds of feet away, each clump betrays the location of a site of disturbed earth, the sunflower a sure marker of soil chaos.   Bees and humans alike are drawn to it, the screaming color calling across the ocean of drying prairie grasses. 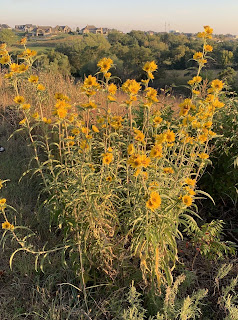 This clump came up near my burn pile.   There's a smaller group in the middle of the unmown area of the back yard (my so-called "rain garden"), but it is this plant at the back edge of the garden that begs for attention.  And, as you can see above, it got attention from this very busy bee photobombing the flower.  It also got attention from Mrs. ProfessorRoush, who posed with it for me, but I will not share the beauty of the former in this blog, Internet privacy and all being what it is.  I found it interesting that the sunflower and Mrs. ProfessorRoush are almost identical in height, 5 feet tall or so. 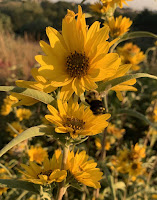 The bumblebee that attacked these members of the Aster family was fortuitous for my camera, arriving just as I moved in to photograph the flower closely.  In a month these flowers will be bountiful seedheads, full of energy and a good forage crop for livestock and deer. 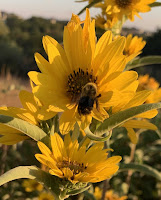 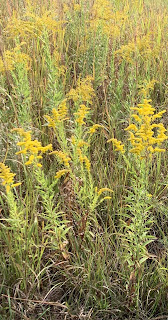 You can see here what I mean about the goldenrod.  I'm not good enough at quick identification to tell you if this is Prairie Goldenrod or Canada Goldenrod or another species, but this is as yellow as it gets and the brightness fades quickly like the plants in the background here.

Between the bad press given to goldenrod, and the happy beaming face of the Maximilian Sunflower, I've got to choose the sunflower every time.   And so, it seems do the bees.  The only insect I've ever seen on goldenrod around here are the goldenrod soldier beetles.