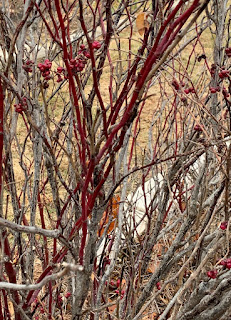 The 4th season, winter, is much maligned by most gardeners and ProfessorRoush is no exception in that regard.  As I grow older, my enthusiasm for colder weather ever ebbs and my casual glances at more southern states on the map grow ever longer.

Winter does, however, provide a gardener with one benefit in spades: clarity.  Loss of foliage and flower exposes the skeleton of a garden, highlights her hidden secrets and lays bare the flaws of our efforts. 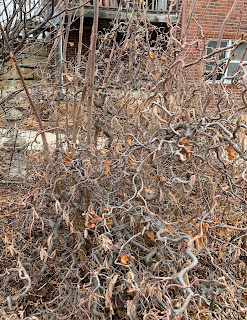 I noticed, today, how Coralberry (Symphoricarpos orbiculatus), a common weedy shrub on the prairie, has incorporated itself unnoticed into one of my 'Therese Bugnet' rose bushes, the red fruits of the wayward shrub blending cheerfully with the burgundy-red new twigs of the rose (photo at top).   The season also throws back the curtains on my Harry Lauder's Walking Stick (Corylus avellana 'Contorta'), revealing just how badly the straight suckers of the grafted plant launch themselves skyward among the crooked branches I crave (photo at left).  Every spring I remove an armload of these straight stems and they immediately resprout to spoil the symmetry. 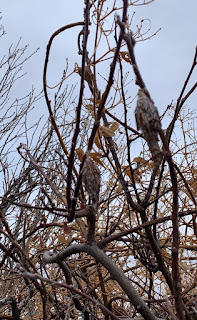 Winter exposes the activities of insects unseen and nesting birds in clear detail.  I found these bagworms on the top of a trellis, hanging from, of all things, a wisteria vine that provides the trellis shade in summer (right photo).  How, oh how, did these bagworms know that the wisteria would be unprotected while their preferred perches, the junipers of my garden, are all sprayed each June? 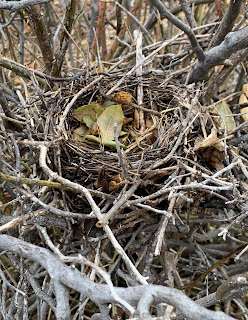 This nest, in my 'Banshee' rose bush, is a repeat homesite for birds, although I forgot to look here this past summer to see if it was active.  One locates nests in the summer by observing the birds, not the plants, for their feeding patterns, protective dances, and loud scolding of passersby.  In the winter, a nest like this hints at a life unobserved, leaving a gardener to imagine all the possibilities it hid.  Was there a successful fledge?  Did a cowbird insert an imposter into this family?   I'll never know. 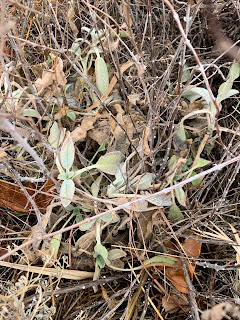 The gardener resolves, each year to do better as we see the bones left behind from a summer's toil.  This Lamb's Ear (Stachys byzantina) escaped my best efforts to root its invasive nature from my garden (right photo), persisting even now in the protective embrace of an enormous Russian sage.  In summer, one sees the forest and not the trees.  In winter, one is left with the details, the struggles of life laid bare, ground gained and lost, homes built and vacated.  Clarity is what a gardener gains in winter; clarity of our highs and wins, and clarity of where we must improve.
Posted by ProfessorRoush at 1:57 PM No comments: 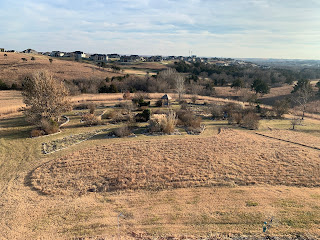 There are so many facets of a garden's beauty; bountiful blooms, flourishing foliage, silent solitude, love and laughter.  Seasons change a garden, and the garden changes with the seasons and even within the seasons, from frosted to flooding, sun-baked to Siberian.   During the majority of my winter, my garden is dominated by tan, exasperating ecru, bland and banal, uninspiring and forgotten.  The beauty of some days are left to sunshine and endless skies, bathing a garden that is a mere memory of the gardener's mind. 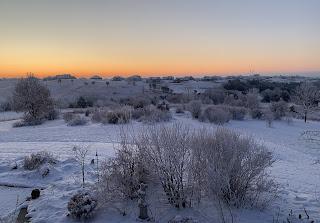 The garden also, can change the seasons themselves, signaling senescence during the bounty of summer or hope in the midst of frigid death.  Last week, it was snow bringing hope, thick and wet, turning tan to white in an hour, leaving behind a frozen, windswept tundra to greet the next dawn.  Hope is hard to find in such a scene, but I know, deep within, that a few days, a few weeks of this slumber, and the garden will awaken, refreshed with the moisture it was needing so badly. 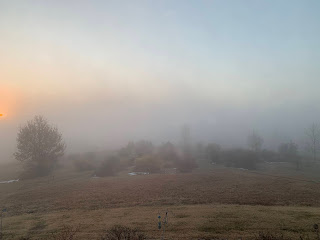 This morning, this happy Sunday before Christmas, it was fog, cloaking the garden in mystery and calm, evoking the remnants of the color and joys of summer for a brief moment.  I awoke to this solitude, neighbors vanished behind curtains of mist, a shy sun vainly attempting to assert its influence from behind the curtain, masked in glory.  Could there ever be a more peaceful scene, a more expectant pause in the harshness of winter? 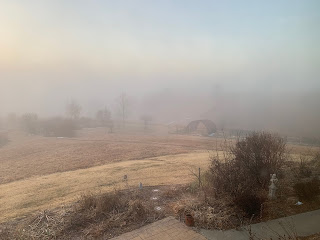 The garden, she sleeps, damp and warm within the clouds today.  My strawberries, my beloved berries, wait for spring beneath a blanket of straw, in the arms of the shade house above them.  And around, all around, the prairie itself hums with life hidden deep in the soil as roots hoard resources and renew, at the ground where chickadees search for the last seeds of summer, or in the air above where the hawks ceaselessly hunt.  Life in the deer that sample the shrubs, or in the mice that tunnel under the snow, the prairie is thriving despite the cold. 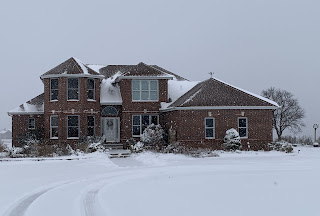 All of us, the strawberries, the garden, the fog, and me, we all know that today is a respite from reality.  Winter is officially declared and must have its time before spring pushes it to memory.  There will be more snow, more shoveling to come before the Triggering that wakes up the earth.  The snow last week passed in a few days, my temperate climate as always freeing the roads and soil to the rays of the sun.  Me, I'm just thankful this season for this morning between, for this muted sunshine, for this life of plenty, this life in the garden.
Posted by ProfessorRoush at 10:14 AM 3 comments: 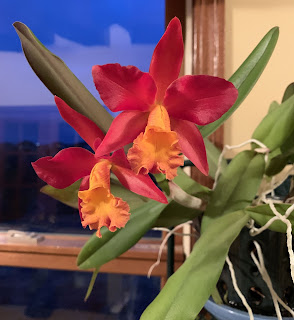 Once upon a time, there was an avid gardener who spent all his time among green things, indoors or out.  Ourdoors, there was a prairie paradise of native grasses and cultivated beds.  Indoors, over 20 thriving orchids and a dozen Zygocactus purified the air and lighted souls.

ProfessorRoush is a terrible indoor gardener these days.  My former indoor abundance has suffered from inattention and dwindled to a few plants.  First, there was the Great Winter Plant Massacre of about a decade ago, when we left home for a Christmas vacation and I turned off the thermostat by accident when I meant to turn it down a few degrees.  We came back a week later to a house hovering just at freezing.  No burst pipes, thankfully, just one cracked toilet and a bunch of dying orchids.  A pair of Zygocactus survived from a wilting, blackening multitude of formerly happy plants.

Subsequently, I never really revived my indoor plant passion and the current plants that share space with us likely suffer under the belief that I've abandoned them to a harsh, unforgiving desert, so infrequently do I water them.  Oh, for a time, I always put the Zygocactus outside during summer beneath the Redbud where they could experience fresh air and shade, but even out there, this gardener's attention wandered and they dwindled during drought periods and were subject to insect attacks. 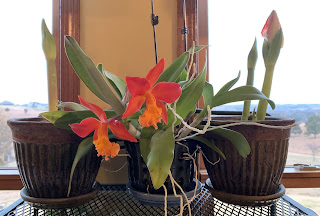 I have been reborn as an indoor gardener this year, however, by the surprise appearance of the fabulous Cattleya pictured above.  I never noticed the spikes as they formed, and suddenly, on December 1st at 7:00 a.m. while I was feeding Bella, there were these two bright spots against the early morning sky.  Blooming for me for the first time, this struggling little guy was a purchase from Marie Selby Botanical Gardens in Florida in 2014 and it has hung on despite the worse conditions I can muster.  Amazingly, I somehow retained the tag, which correctly identifies it as Cattleya hybrid Lily Marie Almas "Sun Bulb" orange.  What a gift from the sun gods she is, and fragrant too!  Obviously, I couldn't let her bloom alone, so I recently purchased a pair of Amaryllis bulbs and potted them up, preparing to brighten our New Year with their bounty. 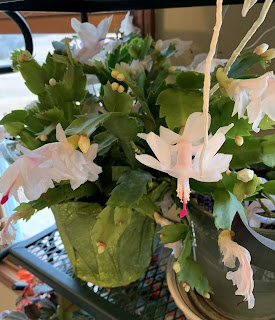 I have resolved to take better care of my indoor plants and improve my too-rare watering schedule; hopefully, however, refraining from overwatering.  I retain a few other plants at present, red, fuchsia, and white Zygocactus, another reasonably healthy orchid that isn't yet showing signs of bloom, and a struggling little orchid youngster that will likely soon give up and perish.  The white Zygocactus pictured here is new, a replacement for one lost outdoors this summer, and I'll soon repot it into something more suitable.  I will, I will, I will promise to keep a few healthy and enjoyable plants indoors to see me through this winter, but I will not, will not, mess with the thermostat or harbor another forest of orchids indoors.  Moderation, in gardening as in life, is the key.
Posted by ProfessorRoush at 9:24 AM 3 comments: