Who's Tired of This Crap? 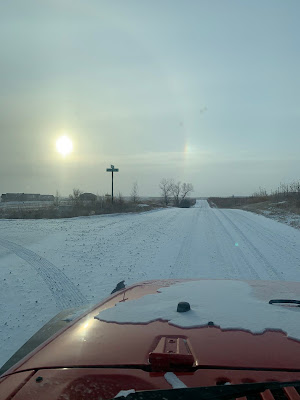 Seattle, up there with the most snow in 50 years, are you tired of this crap?  Texas, covered in snow and freezing temperatures, how about you?  Upper Midwest, reaching streaks of record subzero days, are you about done shoveling the white stuff?   Well, guess what, ProfessorRoush is not near done.

I'm not near done because, with classes cancelled tomorrow, I can use it as an excuse to pick up groceries and supper and come home still early enough to see the sun cause a snow rainbow at 5:06 p,m.  I took this picture from the window of my Jeep just before I turned onto our road.  How rare to see a partial rainbow here in the dying light of a snow day; rarer still on a snow day where there was no snow predicted at all.  With all our science, with all our computers, we still can't predict snow 12 hours ahead. 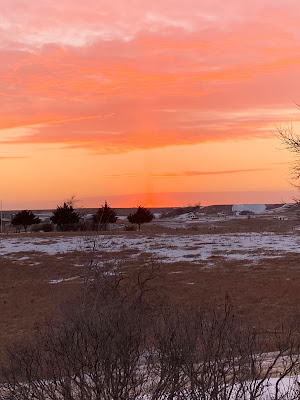 I'm not near done with this crappy weather because exactly an hour later, at 6:06 p.m., my neighbor called me on the phone to make sure I looked at the sunset, a sunset with a magnificent pillar of fire leaping from the sun to the sky.  I hung up on him so I could snap this picture on my iPhone camera.  So that, gracious be God, I could capture the heavens and earth in golden embrace as the clouds turned pink in embarrassed glory.  I'll trade a so-so day of 20ºF temperatures for another subzero morning if I have any chance at another picture like these.

And I'm not near done because I want, frankly, all the global warming fanatics to reap the whirlwind.  I've heard it up to my ears with global warming causing unstable weather patterns and cold days instead of hot ones, and I'm flabbergasted every time I hear that we've only got 20, 10, 5 years left before global warming climate change caused by industrial pollution cow flatulence ruins the planet.  Guess what; the Arctic still has an ice cap and Polar Bears are not yet extinct.  I haven't yet had the July Kansas sun cause blisters on my arms, but I'm pretty sure if I stuck my hand out the door for 10 minutes right now, I'd be pecking at the keyboard tomorrow with fists instead of fingers.  Tell you what, how about an experiment?  Let's all take off our clothes this May and live outside in the back yard for a year and see whether we die of heat or hypothermia first?

Ewwww...strike that thought.  That mental image is not a pretty Kansas picture like the ones above.  How about we all just live and let live, turn down our thermostats and our emotions right now to save respectively a little energy for our neighbors and a little angst for ourselves, and just calm down and enjoy the sunset for awhile?

Posted by ProfessorRoush at 7:33 PM No comments: 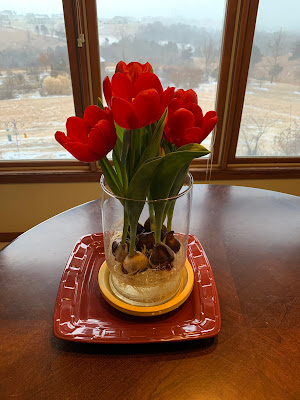 Today is definitely not a Super Sunday.  For a Kansas gardener, it's a Mediocre Sunday, and if the gardener decides to curl up and find a good book, it could possibly become an Okay Sunday, maybe even a Fine Sunday, but at 7ºF outside at 12:00 p.m., it's not going to become a Super Sunday, football frenzy or not.

I had been wanting one decent snow this winter, enough to make everything clean and smooth and white and I still haven't seen one.  What's on the ground now is just a little dusting, a little frosting on the prairie cake; just enough to need sweeping off the sidewalk but not enough to get out a shovel and struggle.  The primary dampening of my spirits, however are the result of the frigid temperatures.   We've had a mild winter, hardly a Zone 6 climate up until now, but yesterday somebody shut the freezer door and the temperatures plummeted alongside this dry snow.  More pertinently, there are some highs-in-the-teens and lows in the subzero temperatures predicted over the next 10 days, back to a true Zone 5 climate that we haven't seen in several years.  Last year at this time I was already clearing perennial beds on 55ºF afternoons. 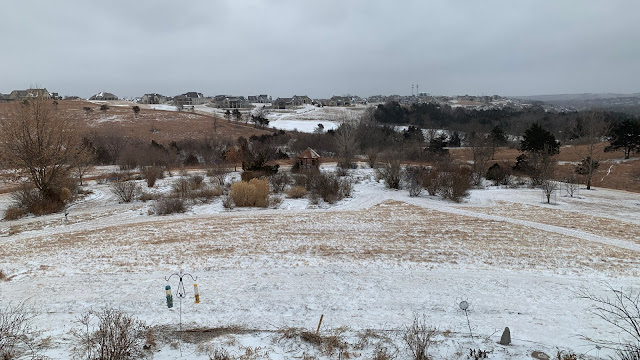 For the record, I will watch the football game this evening, although I really don't know or care who I'll be rooting for.  Yes, it would be nice to see the long-suffering and local-to-me Kansas City Chiefs win another behind Mahome's spectacular passing accuracy and their daunting defense, but I also wouldn't mind watching 43 year old Tom Brady show Patrick the difference between how an old bull and a young bull approaches the field.  On the other hand, Brady was born in 1977, the year I graduated high school, so neither one is old enough to really appreciate the old bull and young bull joke genre that I'm alluding to.

Also for the record, yes, I cheated on these beautiful forced tulips that are currently in the middle of our kitchen table.  The local grocery store had these ensembles of glass, greenery, and glory for $9.99 the other day, priced low enough for even my miserly soul to consider worthy of a sawbuck.  Seven tulip bulbs to brighten Mrs. ProfessorRoush's Valentines day and keep me in her good graces, and then later I'll plant them in a pot with good soil and move them to the garden this summer.  I usually force a few bulbs on my own, but this year I just haven't found the urge or the time.  When these fade, however, I'm now inspired to go cut some forsythia and flowering almond branches to bring into the house and force into bloom.  Maybe the spring colors can provide us a Super Sunday later in February.