My ongoing battle against Rose Rosette disease, and the annual Kansas summer scorch, has led to a few casualties over the summer, with a corresponding number of empty spots in my garden.   "Beggars," as they say, "can't be choosers," and consequently when a good friend generously offered me several established 'Sunny Knockouts" that she was planning to discard, I decided to take them for filler.

I already have a 'Carefree Sunshine', or 'RADsun', in my garden, a lone rose placed in my "peony garden" in the shade of an Oak tree.  It survives, barely, and gets absolutely no care including a lack of pruning.  'Carefree Sunshine', for those who know it, was bred by Bill Radler before 1991, and is a light yellow shrub rose with semi-double blooms that form in clusters.  In my garden, it has reached about 3 X 3 feet in size, and it remains there, shaded almost out of existence, but clinging to its square foot of soil without being a nuisance.  It seems to be reasonably resistant to blackspot and is cane hardy throughout most winters here.  I originally planted it to please SHE-WHO-PREFERS-HER-ROSES-NOT-TO-BE-PINK (Mrs. ProfessorRoush), and despite that knock (sic) against this Knock Out cousin, I would like the rose more if it had more petals and shined a little brighter.

'Sunny Knock Out', or 'RADsunny', is a different rose than RADsun, a paler yellow, and single (4-8 petals).  Also bred by Radler, it was introduced by Conard-Pyle in 2008, a yellow addition to the Knock Out rose family.   I chose three plants from my friend, which are now planted in several prominent spots in my garden, spots that I will probably regret if both the roses, and I, survive the winter to come.  Don't get me wrong, I appreciate my friend's generosity, I just don't want to admit that I've sunk to such depths of despair.

I am consoled by the thought that these roses, like many of the Knock Out family, are probably overly susceptible to Rose Rosette and will succumb to that decrepit virus, so that someday I will be as likely to find a Dodo in my garden as a 'Sunny Knockout'.  Just yesterday, dropping my daughter at her apartment, I noticed that one of three fully grown 'Knock Out' roses outside her front steps was badly infected with Rose Rosette and likely to spread to all the others that adorn her entire apartment complex.   Given my usual fortune, my new 'Sunny Knock Out' bushes will likely survive however, and thrive to brighten Mrs. ProfessorRoush's days for years to come, while I loathe their presence every time I pass them.  Such is the plight of the desperate gardener.
Posted by ProfessorRoush at 12:24 PM 3 comments: 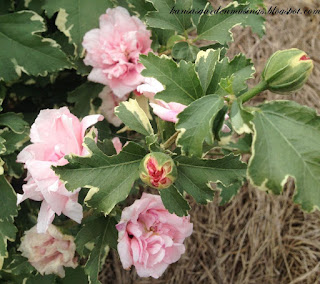 Wow, ten days since my last post?  Time flies when my attention drifts and life runs quickly.  My wandering affections for the garden were jerked back in line yesterday as I was mowing, however, by a glimpse of this little bush, a beauty shyly screaming for attention against the prairie backdrop.  Stopped the mower short, I did, and jumped off just as quickly to snap an iPhone picture or three. 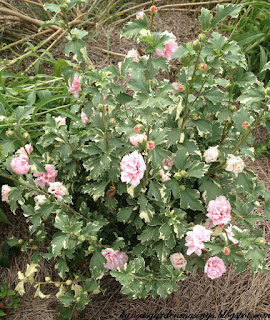 This is Rose of Sharon 'America Irene Scott', otherwise known in the nursery trade as Sugar Tip®.    I bought her at a big box store this spring as a filler for the center of a new bed.  I was actually a little reluctant to purchase her, not because of cost or condition, but because I rarely like the flower colors that are commercially available with variegated foliage in many species.  One of my many pet peeves (which should be distinguished from the peeved pets that are my patients) is that breeders so often ruin a great flower trying to "improve" it by adding variegated foliage.  I was also afraid that the pink tones of Sugar Tip® would be a bit pale and uninspiring.  I brought her home, nonetheless, hoping that the deer would leave her alone despite her appetizing appearance. 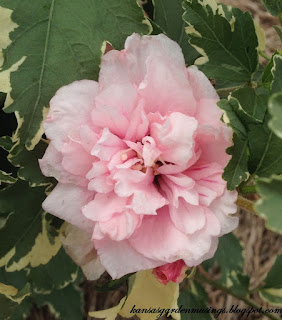 I was, I now think, flat wrong this time to cynically doubt the marketing savvy of the horticultural world.  She's a small bush at the end of her first summer, only 2.5 feet tall and a little more slender, but Hibiscus syriacus Sugar Tip® is blooming her young limbs off, and the double blooms are sufficiently pink to perfectly complement the green and cream foliage.  I can't wait to see her in full bloom at her mature stature of 8 feet X 6 feet.  The petal color is of that demure, embarrassed pink tone best seen in the early spring in roses such as 'Maiden's Blush', otherwise known as 'Cuisse de Nymphe'.   The French should market this variegated Althea as  'Cuisse de Nymphe Dans la Dentelle';  "Thigh of a Nymph in Lace".  Qui, Mon Ami?

'America Irene Scott' was patented (US PP20579 P2) in 2009 by Spring Meadow Nursery Inc.  Hardy to -20F, 'America Irene Scott' was discovered, according to the patent, in a controlled outdoors nursery by Sharon Gerlt of Independence Missouri in 2001 as a natural branch mutation of 'Lady Stanley'.  I was, unfortunately, unable to learn more about Ms. Gerlt or why she named the plant 'America Irene Scott', but The Plant Hunter, a blog by Tim Wood of Spring Meadow Nursery, indicates that Ms. Gerlt may be an "amateur plants-person."   If she is indeed an amateur, she has a great eye for plants.

Please, Lord, make me as lucky in my own garden.
Posted by ProfessorRoush at 12:04 PM 3 comments: 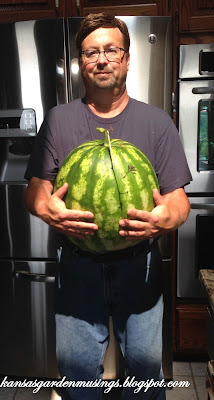 Plank. Plunk.  Plink. Tink. Thunk.  Thuuuunk.  Treading carefully and repeatedly bending at my waist in the massive maze of vines, I channeled my gardening ancestors and plunked each globe-ulacious fruit, listening carefully for the deep base note that signifies maturity.  Of the most contralto, dullest-toned specimens, I examined each vine for drying of the opposite ancillary tendril and carefully rolled each large melon over to examine the extent of the bleaching or yellowing of the ground contact area.  Finally, offering an unwhispered prayer to the melon gods and dancing the melon-growers boogie, I chose what I believed to be the most ripe, the most worthy specimen, hefted it onto my shoulders, and began the long climb up the hill to the kitchen.

I always find it difficult to determine when watermelons are ripe.  Cantaloupes are easy, falling from the vine into your arms as they ripen, but watermelon selection is an art, a fine skill known only to a few, with secret gestures and a separate language to enhance its mystery.  A single solitary melon, alone in a garden, is a time-bomb with no clock, a conundrum complicated by lack of peers for comparison.  A covey of Citrullus sp, nay a horde of them, presents an easier path, a symphony of notes out of which one need only pick the bassoon from the clarinets and trumpets.  A solid yellow bottom on a melon is as indicative of readiness as the scarlet hindquarters of a mandrill and suggests similar ripeness.

I cheated this year, planting two 'Crimson Sweet' seedlings from a local market rather than growing my melons from heirloom seed and nursing them through their infancy.  Perhaps because of that shortcut, or more likely because of the steady rains this year, I've got a melon patch that is overtaking the garden, smothering first a 'Brandywine' tomato, then the jalapenos and salsa peppers, and now engaging the main body of the tomato army.   The massive leaves hide over a dozen melons, with six of the latter as large or larger than this first 36 lb giant.  Thirty-six pounds of dead water weight that I carried in a single rush up the hillside to deposit, the provider home from a successful hunt.

Cleaving it, divulging its secrets, I presented Mrs. ProfessorRoush with the reddest, sweetest, most watery treat known to mankind, a praiseworthy pepo portending pleasure.  The perfect mesocarp and endocarp exposed, we have gorged for days on this single specimen, groaning in gloom at the thought of tonnes of melons yet to cross our palates as September saunters on.   Others, friends who will soon avert their eyes and cross the street to avoid us, will benefit from the bounty as we become oversatiated and tired of the taste of melon.  Only the coming frosts will save them, and us, from overfrequent urination and sugary slumber.  Only thoughts of coming winter remind us, and them, to treasure this nectar while we can, to celebrate liquid lushness in the waning days of summer.

Posted by ProfessorRoush at 6:00 AM No comments: