I'm sorry, friends, that I haven't posted in such a long time.  I've been emotionally disengaged from my garden since the last days of April, lo those many Kansas days ago.  Disengaged since the late hailstorm ruined my flowery May.  Roses, irises, peonies; I've missed them all. Fruit, any fruit, was nonexistent in my garden this year.  No strawberries, grapes, blackberries, apples, peaches, and but a few cherries. You'd think that the usual summer daylily bounty wouldn't have been affected, but even the daylilies were subdued, either from the hail, or from all the excess rain.  Yes, to add injury to the hailstorm, my summer was filled with rain, normally welcomed in a hot July, but this year the rain just added misery; sprouting weeds everywhere, making a mess of the vegetable garden, and drowning the tomatoes and peppers.  We are officially, currently 8 inches over our average annual rainfall of 24 inches.  Rain is normally viewed as a blessing here, but 1/3rd more rain than normal on a garden that I've primarily filled with drought-tolerant plants is not a positive development. 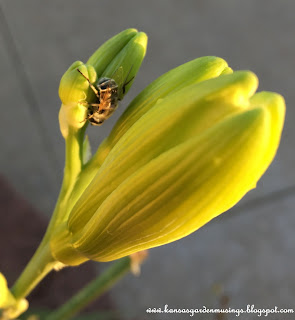 The weather, of course, isn't my only excuse for a lousy garden.  There has been competition for my attention by events at work and by life in general, both of which couldn't be put aside as easily as deadheading or fertilizing.  My limited forays into the garden this summer have been to attend to seemingly incessant mowing needs and by occasional blitzkriegs against the hungry hordes of weeds, the latter motivated whenever I couldn't see the normal plants for the wild grasses and pokeweed and thistles popping up everywhere.

I'm also ashamed to relate this to my fellow rosarians, but you might as well know now that I have lost the battle against Rose Rosette disease here.  I've diligently pruned it out as I've discovered it, but as the hot days of August arrived, it became apparent that almost all my modern roses have succumbed; nearly all the Easy Elegance roses, English roses, Canadians and, worst of all, most of my beloved Griffith Buck roses.  Anything with modern breeding, including some "less-rugose" Rugosa hybrids, has abnormal branching and thorns from hell.  If there is any solace, it is that the 'Knock Out' hybrids perished first. 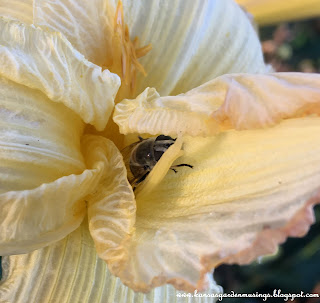 I'm trying, right now, to regain a smidgen of enthusiasm and to reengage with my garden.  I've tried to relish the bright spots during a dismal summer, chief among them the 'Beautiful Edgings' daylily pictured here.  It has bloomed almost incessantly for 4 months now, an ever-blooming daylily if ever there was one, an offering of hope that I cling to with each new daily flower.  This morning, as the fall temperatures start to move in, I noticed that the last honey bees are using its spent blooms for night shelter, slow to move until the sun warms the petals.  And the center picture shows the few remaining buds on the plant this morning, the last apologetic gifts of a graceless garden.

I intend to rebuild this winter, to start anew in any number of spots.  I've chosen to delay my efforts in favor of the "nuclear option," seeking the help of the first frosts to chase the marauders from my grounds and clear the lanes of counterattack.  Next spring, I will see a new garden or freeze in the attempt, less rose-focused but still flush with Old Garden Roses and Rugosas, empty holes filled with low maintenance shrubs and grasses, beds simplified.  And I'm going to plant as many divisions of 'Beautiful Edgings' as I can manage.
Posted by ProfessorRoush at 11:16 AM 6 comments: