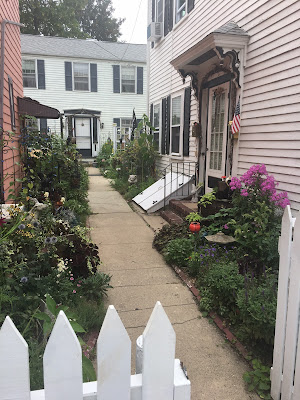 ProfessorRoush was away this week, visiting the Birthplace of Freedom;  Boston, Massachusetts.  Yes, I walked the Freedom Trail and I saw Plymouth Rock, and I crossed the John Fitzgerald Kennedy Presidential Library off my bucket list.  For those who care, I've now visited 5 presidential libraries in my lifetime and JFK's is the best, although I think the image of JFK they chose for the 100th anniversary of his birth, showing him with fat jaws and in sunglasses, is unflattering and jowl-ey.  But I guess they didn't ask my opinion.

I didn't do any personal physical gardening this week, nor, I must confess, did I visit a single public garden.  But since the NorthEast has been well-supplied with rain, I did spend some time admiring the health and vitality of a number of gardens, including the perfectly-maintained alleyway garden I saw in Salem, MA that is pictured above. As moist as things were, I was interested that the phlox here showed no signs of mildew at all. 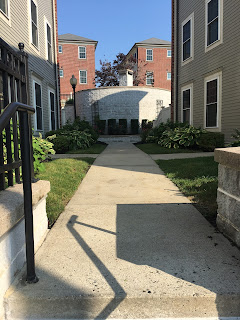 Private lots are small in all the cities there, so, in fact, alleyways and hidden gardens were the main attractions in the area.  Otherwise, I rarely saw more than a windowbox or container in most of the city.  This shady courtyard near Bunker Hill, however, was well sited for the hosta grown there as focal points. 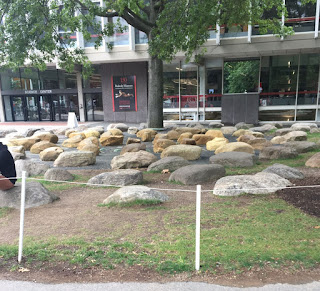 One of the reasons for the visit was to expose a precocious nephew to the possibilities of Harvard and MIT, so I spent time on both campuses.  I was, frankly, not that impressed by the tour of Harvard, which never bothered to verify if my nephew even showed up for his scheduled tour and never took us into a single building.  I am limited in my admiration of expensive architecture if I'm not allowed inside the buildings.  I did find, however, Harvard's use of boulders as a student gathering and sitting area quite innovative, however uncomfortable it might be in cold weather or for long sitting periods. 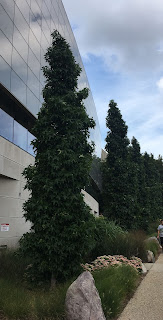 I was much more impressed by MIT, which seemed to actually care if we kept our tour date.  A wonderful admissions director, Mr. Chris Peterson, gave a lively and informative presentation on MIT and its programs, and then we were led on a tour by a complete nerd, an astrophysics student who hailed from Oklahoma, that included a look INSIDE the labs and buildings and provided a broad look at student life on campus.  Kudos to the MIT admissions team for putting together a great program and to the entire university for a unique atmosphere.  And further congratulations to the landscape designer who included these columnar Sweet Gum outside the student activities building at MIT.  They are fabulously healthy and the first ones I'd ever seen.  I was salivating about the fall coloring they must exhibit.  Where do I get one? 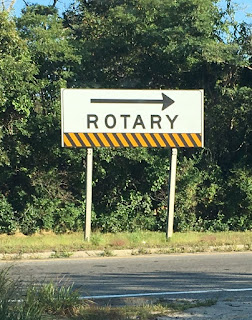 On Friday, I bid farewell to the Northeast and its strange set of quirks, which included labeling each "roundabout" as a "rotary."  I've heard of rotary as a noun referring to an old telephone, but the first time I saw one of these signs, I though I was lost and being directed to the local Rotary club.  To further confuse the issue, some areas were labeled as rotaries when I never really saw a complete circle emerge from the traffic pattern.  And what happened to the strong Bostonian accents I was wanting to emulate?  The entire area is so cosmopolitian and diverse these days that I only talked to one individual with a classic Bostonian accent in five days in the area.

Now, I'm back to the prairie, staring out the window at a dew-covered overgrown lawn bordered with weedy flower beds that both need attention.  And where else can I watch a pack rat playing blatently on my front steps at 8:00 a.m. in the morning.  Just another thing one my to-do list;  bait the pack-rat traps!
Posted by ProfessorRoush at 9:24 AM No comments:

If I were a Native American child on the Kansas prairie, or perhaps if I were any current child who occupies these arid grassy deserts, my favorite plant might just be the Catclaw Sensitive Briar,  Mimosa quadrivalvis  L.  var. nuttallii  (DC. ), a low-lying perennial that is widespread over my native prairie plot.  It blooms in late May-June here, before the grass reaches high above it to blot out the sky, its pink puff-heads screaming for attention alongside the new shoots of bluestem and Indian grass, and its 4-foot long branches spreading through the prairie.  The yellow ends of mature flowers are the anthers.

Sensitive Briar is a member of the bean family, the Fabaceae, the latter scientific nomenclature sounding not so much like it describes a squat languorous legume as a pretentious ancient Roman dynasty.  Perhaps Sensitive Briar has a right to be a bit pretentious.  It is very nutritious for livestock, who seek it out and overgraze it, making the presence of Sensitive Brier an important indicator of overall range condition.  Some sources refer to it as a "brier" rather than a "briar," and after some searching, I admit that I will have to accept continued mystery about the proper form of reference. Perhaps Thomas Nuttall, the 18th Century English botanist honored by the subspecies name, could enlighten me if his spirit were to pass by this part of the continent. 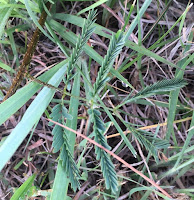 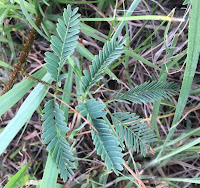 The "sensitive" part of the name comes from the plants response to touch, an action scientifically termed "thigmonasty", although I don't know why it would be considered nasty unless one considers the impertinence of the touchers.  It folds its leaves from open, like the photo at the left, to closed, as seen at the right with the merest touch of child or wind, and also at night.  Other common names for the plant, Bashful Brier or Shame Vine, also refer to this thigmonastic action.  Thus, its attractiveness to children, who seem fascinated when they discover or are shown this little moment of cross-species contact.  I wonder, if such moments were the first introduction of many children to the world of plants, would ecology and Gaia be more prominent throughout life in our subsequent actions and thoughts? 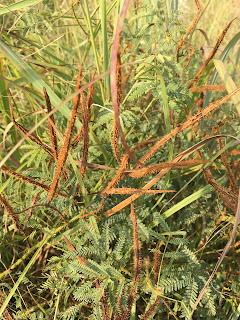 The "catclaw" of the common name refers to the later pods of these flowers, their prickly nature making them far less attractive to children later in the summer.  These do not seem to cling to clothing so much as they scratch at anything in their vicinity, particularly any delicate little bare legs of children playing hide-and-seek in the tall prairie grass.  I suppose, like most of nature, one must always take the good with the bad, the rose with its thorns, the Catclaw Sensitive Briar with its pods.
Posted by ProfessorRoush at 6:29 PM No comments: