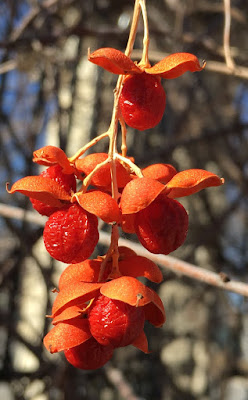 There is, in my mind, no sustaining solace in the drab brown of a Flint Hills' winter.  Oh, I could ramble about for a few paragraphs extolling the virtues of the subtle hues of amber and gold and taupe in my winter landscape, but then that would be "Fake Blogging."  Just as "Fake News" has joined the lexicon of our political debates, "Fake Blogs" should be called for what they are; ill-conceived attempts to paint pictures that don't really exist.  Fake blogs wax eloquent the delicate beauties of bark when there are no flowers or foliage to distinguish one ice-laden tree from another.  Fake blogs discuss the delicate dancing of grasses as a blizzard bears down and smothers the garden.  Fake blogs pretend that browsing glossy garden catalogs is a suitable substitute for the feel of warm earth in your hands.

I wait in January, interminably it seems, for the smallest, briefest indication that Spring is coming.  A flash of blue from a bluebird, a hint of green in the rushes, and my heart beats faster and my spirits lift.  Difficult to find, those moments, as Yoda would say.  When the snow melts, there is a brief period on the prairie when the grasses have enough remaining moisture to display their mahogany and umber undertones.  Then dry in a twinkling, the rolling hills of brown stretch to the horizon, dead grasses blending individual hues to a bland carpet of boring.  Life is color, death is drab. 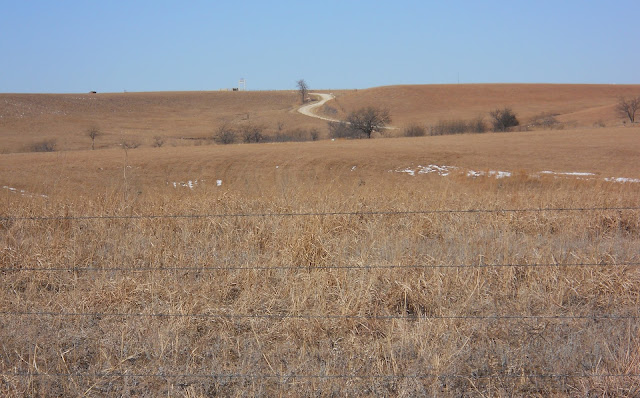 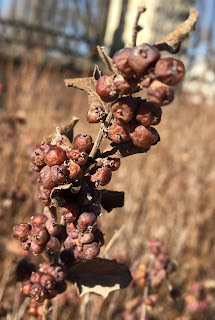 Last week, when the weather teased me with warm sunshine and clear air, I strolled during lunch to the K-State Gardens, seeking signs of Spring.  I wanted only a brief glimpse of a timid peony breaking through the ground, or the slightest sight of  a subterranean squill squeezing through the frozen crust.  My desires, like a foundering ship against the shore, dashed by the dry remnants of dead perennials, the only bright spot, Bittersweet, both in name and in spirit, as pictured above.  Russet sumac berries failed to break the brown monotony and puce coralberries merely blended into the bleakness.  I left, back to work in walled confines, to wait further, sullen and sad.

Thank God, in such moments, for Bittersweet and Fake Blogs.
Posted by ProfessorRoush at 1:08 PM No comments: 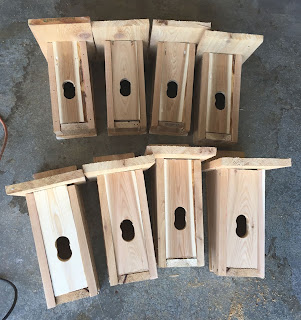 ProfessorRoush took advantage of a mid-January warm spell yesterday to put out and mount the new bluebird houses that I made after my "check-and-clean-the-nests" weekend in November.  I haven't blogged about it, but I needed to replace several older bluebird houses after my inspection and I went a little crazier than normal and had made eight new bluebird houses (per the Roush NABS-approved plans) in a single 3-hour span on the weekend of  Thanksgiving.  And yesterday, knowing that Eastern Bluebirds normally start looking for suitable nest lodgings in February in this area, I thought I'd better be getting the new birdhouses up for the early arrivals while the weather was nice. 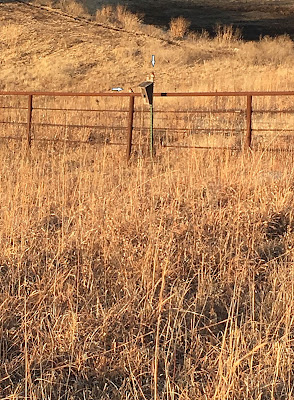 I found, however, that the bluebirds are already back (if in fact they ever left) and they were thumbing their noses at the new houses, in effect saying to me, "we don't need no new stinking houses!"  On my back hill, I ran into this pair (which I have denoted by arrows if you click on the photo or look closely), clustering around one of my older, more run-down houses, and I was most delighted to see them.  As I took this single photo from a distance, they decided I was close enough and they flew away, ahead of me, to the next house on the fence line, so I'm quite sure they've been checking out the neighborhood and already have a good idea of property values and proximity to water and food sources.  This Mrs. Bluebird seems to be pretty happy with the home that her male picked out.  Maybe "new" isn't as appealing to bluebirds as weather-beaten and old?  Maybe they don't like the smell of new cedar?  There's no accounting for taste, especially when it comes to the nest-warmer of the couple.

I continued to place out new houses and reposition some older houses on my walk.  I have probably overbuilt the neighborhood, since bluebird pairs don't like to nest within sight of others, but I want every azure visitor to my 20 acres to have a home, even if some end up being homes for wrens.  At least the carefully-sized entrances seem to keep the ubiquitous sparrows out. 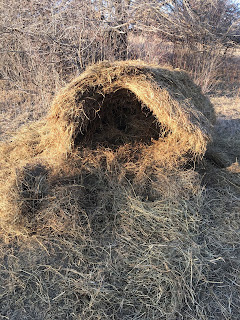 While traipsing around the bottoms, I also needed to check on the donkeys, who hadn't been seen in several very cold days, and I found them to be fine.  I was amused that this hay bale, deposited in the bottom for their eating convenience and for better nutrition than the dry prairie grass, seems to be hollowed out, the better preserved grass on the inside eaten first.  Who would have thought that donkeys, as well as bluebirds, could be so particular about their homes and food?  Certainly not their gardening landlord.

Posted by ProfessorRoush at 11:38 AM No comments: