On the Bluebird Trail 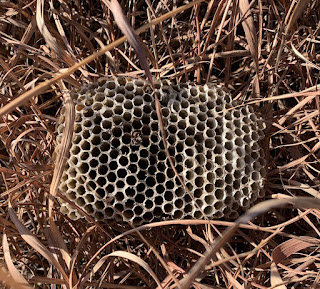 As the temperature reached 55ºF early today, on its way to a high of 64ºF at 3:21 p.m., I was easily coaxed into the garden under the bright sun for puttering and the more puttering.  My gardening readers may be ringing your calloused hands over climate change, but if my 64ºF day is evidence of climate change, then I'm happy with it.   As you recall, Garden, my main goal for the beautiful day was to clean out the bluebird boxes, in preparation for another bluebird nesting season. 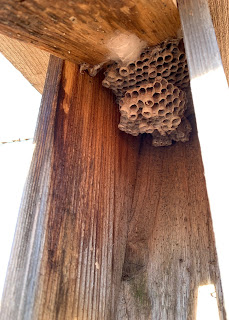 I've posted before about my bluebird trail and my own NABS-approved bluebird box, so you know already that this is one of my gardening focuses for normative ecology and species survival.  What I haven't pointed out before is that one of the reasons you MUST clean out these boxes annually is to eliminate paper wasp nests from the boxes.  Wasps and bluebirds don't get along.  You can't just swipe out the remnants of the nest, you have to look high into the boxes (photo at right) and remove any wasp nests.  In 22 bird boxes, there was evidence of 11 bluebird nests.  That doesn't sound too spiffy, but I have a number of old boxes in areas where I don't expect bluebirds to nest (near the woods).  There were 6 other boxes filled with nests and 5 empty ones.  All the empty ones had enormous wasp nests and about half of the bluebird nesting boxes did as well. 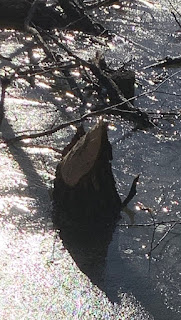 It was a great day to be out and to increase my Vitamin D production, but my happiest surprise of the day was the discovery of some beaver activity in the pond.  Not a huge number of chewed trees, but one substantial one around 8 inches in diameter (photo at left), and a few other smaller saplings in the process of removal (photo below). It's been about 15 years since the last beaver lived in the pond and I think the late fall rains brought them upstream into wetter-than-previous areas.  If this one stays or brings his family next year, I'm all for them clearing the pond of all the willows that have sprung up on the shoreline in the past decade. 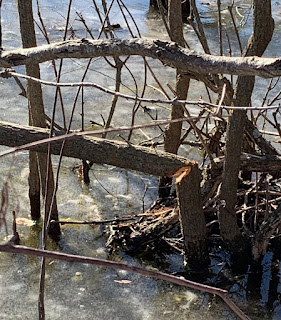 After my bluebird-inspired hike, I puttered away a number of small chores that need to be done in preparation for spring.  A large orange pot, evidently not-frost proof, had disintegrated and needed to be trashed.  A little barbed wire needed to be re-stretched.  Some apple tree rootstock sprouts had to be pruned away.  A few unsightly, dead petunias needed to be ripped up and thrown on the compost pile.  All in all a great January day with February weather.  Here's to hoping we are planting peas early this year!
Posted by ProfessorRoush at 11:09 AM 4 comments: