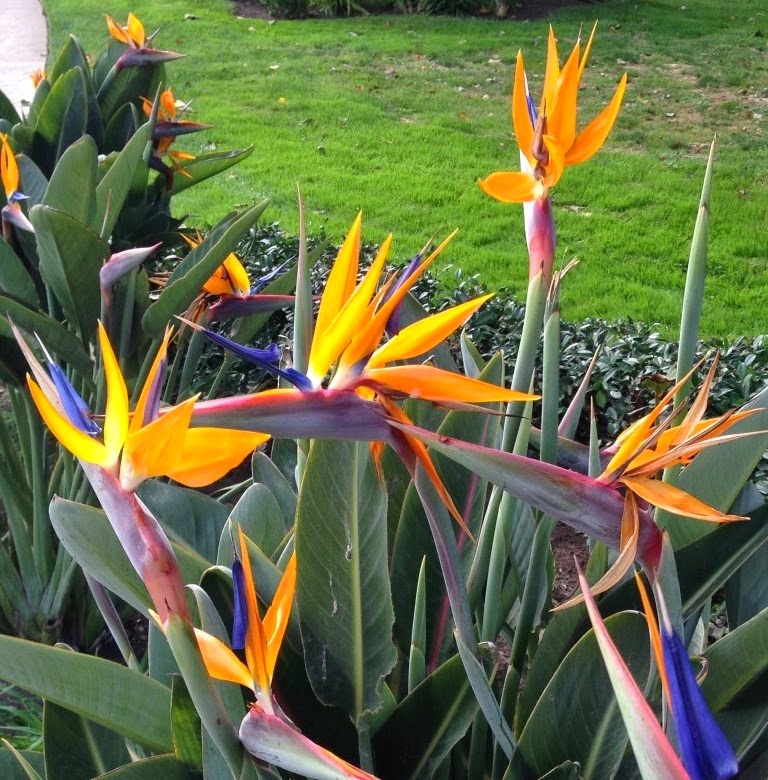 ProfessorRoush took another long hiatus from blogging again this past week, but at least this time, I had a good reason (or think I had a good reason).  My annual ACVS (American College of Veterinary Surgeons) convention was in San Diego, so Mrs. ProfessorRoush accompanied me to that desert paradise and pretended that she was on a "San Diego Housewives" reality show for a few days.  We ate ourselves into discomfort and celebrated our 32nd wedding anniversary while there. 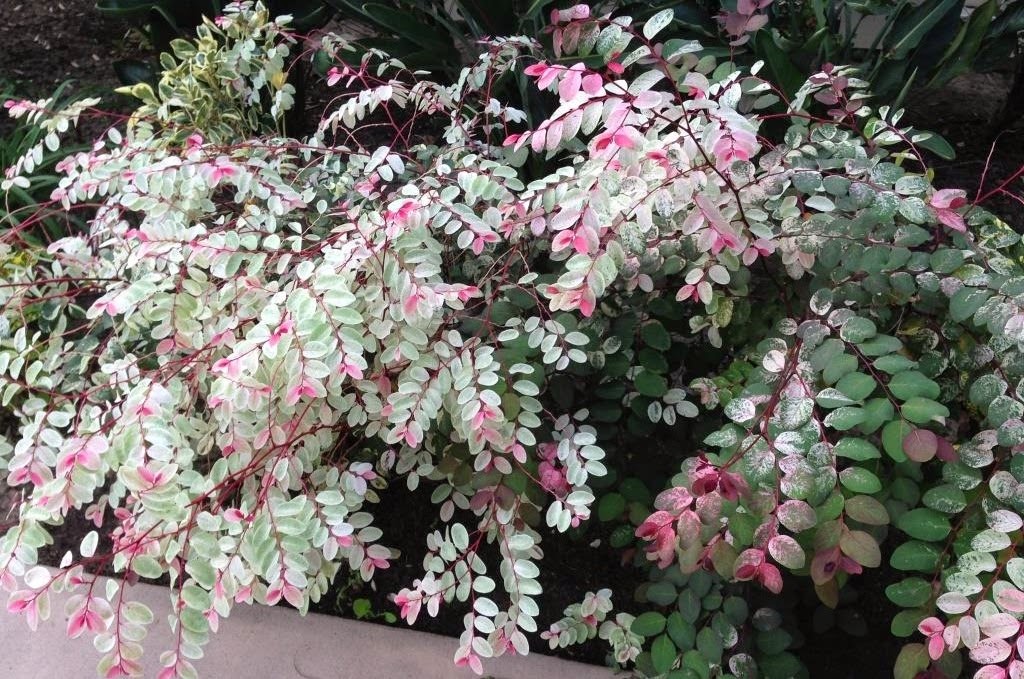 When Mrs. ProfessorRoush drags me to interesting and educational sights on such trips (such as the beach and the Old Coronado Hotel, I make every effort to listen with one ear and nod while I'm actually concentrating on the different climate and vegetation.  Often, I can't identify a "other-zonal" plant at all, as exemplified by the specimen at left.  I haven't a clue what this is, but I really hope that it will thrive in Kansas because if I ever see it, I'm going to grow it in my garden. 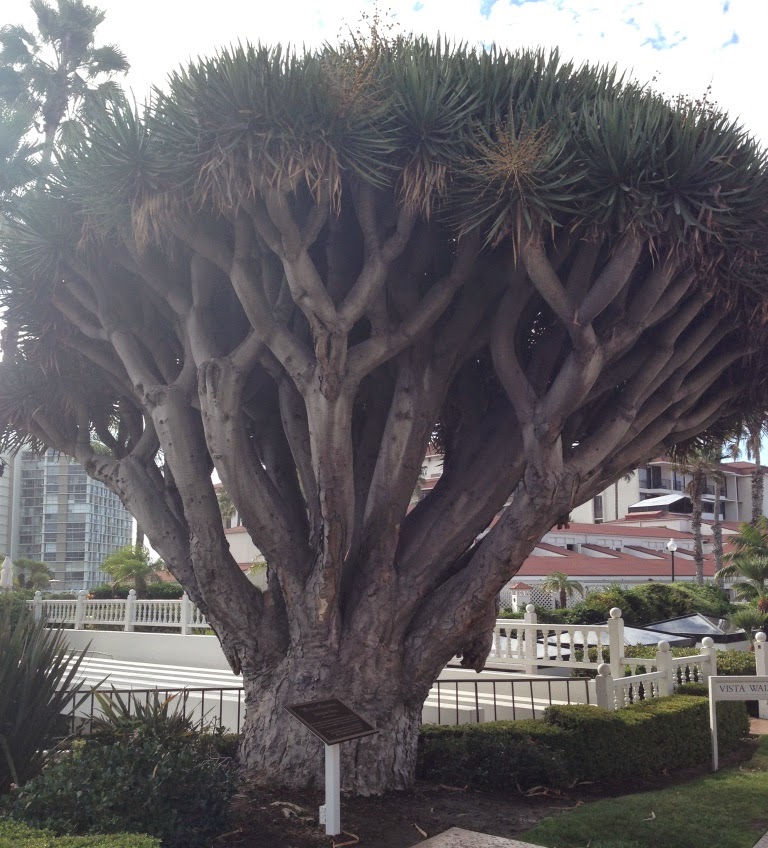 I frequently learn about new plants during these trips.   For example, the plant at left is a Dragon Tree (Dracaena Draco), a member of the asparagus family, which lives at the Hotel del Coronado on Coronado Island.  The plaque at its feet notes that the Dragon Tree at this Hotel was used in a backdrop in the 1958 Marilyn Monroe movie Some Like It Hot, so I spent some time imaging the eternal beauty of Ms. Monroe standing next to me under its shade.  Sadly, before I could take that fantasy very far, Mrs. ProfessorRoush dragged me away all too soon to see the stupid Pacific Ocean and the barren beach along it. 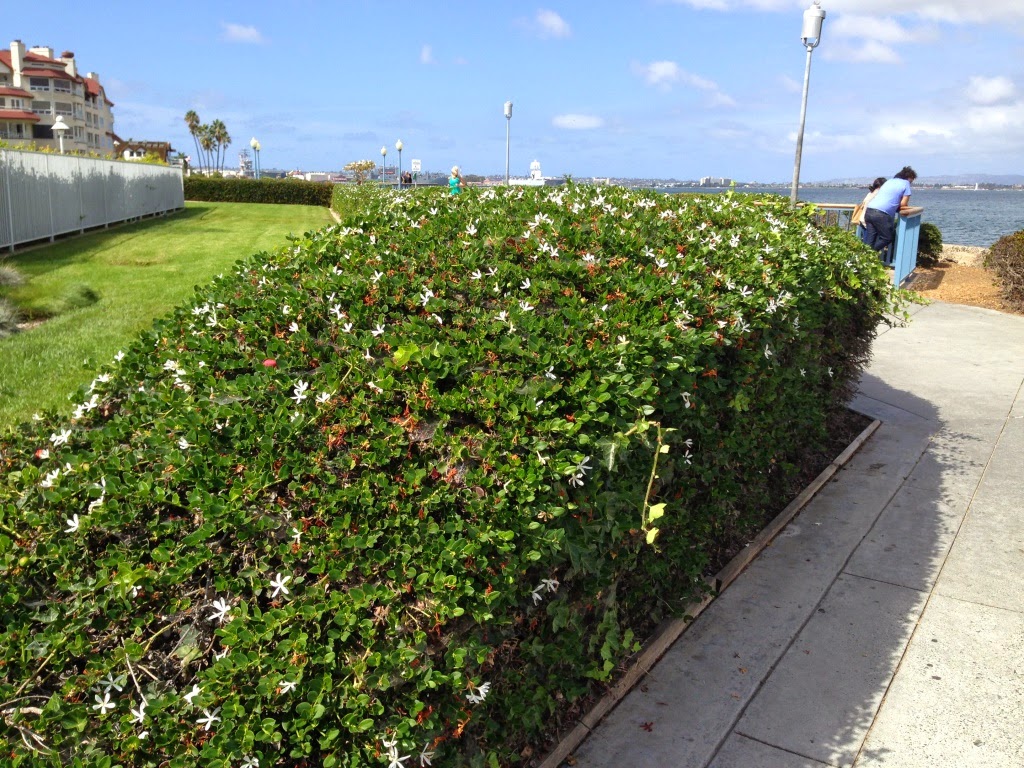 I wasn't surprised at all to see the orange Birds of Paradise (Strelitzia reginae) above, and I was able to recognize the long jasmine hedge at the left and spend some dreamy moments thinking about its fragrance in full bloom.  I was also pleased to learn that 'Fire Power' Nandina looks just as bad in Southern California there as it does in my own garden. 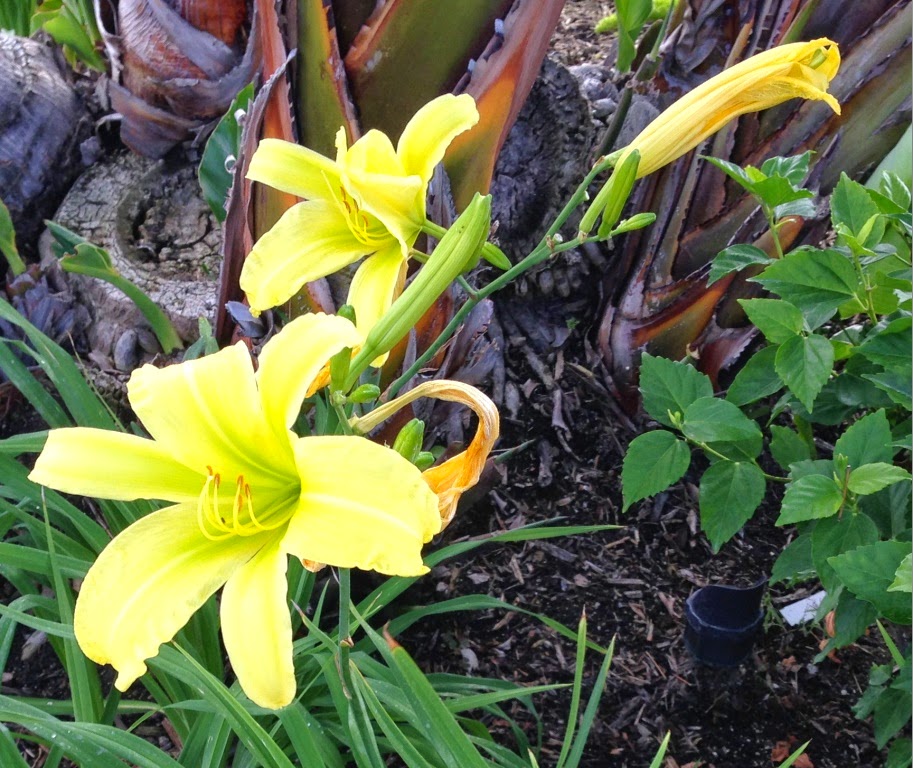 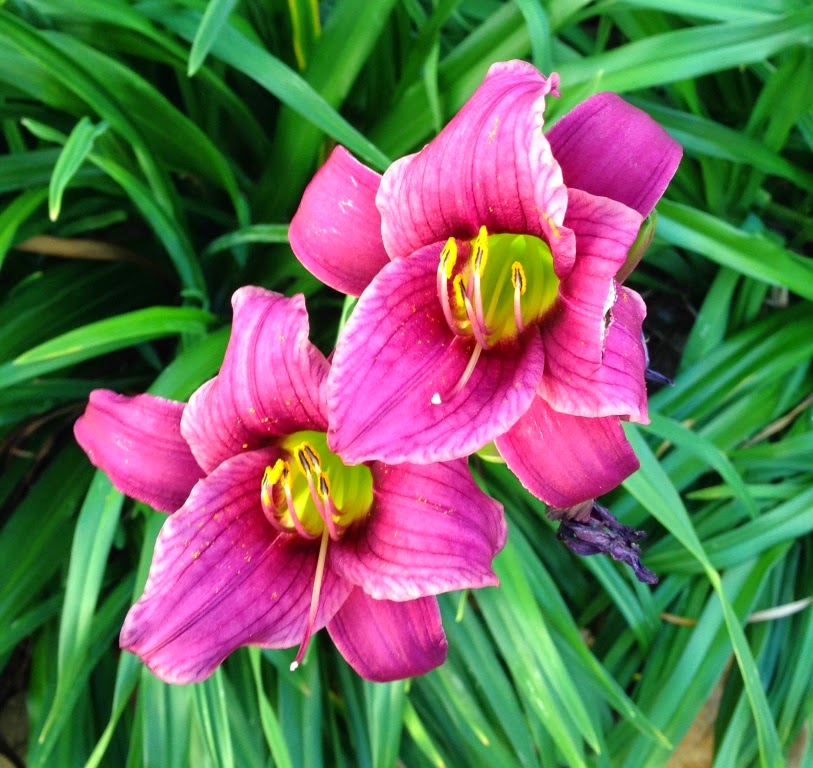 All in all, a great trip, good lodging, good eats, good company, and good weather.  San Diego is a great place to visit, but I wouldn't want to grow daylilies there.

Posted by ProfessorRoush at 6:21 PM 5 comments:

Friends, I generally strive to not be a braggart bore.  That is usually an easily-reached goal, because gardening in the Flint Hills doesn't allow me many opportunities for successful outcomes to brag about.  But I must, I simply must, take this opportunity to show you my $1000 strawberry patch. 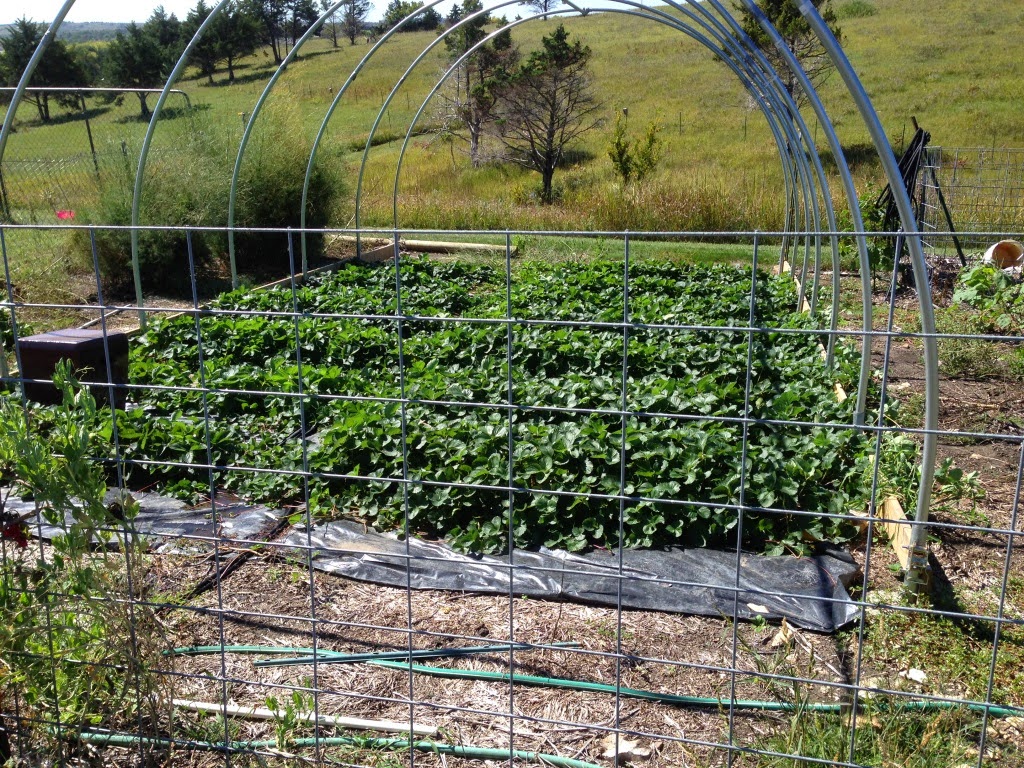 Frequent readers are fully aware of my belief that on the seventh day, just before resting, God created strawberries to be the evolutionary apex of fruity perfection.  You also know that this past Spring, tired of my inability to oversummer and overwinter a decent stand of mature strawberry plants, I purchased and installed a 14'X24' shade house, as previously blogged, to protect my delicate young plants from the searing rays of the July and August Kansas sun.  I placed black plastic between rows at planting and laid down soaker hoses for watering.  Over the summer, I watered it about once a week, implanted the runners back into the rows, weeded incessantly and protected my pretties from man, insect, and beast. 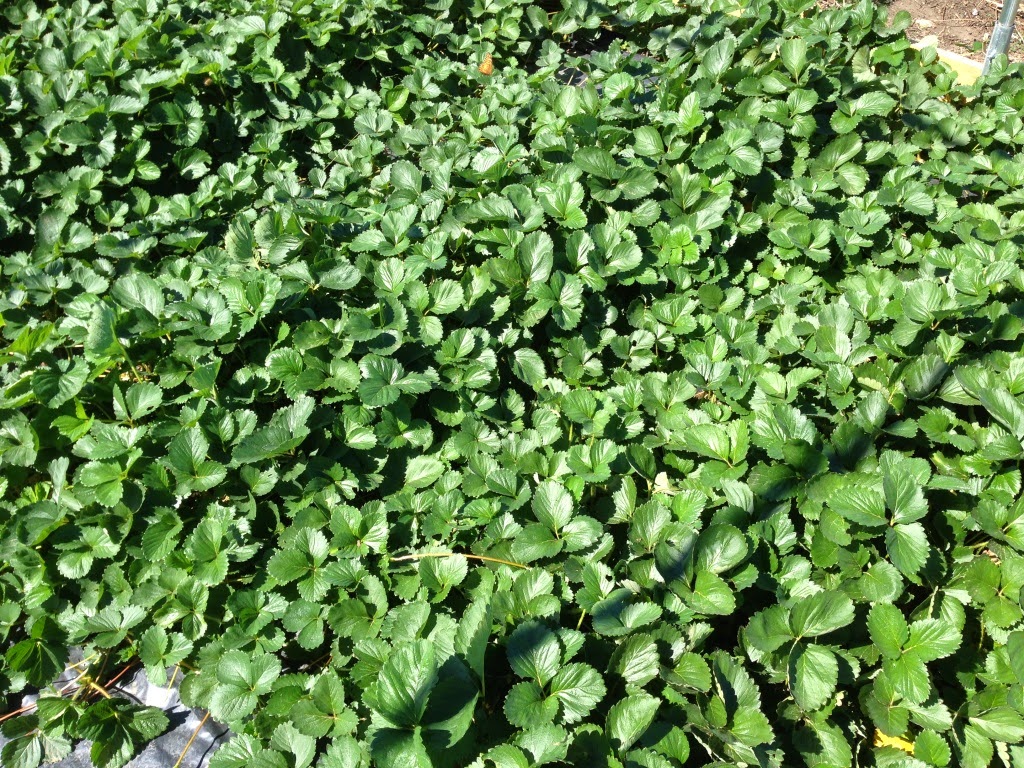 The result of all that money and labor is shown here.  Even in the grower's Eden of my boyhood Indiana, I've never seen a patch of strawberries with so much promise.  I recently removed the shade cloth and put it up for the winter, both to protect the cloth and to allow the strawberries a little more October sunshine.   There are four varieties planted here, early and late, all June-bearers, laid out in rows that are two feet wide and two feet apart.  I would note that 'Earliglo' was the most vigorous, followed by 'Surecrop', 'Jewel', and 'Sparkle'. Now I get to spend all winter salivating over the promise of the red sweetness that will be mine next spring.
I will, of course, also be worried all winter that I've jinxed myself by merely writing this bragging blog.  I'll cover them with straw in a month and pray to the Winter God that he doesn't make it too cold in January.  I'm going to leave the cover off until near harvest next year, and then I will place it on at the last moment so that I can savor the ripe strawberries in the shade (and perhaps keep the birds scared away).   If you need me next June, either day or night, look for me lounging peacefully amidst the colors and scents of heaven, stuffed to the gills with bursting red fruit.  I hope.

Posted by ProfessorRoush at 7:00 AM No comments: 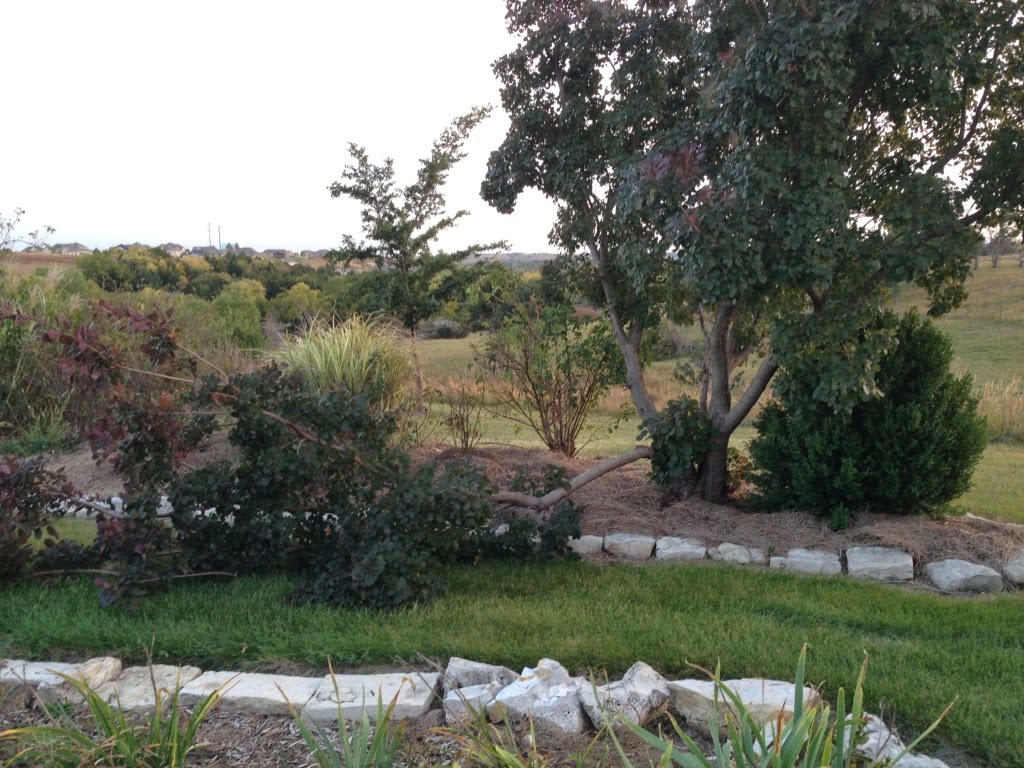 A week or so back, I was awakened at 2:00 a.m. by the rising wind outside my window and, seconds later, the patter of rain against the pane.  Knowing that we desperately needed the rain, I smiled, relaxed, and went promptly back to sleep. 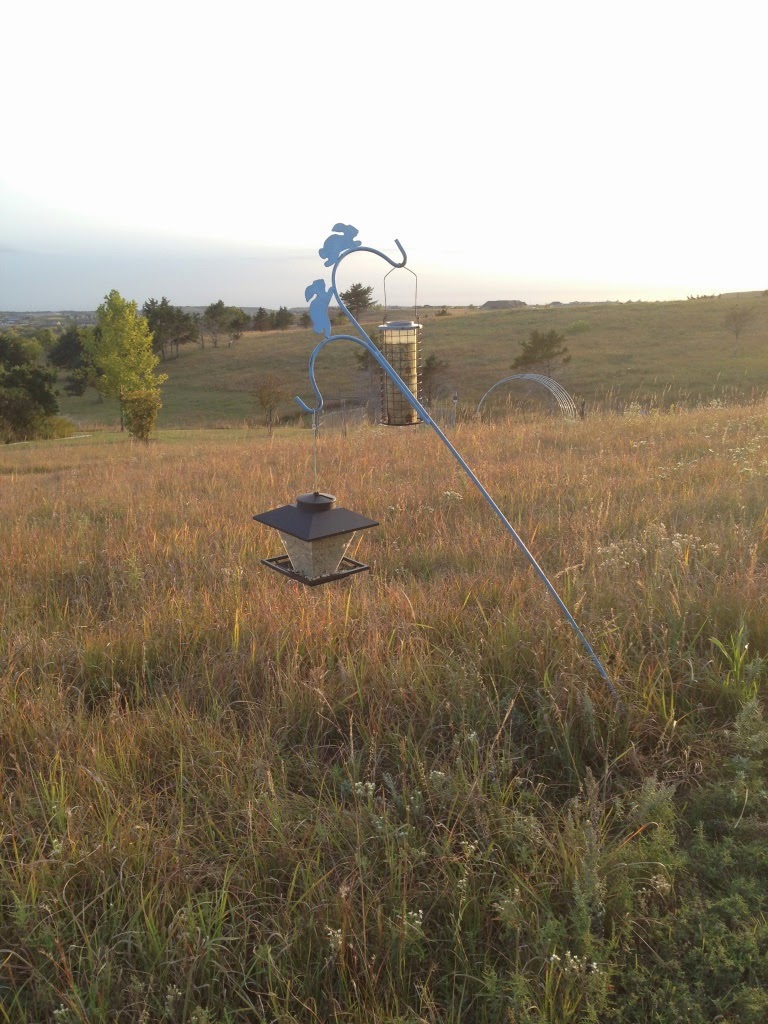 Okay, okay, that's an understatement at best, if not a complete misrepresentation of the incident.    If I am fully disclosing what happened, the wind suddenly began to howl, there was a thunderclap that sounded simultaneously with a lightning flash that seemed to strike right above the bedroom ceiling, and I instantaneously levitated two feet off the bed and vertically onto the floor.   The rain began to pour like the Second Flood, and the nearby lightning and thunder continued for two hours while I lay awake and fretted that the house would explode into flame at the next bolt.  We haven't seen a lightning storm like that in years. 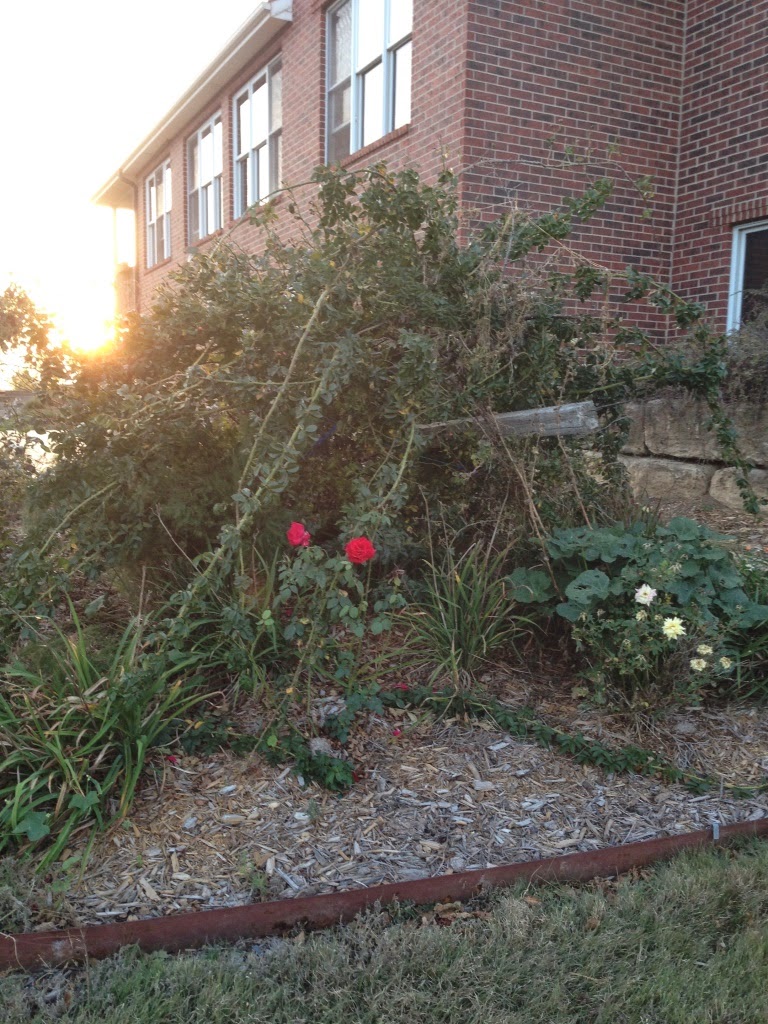 There were no  storm warnings on the TV or radio or Internet for our area, and so I didn't think much more about it (except to be happy about the 1.9" rain) until I got into the garden this weekend.  There, I saw the true nature of what must have been a straight line gale or downburst during the storm.  My Purple Martin houses were leaning and the bird feeders were askew (picture above, left).  I also lost a portion of a trunk off the Smoke Tree as illustrated (at the top, right).  Worst of all, the wooden post that held up my 'American Pillar' rose snapped off at the base (photo at right).  Replacing it will be a difficult and painful task due to the nature of the prickles on this rose, so keep me in your prayers. 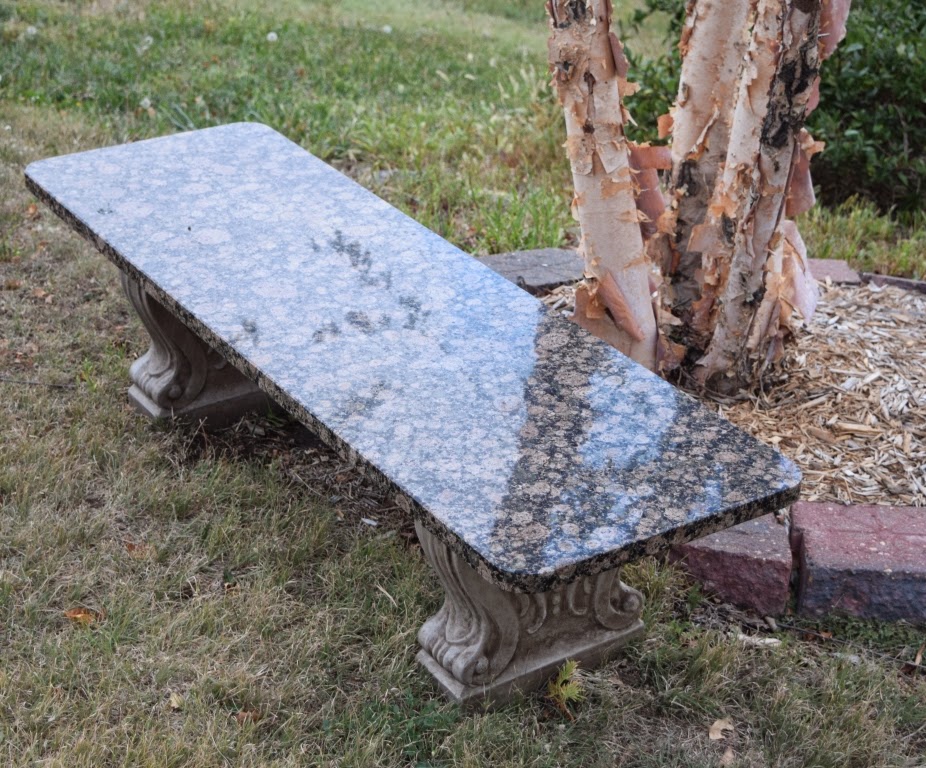 On the bright side, I recently salvaged a piece of Baltic Brown granite from our kitchen island during a remodeling of the kitchen and I made it into a wind-proof garden bench which, despite its unprotected placement to the north side of the house, stood up well to the worst the storm threw at it.  I think it provides a really nice formal touch to this area.  The new bench also proves once again that gardening in Kansas is often a simple matter of over-engineering and weighty solutions.  So now all I have to do is apply that knowledge and create a cement post for the 'American Pillar' rose, anchored down about forty feet into the bedrock.   That shouldn't be too hard, should it? 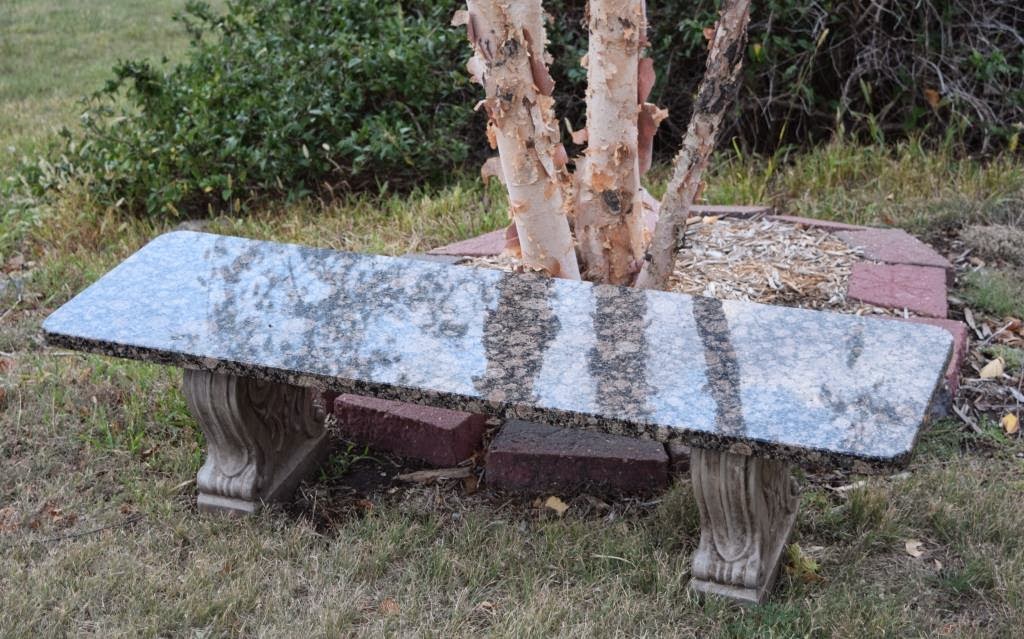 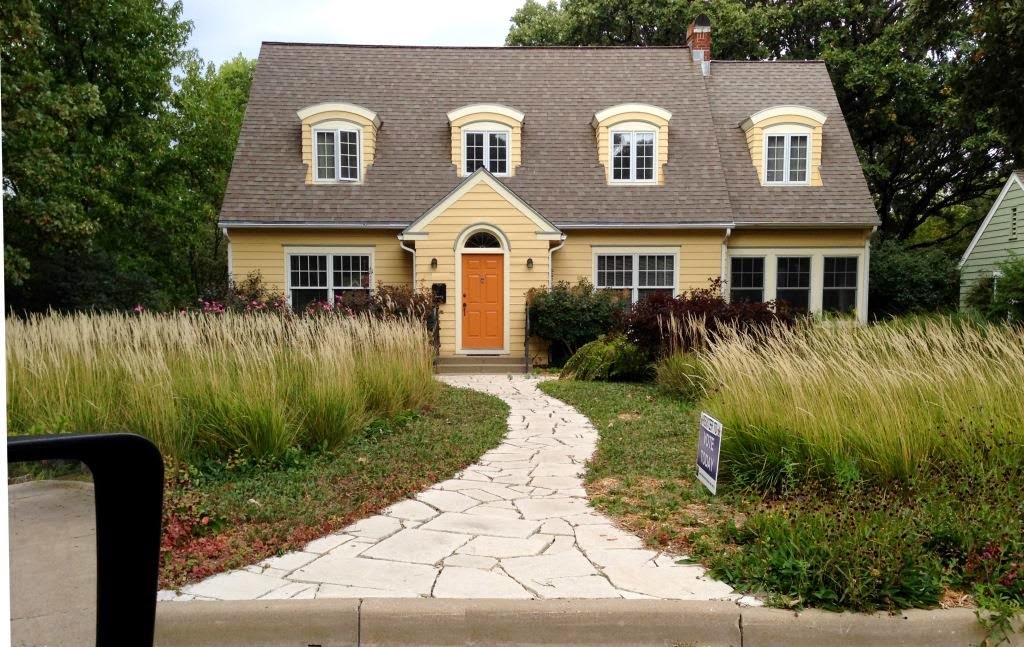 I came across this house on a random trip around town while driving down a street that I may not ever have seen before.  Finding it is a testament to a friend's practice of purposely driving unusual routes from point A to point B on occasions when you're not in a hurry.  I was with the aforementioned friend and we took a detour for him to show me a small hidden park in Manhattan.   This house was a WBC (wow!-brake!-camera!) event; defined by a moment when you are stunned by a garden while driving, suddenly slam on the brakes, and take a photo out the window to document the vision of the gardener.

Here is everything we've been talking about in natural landscape;  a smaller, less-carbon-footprint house, a front yard of ornamental grass that needs mowing only once a year (composed primarily of what I think is Calamagrostis 'Karl Foerster'), and a few native perennials to brighten up the edges (notice the remnants of the Black-eyed Susans to the lower right).  It seems to be right out of the recommendations of influential texts such as Sara Stein's Noah's Garden.   I didn't go creeping around the house, but there is likely only a very small back yard surrounded by some woody areas.  I took this photo knowing I'd blog about it, all the while hoping that the owner wasn't calling the police about the stalkers taking pictures from the road.  I disguised the location by eliminating the house number from the picture, so I hope the owner doesn't mind the anonymous publicity.  They'll get a visit soon enough, however, from the Garden Tour group with an eye towards being a host site of a future Tour.

I love this landscaping and this house (particularly since our empty-nest home seems suddenly too large), but I also know that I can't do this on the Flint Hills prairie that I live on.  This house is relatively safe in town, surrounded by miles of paved crossing roads, but imagine this yard and house out on the Kansas prairie (or in Southern California) with a grass fire moving towards it.  Yikes!
Posted by ProfessorRoush at 12:53 PM 10 comments: