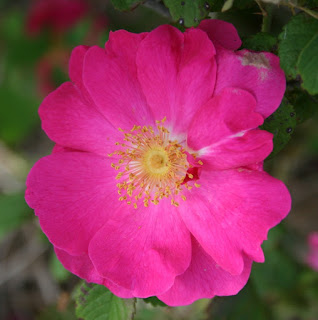 That rose is 'Duchess of Portland', a Damask Perpetual that was known prior to 1775 and who gave birth to an entire rose class named after her. This reported hybrid of 'Quatre Saisons' and Rosa gallica officianalis is one of the few reblooming roses  grown in the Western Hemisphere before the China roses and their hybrids took Europe by storm.  Perhaps because of her ancient heritage, 'Duchess of Portland' can be found under many different names, including Portlandica, The Portland Rose, Rosa Paestana,  Rosa damascena portlandica bifera, and Scarlet Four Seasons' Rose.  There was some suspicion that she DID have some 'Slaters Crimson China' in her background, but Internet sources say that any China heritage was disproven through DNA analysis at Claude Bernard University in France. 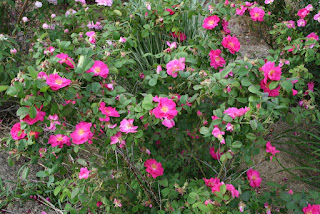 'Duchess of Portland' has semi-double blooms (10-16 petals) with a diameter of 4 inches in my 6A climate.  Four inches might not seem like a large bloom size compared to a Hybrid Tea like 'Peace', but the flat shape and the small number of petals puts this rose in a class with 'Altissimo' for standing out in the garden.  There is a strong sweet fragrance to reward any nose that dares to part the golden stamens.  It is also her lipstick-bright pink color that sets this rose apart, almost scalding your eyes if you look at it too long.  Officially, this color is labeled as "red", in the same way that many Old Garden Roses that were really fuchia or pink were labelled  "red", because that was the best red tone in roses available in former centuries.   Personally, I think it is time to stop calling these roses "red."  They're pink, okay, can we just agree to call them that?  I've had two bloom flushes already this summer, with a few sporadic blooms in-between, and I hope yet to see another flush as cooler weather returns in the fall.  The bush is round in form, extending about 3 feet in all directions, very healthy and drought-resistant, and she sets a few orange hips as the season ends.

Some roses just have more history than others, and 'Duchess of Portland' is one of the former group with history to spare.  She is the mother of the entire group of Portland roses, which once numbered in the hundreds but has dwindled to 15-20 commercial varieties.  The origin of the name was from a namesake Duchess of Portland who was a plant collector around 1780.  And yes, she may be old, but she's still very much worth adding to your garden.  Just don't expect her to hide among other roses, because she was bred to stand out.