It is not often that I get to combine the job that earns my living (veterinary medicine) with my interest that consumes the excess cash (gardening), but I happened on a connection recently in a post on Gardenweb.com.  That post was from someone who had been told and who believed that their dog had been poisoned by eating compost. 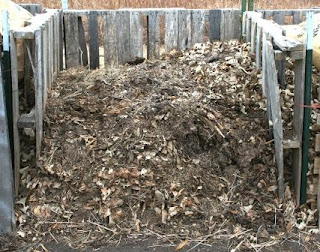 I was a little chagrined to hear about this toxicity in a random post on the Internet, but I'll be the first to admit that my general veterinary education lies far in the past and, as a surgeon, I haven't followed advancements in veterinary toxicology for the past 25 years.  I felt a little better when I found my internist colleagues were also unaware of it.  A little quick research tells me that, indeed, there have been some reports of dogs eating compost and suffering toxic effects, even though some of those reports are undoubtedly of  "garbage gut," or diet-induced gastroenteritis, cases rather than actual toxic effects. Compost toxicity is, however, listed as such on the petpoisonhelpline.com website.

Knowledge is power, so I'll repeat here what I've found. Toxic effects from compost are variably suggested to be due to mycotoxins (toxins produced by fungal organisms), or to clostridial toxins (bacteria that may grow when meat or dairy products have been added to the compost).  Meat, eggs, and dairy products, of course, have no place in your compost pile anyway.  To me, that means that most of the compost I produce from leaves and grass, particularly if aerated properly, should be safe if one of the bonehead Labradors owned by my neighbor accidentally gets into it.

Symptoms of poisoning could include agitation, increased temperature, panting, drooling, and vomiting, and severe cases could progress to incoordination, tremors, and seizures. Since many dogs I encounter pant and drool incessantly, those aren't very helpful unless other symptoms are present. There is no specific antidote.  Inducing vomiting or gastric lavage in cases of known ingestion should help decrease toxicity.  Supportive care such as procedures to decrease body temperature, IV fluids, and anti-seizure medications may be necessary in severe cases.

For prevention, toxicologists suggest that in concert with eliminating the use of meat and dairy products in your compost, the pile should be fenced off from pets and wildlife.  My personal compost pile does sit within the electric fence that protects my vegetable garden, but I'm under no illusions that it will keep out my Brittany Spaniel, who has been known to chase rabbits through the fence more than once, let alone the neighbor's dogs who don't seem to have enough total neurons to spare any for pain perception.  And what do I (or we collectively) do about the compost that we heap annually around every old rose in our gardens?

I remain a little bit skeptical, knowing by education that the gastrointestinal system of dogs is designed for them to consume a vast array of foods that would cause a billy goat to puke, and knowing by experience that they seem to suffer little ill effects from eating delicacies that range from ancient dead rabbits to raw soil and on to cow poop. Compost toxicity in dogs probably has occurred rarely, but it also ranks with those normal unavoidable risks that occur in life, like drinking from a garden hose or touching undisinfected shopping carts, both of which seem to be freaking out the general population these days. I wouldn't rush my dog, however, to a veterinarian for a quick stomach pump just because I saw it digging in the compost pile for a vole.

In a similar vein, it did concern me a little during my research to find that a gardener in England had died from aspergillosis (a respiratory fungal infection) started by exposure in his compost pile, but I'm also not about to start wearing a face mask (as suggested in the article) when I turn my compost.  What would the neighbors think?  Somewhere the fear has to be contained by reason.
Posted by ProfessorRoush at 7:00 AM