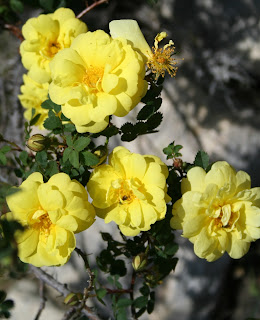 If I were to choose a rose that I believe exemplifies the spirit of the prairie, it would be the drought-tolerant, thorny, scraggly mass that is 'Harison's Yellow'.  Harison's Yellow, an early season bloomer, always serves to remind me that the brightest days of Spring and Summer are yet to come.

This has long been one of my favorite roses but I'm convinced that my fondness for it is entirely due to the cheery bright yellow color in the early Spring.  Ever the optimist, I tend to gravitate towards interaction with, and enjoyment of, plants and people that will keep my day on a cheerful note, whether it is watching the perky Robin Meade on the Morning Express of Headline News ("Good Morning, Sunshine!") or picking the next perennial to go into my garden.  As a consequence, I shy away from the trendy "black" and chocolate flowers that the designers rave about and instead I choose bright colors.  My garden tends to be on the flamboyant side at times, at least among the roses.  Harison's Yellow is just such a cheery yellow that I can't help but feel lighter at the sight of it. 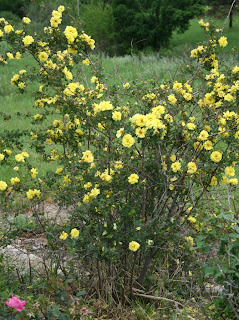 Of course, Harison's Yellow (R. spinosissima X R. foetida 'Harison's Yellow') has other positive attributes that make it one of the few roses I grow in multiples.  The dark green foliage provides a great contrast to the vibrant semidouble yellow blooms, and I believe the small leaflets, delicate in appearance, give this rose a bit more drought-tolerance than the average Rosa.  It is also, unusual for a yellow rose, highly resistant to fungal disease and I never spray this rose for blackspot or insects.  Don't get me wrong, it does get blacksport, but it rarely proceeds to affect the plant significantly.  And hardy?  Harison's Yellow is stone-cold temperature-hardy into Canada.  This is a rose that laughs at the worst of my Zone 5 winters and shrugs off late freezes and frosts.  It grows about 6 feet tall in my climate, and, due to it's suckering habit, can be as wide as I let it range.  It is a once-bloomer, but that is not something I count among the deficiencies of this rose, for its beauty is all the more cherished by me for its fleeting nature.

All great beauties have their drawbacks though and Harison's Yellow is no exception.  This is an exceptionally thorny rose;  not with great gouging thorns like 'Chrysler Imperial', but with more delicate, sharper and more numerous thorns that pierce you every which way from Sunday.  It has tall gangly canes that have a delightful brown tone, but tend to sprawl in a mass.  It also suckers and spreads like there is no tomorrow on the prairie.  This is a rose to use as a barrier for human marauders or livestock, reportedly one of its original uses on the prairie. A final regret, however, is the musky scent carried in the blossom. Harison's Yellow has a history clouded by various myths of origin, but undoubtedly this rose is a cross from Rosa foetida 'Persian Yellow', because it carries the bright color and rotten scent of the latter parent in every bloom.  From several feet away, I tend to like the aroma surrounding Harison's Yellow, but not when my nose is buried in an individual bloom.

Part of the allure of Old Garden Roses as a group is the history surrounding the roses, and there are many stories surrounding Harison's Yellow.  Its introduction ranges anywhere from 1824 through 1842 in various sources, but all seem to relate its origin point as being in New York during that period.  The most common story, unverified and under debate, is that it first bloomed in the garden of attorney George F. Harison on 32nd Street and 8th Avenue and was introduced by nurseryman William Price in 1830.  It is also known as the Oregon Trail Rose and the Yellow Rose of Texas and seems to have followed the pioneers across the United States, leaving pieces of itself at every homestead. I always hold a picture in my mind of a heart-worn pioneer woman bringing Harison's Yellow along in the wagon as a reminder of home.  Rosarians should keep in mind though, that the famous song "The Yellow Rose of Texas" refers to Emily D. West (aka Emily Morgan), a woman who reportedly aided the Texans during the Battle of San Jacinta with her ability to keep Santa Anna preoccupied in her boudoir.  Lovely flowers, it seems, come in all forms and were helpful to the struggling American pioneers in many different ways.

Posted by ProfessorRoush at 10:47 AM