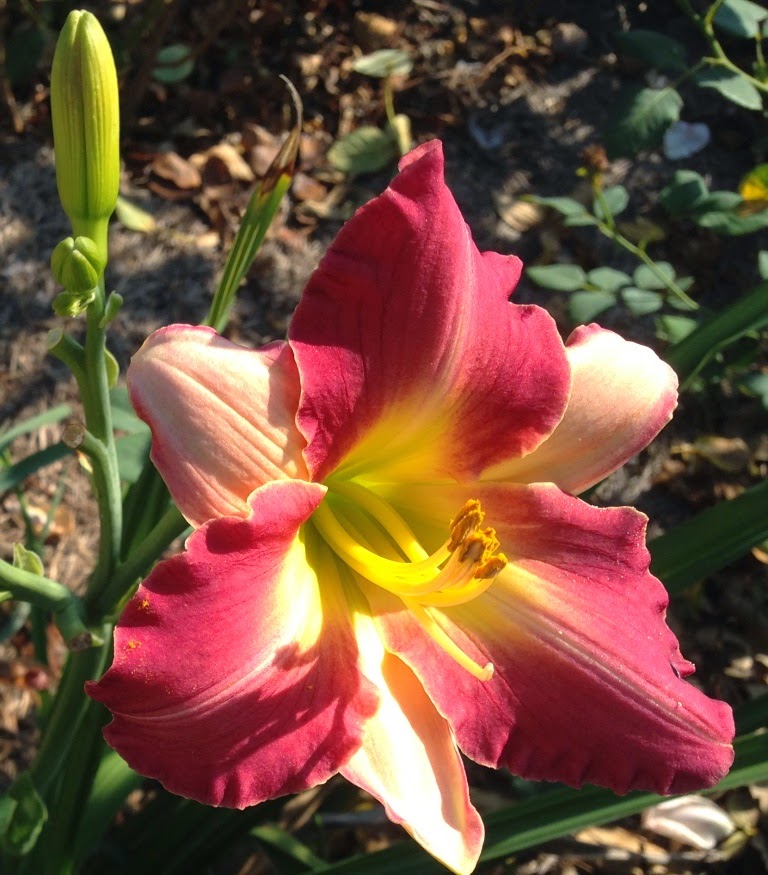 I know that this non-posting spell has been my longest in quite some time, but I didn't know that I had disappeared long enough for it to be daylily season again.  What, it's merely 18 days since my last post?  Then this daylily, Hemerocallis 'String Music', is deeply confused, because it is blooming nicely here in late September, over a month since the last daylily ('Final Touch') of my season.

'Final Touch' bloomed at a normal time for that cultivar.  'String Music' is a bi-tone diploid hybridized in 1996 by Niswonger, and according to every source I can find, it is supposed to be an early midseason bloomer.   Translation:  'String Music' should have bloomed in early July here.  It's parents, 'Cisty' and 'Southern Charmer', are midseason-late and midseason bloomers respectively.  Ma and Pa Daylily are likely quite disappointed at their tardy offspring.

I, however, am not disappointed at all.  I'm pleased at the unexpected but stunning gift of a daylily blooming this late in the season (I'm purposely not considering, of course, the ugly and ubiquitous 'Stella de Oro' as worthy of notice, even though it still occasionally blooms).  I'm also impressed by the vibrant colors of 'String Music' on these almost-Fall days.  In her normal cycle, in July, the scorching temps and blazing sun bleach her out to a boring light pink.  Now, blessed by the cooler mornings, her perky colors drew my attention from across the garden, a "what the heck is that?" moment of excitement bestowed on a fading garden.

To be completely truthful, I should add that I did experience one disappointment on the same trip outside that presented 'String Music' to my heartstrings.  Our now not-quite-so-small dog Bella failed to alert me to the presence of this adolescent Great Plains Rat Snake (Pantherophis emoryi) laying in the crease of the 1st and second steps out the front door.   What use is a dog, if not to alert one to such imminent disaster.   I stepped right over this foot-long snake on my way to take Bella out to play, and only saw it upon turning around to see if the door had shut properly.  All in all, it seemed much to late to scream and jump up in the air, so I calmly recorded the incident on my phone to show Mrs. ProfessorRoush how badly her little precious had erred.

Posted by ProfessorRoush at 6:39 PM