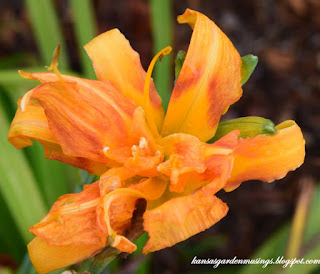 Oh, no.  We're not leaving orange daylilies behind us without discussing that most classic of "ditch lilies," Hemerocallis fulva 'Kwanso'.  Here it comes, just when you thought it was safe to reenter the garden.

For most of my gardening life, I have enjoyed 'Kwanso' and defended it against all detractors, foreign or domestic.  It was one of the first daylilies I grew, and, as you already know, is tough and hardy and difficult to kill.  It's also colorful and fragrant as all get out.  In short, it would seem to be the perfect daylily for a beginner gardener.

﻿
﻿
Unfortunately after years of mutual enjoyment, my 'Kwanso' has become a thug.  I'm aware that the term "thug" has recently become politically incorrect, but I know of no better descriptive term for its behavior.   It's the same old story; you nurture and pamper one of your children and then it enters puberty and runs amok with newfound freedom.

I first noticed that 'Kwanso' had become a problem last year when I recognized a thicket of healthy, tall daylily fans was starting to strangle the vigor out of my 'Fantin Latour' rose.  Acting in what I thought was a perceptively preemptive fashion, this Spring I pulled up many of the individual crowns and roots of 'Kwanso' in this area, applying herbicide to any stragglers in order to leave a single manageable clump in the area. 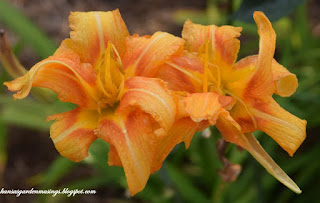 Little did I know, however, that the prescient promiscuous beast had already made a break for freedom.  Suddenly, these past few weeks, another overly-healthy daylily clump in a nearby bed revealed its true identity as it engulfed a more modest cousin (photo above).  I've now found three other clumps of H. fulva as they bloomed in different spots throughout the garden.  'Kwanso', unbeknownst to me, spreads aggressively by seed as well as by stolon, presumably with bird or rodent assistance.
﻿﻿﻿﻿﻿﻿﻿﻿﻿﻿﻿﻿﻿﻿
If you have these or similar forms in your garden ('Kwanso' is a double form of the species and there is another cultivar, 'Flore Pleno' with 18 petals), stand fairly forewarned and destroy them now!  To reach a proper prospective, I would recommend that you rewatch the 1958 classic film, The Blob, and picture me in the starring role so well portrayed by Steve McQueen (but younger and much more hip than Steve), trying to convince the unsuspecting townspeople that a crisis is at hand.  Because that is my goal now, to spread the truth far and wide.  If 'Kwanso' can survive Katrina's flooding, as reported, it has the potential to be an invasive weed at best, a complete monster at worst.

P.S.  I've seen reports that there may be a variegated form of 'Kwanso' available.  I'd be interested in hearing if it is less invasive or whether it reverts to nonvariegated easily.