'Hope for Humanity'.   If ever there was a rose named to increase sales to the WEE (wild-eyed environmentalists) and the Birkenstock herd, it is certainly 'Hope for Humanity'.  It's fortunate for the more cynical human personality types, including the many gardeners that prefer to spend time with plants rather than their fellow Homo sapiens, that 'Hope for Humanity' is also a healthy and beautiful rose so that we can claim we appreciate it for something other than its name.

'Hope for Humanity' is a 1995 introduction in the Parkland Series from Agriculture Canada that was released to celebrate the 100th anniversary of the Canadian Red Cross Society. Appropriately for that commemorative purpose, she is not the muddy magenta-red rose color that many "red" roses have, she's a deep vivid crimson red that makes the bush appear to be studded with enormous rubies.  The Red Cross had exclusive rights to market the rose until 1998 when it was released to sale by commercial outlets.  Like most of the Canadian releases, you will most often find 'Hope for Humanity' growing on its own roots, increasing the hardiness and survivability of the rose here in Kansas.  She blooms continually with those blood-red, fully double blooms held in trusses of 4-5 blossoms about 3 inches in diameter. 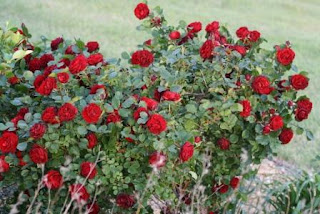 There seems to be a lot of recent interest in this rose on several gardening forums I frequent, particularly among the zone-poor gardeners like myself who are denied the less cold-tolerant rose families.  As I stated in an Internet posting recently, I constantly fight a bad case of zone-envy and regret that I can't grow tea roses or Noisettes, or camellias or gardenias outside of my house. And there's a lot of confusing information about 'Hope for Humanity', particularly in regards to height.  Agriculture Canada lists this rose as growing only 2 feet high, but numerous internet gardeners describe their specimens as being from 2 feet variably to 6 feet high.  Here in Zone 5B, my 'Hope for Humanity', about 6 years old at present, has never been cut back and is about 4 1/2 feet tall at present, with a half-dozen strong canes.  It is reportedly hardy to Zone 3 (it should be since it was developed at the Manitoba-based Morden Research Centre by Colicutt and Marshall) and I can confirm that I've seen no winter-dieback at all here in Zone 5. There's also some argument as to the repeat flowering of this rose, with sources listing it anywhere from 2-3 repeat cycles during the growing season to continuous flowering.  As I said, mine is continuous flowering from May through September and into October, rarely, if ever, without a bloom.  And it's a disease-free rose;  I never spray it and it gets only mild blackspot in the most humid weather.  It has survived wind storms, ice storms and the determined cane-gnawing by a family of rabbits in its short time with me.

If you're a suppressed Victorian who prefers hybrid-tea roses and is turned off by the shrub-like form and floribunda blooming of 'Hope for Humanity', another Canadian rose that might better fit your desires is the less sickly-sweet named, red hybrid-tea style 1967 introduction named 'Cuthbert Grant'.  The majority of internet sources list 'Cuthbert Grant' as another Parkland series rose, but the rose is named after the Métis explorer and leader.  'Cuthbert Grant', the rose, is a good hardy performer in my climate (also rated as hardy to Zone 3), of almost the same red color but perhaps a little more venous than arterial blood-toned in its particular red.  Growing a trifle taller to six feet and a bit faster, Cuthbert is also more suited to bringing into the house in a vase for display and has a better fragrance than HFH.

Luckily there's a rose for every fool, a fool for every rose, and still some 'Hope for Humanity.'
Posted by ProfessorRoush at 7:00 AM