When I considered the suggestion by horticulturist Kelly D. Norris to take pictures repeatedly of the same view in the garden (see my blog titled "Sometimes a Diversion"), I realized that I had presciently taken that advice, but only in regards to one or two specific places in my garden.  And "The Head" was one of those places that I haven't yet written about. 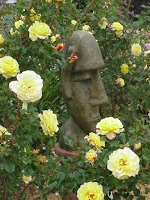 The Head, an Easter-Island-type statue I obtained from a local garden store, has been in my garden since the beginning.  It was the first statue of any size that I placed in the garden.  I keep the somber Head on a pedestal in the middle of two yellow 'Rugelda' rugosa hybrid roses, backed up by the white 'Marie Bugnet', and facing, of course, due east on the compass.   There it waits daily for the sunrise and stands watch for me to spread the alarm in case of the return of the Gods. 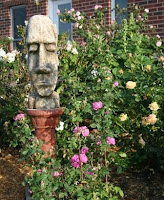 I'd always thought The Head provided a handsome conversation piece, flanked by the glory of the 'Rugelda' roses, but since I purchased it, it was always a point of ridicule for me from my loving wife, who despises it.  The last laugh was mine, though since the identical piece of concrete appears frequently on HGTV in the garden of Paul James, the Gardener Guy, forever muting my better half's questioning of my gardening tastes.  Anyway, when the 'Rugelda' fades, pink 'La Reine Victoria'  and blush white 'Comte de Chambord' are there to pick up the slack.

The Head is a good soldier, standing firm in the face of thunderstorms, prairie fires, and the ever-present Kansas wind (at least after I finally created a stable concrete foundation for it to keep it from slowly listing and falling off the pedastel).  It takes the harsh eastern sunrise on its face and the full burning Flint Hills non sun on its hatless skull without complaint.  And even when the ice comes down and glazes its features, it stands silent, immune to the world. 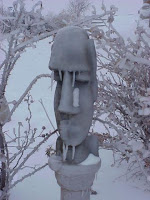 But I have seen The Head, in the depths of winter, weeping with me at the cold damage to the naked rose canes surrounding it and its poor perennial friends shivering in the show. The Head is always a good garden companion for the plants and for me alike. It doesn't talk to me though, really it doesn't.  At least not that I'm telling.  And I'll let you know if it informs me that the Gods have returned from space.
Posted by ProfessorRoush at 7:00 AM