If there is any motivation that is most likely to change a mellow-natured gardener into a raving anti-government libertarian, I believe that it is the semi-annual ritual we go through here in America involving the move to and from Daylight Savings Time.  No greater proof exists that government has intruded into our private lives than its audacity to mess with our internal biological clocks.
As lamented by other gardeners this week on several garden forums, most perturbing of all is that I no longer get to see my garden in the daylight during the weekdays since it is suddenly dark as I come home from work. My relaxing evening stroll around the garden is gone and my quick jaunts outside to photograph the last rose or the last daylily are over. I'm entering the long winter's depression of not being able to see anything living or growing for days at a time. 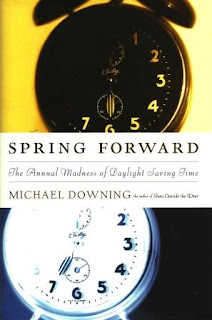 The whole history of Daylight Savings Time (called "summer time" in Britannia) is quite interesting and entire books have been written about it. Whether you want to blame Benjamin Franklin or George Vernon Hudson (an entomologist who liked the increased evening light for collecting bugs) or Robert Pierce (a Liberal Member of Parliament who wrote the first legislation), or your respective meddling government divisions, most of what you think you know about Daylight Savings Time is either not true or is debatable. It doesn't routinely save energy, in fact in warmer areas it increases energy use because air conditioners are used more when the evenings are longer. It reduces late afternoon traffic accidents, but causes difficulties and increases costs for business with travel, timekeeping, and record-keeping efforts. It primarily benefits retailers and sports venues, at the expense of late night entertainments and farmers. And we have no idea what fiddling with our biological clocks is doing to our health. I'm sure that if I ran enough statistics, I could prove that DST causes cancer.
Benjamin Franklin, by the way, shouldn't be blamed. His 1784 suggestion to Parisians to rise earlier and use less candles (complete with suggestions for governmental taxes on window shutters and candle rationing) was a satire. Somewhere a number of governments haven't gotten the joke.
Please, I beg of the vast uncaring federal bureaucracy, either send us to DST year-round or at least leave us alone on Standard Time so we can adjust once and for all. I am a simple native farmboy, raised to open my eyes with the sunrise and close them at sunset, and I have never adapted well to sudden changes in my wake-sleep schedule.  My failure to roll with the clock is arguably worse than for others because I was raised and spent my first 20 years in one of the small areas of the continental United States (Indiana) that never changed time until the bureaucrats messed with our biorhythms further in 2006. When I take trips, like my recent trip to the two hour-delayed time zone known as the West Coast, I've always found myself waking at around 4 a.m., raring to go while the rest of the city is still long asleep.  And then when the nightclubs or late evening business meetings beckon, I'm sure to be semi-somnambulate, or else actually dozing quietly between the rented hotel sheets, while the parties rage on.  I can only sleep in when I travel east.
My semiannual aggravation with DST is getting worse, not better, as I get older.  I just know I'm going to end up being one of those old farts who walk into the living room in my pajamas around 8:00 p.m. during the wife's Christmas party and proceed to tell everyone goodnight. Of course, as I age further and I cycle through DST a few more times, the guests will be lucky if I remember the pajamas.
Posted by ProfessorRoush at 3:30 PM