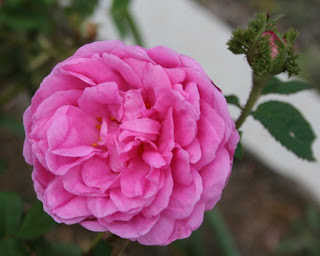 I am the proud landlord of one Old Garden rose that you may know better under one of at least 10 aliases, including Crested Provence, Cristata, Crested Moss, R. centifolia cristata, or R. centifolia muscosa 'cristata'.  I knew it first under the more fanciful name of  'Chapeau de Napoleon', a moniker bestowed because some think that the fringed calyces resemble the tri-cornered hats worn by the famous French emperor.  The "proper"appellation, if you want to exhibit the rose in competition, is 'Crested Moss'.  In private conversation, of course, we of the bourgeois or peasantry classes can simply call it "Napoleon's Hat" and every rosarian will know the rose we're talking about.  Well, most of them will, but one should be aware that DNA analysis has shown that 'Crested Moss' is not the same rose as 'Crested Provence'.  As with any number of roses, the fact that they look alike doesn't necessarily mean that they are clones of one original plant.

'Crested Moss' is a once-blooming, medium pink, double-petaled rose that was actually not known when Napoleon was alive, but was a "found rose" discovered some years later (some authorities say as early as 1820, others as late as 1827).  'Crested Moss' is believed to be a sport of Centrifolia muscosa 'communis', the 'Common Moss Rose'.  Most sources, especially those written shortly after its introduction by Vibert in 1828, suggest that it was discovered in 1827 near Fribourg, Switzerland, growing in a monastery wall (or a nunnery wall). 'Crested Moss'  has been used extensively in hybridization by Ralph Moore and those efforts are reprinted on Paul Barden's website in an article by Mr. Moore.  He writes that the rose is usually sterile and does not set seed, but he was once able to collect enough pollen to cross with 'Little Darling', 'Baccara', and 'Queen Elizabeth'.  Ralph Moore noted that since those first attempts, he was never again able to find anthers (pollen) on any plant of 'Crested Moss'. 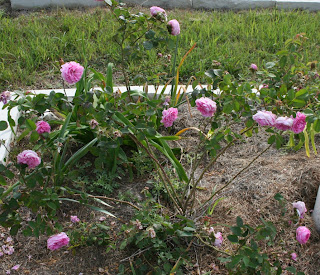 In my garden, my two year old plant has the characteristic sparse foliage noted for this rose by Paul Barden, and the reputedly slow-growing plant stands about 2 1/2 feet tall at the time of this writing.  The foliage has grown more dense over the summer since flowering and the bush has achieved a more rounded form with a little judicious pruning.  'Crested Moss' is cane-hardy here in Kansas and it has withstood the current drought very well.  If you choose to grow it, you'll be rewarded annually by the strong damask-type fragrance and the clear pink color of the blooms.  If nothing else, the mossy calyx (a collective term for the sepals of a flower) creates a unique memory for visitors to your garden.  More than once, I've been near a point of failure in my attempts to excite a new visitor about the roses, but when they spy these unique buds, a connection forms and they start spewing forth questions. Questions that I usually can't answer, but at least I no longer have to search among mundane gambits to elicit conversation.  "How about this weather?", or "How about those Wildcats?" get tossed aside for a more stimulating discussion (at least to me) of Napoleon's three-cornered hat.  I am almost always able to restrain myself and stop before the visitor's eyes completely glaze over once again.

Posted by ProfessorRoush at 2:30 PM