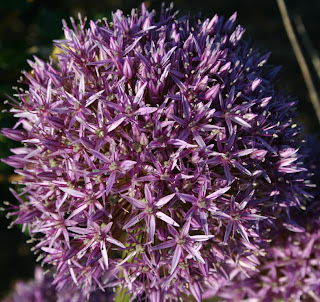 Are you kidding me?

This morning's edition of our local paper reprinted an article that caught my attention big time. Caught my attention and made my eyes bug out.  From the Daily Press as written by a Ms. Kathy Van Mulleskom, it was titled Alliums Provide Color For Three Seasons.

Really? Are you kidding me?  I don't know what planetary eden Ms. Mulleskom comes from, but the first two lines of the article stated that (I'm paraphrasing here), "Planting alliums is one way to realize the dream of a garden that's colorful spring through fall." 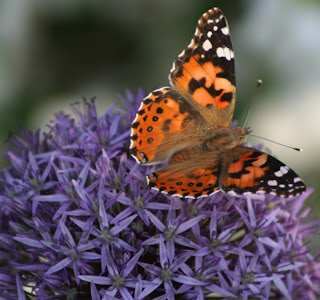 Now, truth be told, I like alliums in a spring-bulb sort of way.  They're colorful, they're healthy with little care, some varieties are very large and very tall, and they draw butterflies to them like they were made of pure sugar.  My 'Globemaster' alliums, pictured here, draw all the attention in my garden at their peak and Mrs. ProfessorRoush never fails to comment when they're blooming.

But alliums are, without doubt, a one season plant for Kansas.  Ms. Mulleskom does correctly note that by selecting among the varieties, the bloom season can be extended to six to eight weeks.  She also cheerfully points out that the height of some varieties can be an architectural feature.  But we differ on the value of the second and third season for these marvelous bulbs.  In the article, she says "after bloom, the dried golden brown allium seed heads stand tall amidst lush late season flowers."  They also last "sometimes into winter." 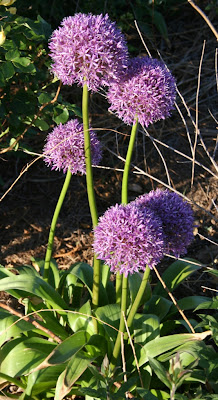 Let me tell you, whether they are "brown," or "golden brown" by July, neither is a real color for the garden.  Brown is okay on a desert landscape painting or on the Mona Lisa, but in the garden "brown" is the color of death, the Final Color, and it doesn't add anything to the garden palette.  And winter?  I just went out to take a picture of the brown-headed remnants of my alliums and here, in early September, I could find a few remaining allium stems laying on the ground, marking the resting spot of the subterranean bulbs, but there is nothing left of the globes to be picturesque or even present when the snow falls.  Perhaps the Kansas wind has swept them away already.

Mrs. Mulleskom, who is evidently an accomplished gardener and who blogs here, quotes Hans Langeveld of Longfield Gardens as saying "the seed heads (of alliums) are every bit as cool as the flower."   Maybe, just maybe, I'll agree that they are "cool" to myself and to my fellow gardening nerds, but if they're a three-season garden stalwart, then I'm a garden toad.
Posted by ProfessorRoush at 7:49 PM