It is time, I think, to set aside all my grumblings and cursings over the fickle weather impeding the onset of Spring here on the Kansas prairie, and to look instead towards the future bloom of my garden.  One rose that I've briefly touched on before is the beautiful cream-white Griffith Buck rose 'Prairie Star', and while we are waiting for the bloom of new roses in my garden, I feel I should formally introduce her, a debutante coming-out party, if you will.

I've grown 'Prairie Star' since the very start of this current garden, some 14 years ago now.  My neighbors and I, as part of a new development, were able to name the road we live on and we had chosen Prairie Star Drive to commemorate the starry night skies we live under.  It was a quick decision, therefore, when I soon after discovered the existence of a rose named 'Prairie Star', that I purchased and placed her into a new garden bed, where she remains today, surviving the worst of heat, cold and drought that the Kansas climate has thrown at it. 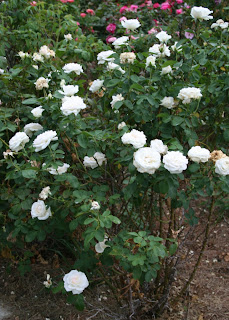 I won't try to pretend that 'Prairie Star' is the best of the Griffith Buck-bred roses I grow, but she is a tried and true survivor here in the Kansas climate.  At maturity, this shrub stands a little over three feet tall and slightly less wide, and she is always clothed in dark green, glossy, disease resistant foliage times.  I never, ever have to spray 'Prairie Star' for blackspot prevention, and she drops very few of her lower leaves even in the worst of summer.  More than that, I can't remember ever having to prune this rose, for she rarely has a dead cane or dieback to contend with.  Introduced in 1975, she has a moderate fragrance (although I cannot detect the green apple tones she is rumored to have)and very voluptuous double form with 50-60 petals per each 3 to 4 inch diameter bloom.

Where I differ with official reports is that everywhere you look, this rose is described as being pale chrome-yellow, with pink undertones.  Helpmefind.com, Heirloom Old Garden Roses,  Iowa State University, no matter where you look, they all talk about a yellow tint to the blooms.  I have two bushes of 'Prairie Star', purchased from different nurseries (one was, in fact, Heirloom Old Garden Roses), and neither regularly shows any signs of yellow undertones here in Kansas.  Perhaps, in the right light, in the center of the bloom shortly after opening I could acknowledge a hint of a tan, but it disappears quickly in the sun.  I would have described her as white, with pink undertones that increase in cooler weather.  Extremely sensitive to climate changes, in hot weather she'll open and stay a virginal white but she almost rivals 'Maiden's Blush' in pink tones in early Spring and late Fall.

The drawback to 'Prairie Star', at least in this climate, is that she rarely has a bloom without a blemish of some sort.  These defects can be almost invisible as in the picture above, or quite distracting, as in the picture taken in cooler September weather at the right.  I love the white or blushing purity of the blooms, and she reblooms continuously after a large early flush, but the blemished blooms, worsening in cold wet weather, leave me often disappointed.  I view her as an otherwise ravishing maiden perceived to have a flawed moral character deep down inside.  Her strong suits are rebloom, disease resistance, and form, so as a landscape specimen, she certainly holds her own from a slight distance away.  In an environment where she could be raised without blemish, I predict that she would have no peer, as perfect as you could ever want a rose.

Posted by ProfessorRoush at 2:17 PM