As large shrub roses go, I believe that 'Sir Thomas Lipton' has gotten the short end of the stick and I'd like to apologize to its Scottish gentleman namesake for listening to the lack of hype regarding this rose. 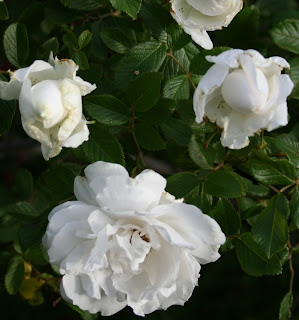 The real Sir Thomas Lipton (1848-1931) was a Scotsman who was a persistent America's Cup challenger and who founded the Lipton Tea Company.  'Sir Thomas Lipton', the rose, is a hybrid rugosa introduced in 1900 by Van Fleet, he of 'New Dawn' fame. It was product of a cross between R. rugosa alba and the lovely Polyantha ‘Clotilde Soupert’.  My specimen is about 6 years old now and approximately 6 feet tall and 5 feet wide, blooming profusely with fragrant, pure white double flowers that are about 2.5 to 3 inches in diameter.  The foliage is rugose, medium green, and wrinkled as fits the heritage of this rose, and it requires no fungal spray here in Kansas summers, nor does it seem to be bothered by any insects.  A Missouri website says it may need crown protection in St. Louis, but I highly doubt it.  I've never seen any winter dieback here in Manhattan, Kansas, and it also has survived an ice storm unscathed that broke off and flattened large portions of other roses, so I've got a little faith in this rose. At least one source says it's hardy to Zone 3 and I believe it. 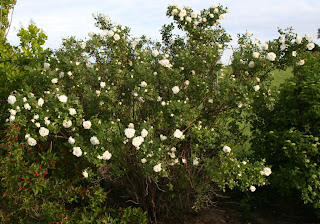 I avoided this rose for years on the basis of Suzy Verrier's description in her Rugosa bible, Rosa Rugosa. She writes "Unfortunately, this poor representative of the rugosa hybrids is widely available....'Sir Thomas Lipton' is ungraceful and rigid in its growth and has the nastiest thorns imaginable...rare repeat blooms."  Wow, Suzy, give it to us straight, don't beat around the bush!  Many other writers also suggest that any repeat bloom is sporadic and not noticeable, however, I would disagree since my specimen seems to keep blooming throughout the season, not perhaps with the abundance of the first spring bloom, but with an acceptable repeat that never leaves the bush without a few flowers. This rose may be a perfect example of one who performs differently for rosarians in various climates. Sources also argue about the fragrance of this rose, with some saying it has a strong fragrance and others saying it has no fragrance at all; I would call it moderate, a "3" if an average Bourbon, say 'Variegata de Bologna' is a "5".  Ms. Verrier is right on target about the thorns though;  this rose would make a formidable security hedge.

I do find it interesting that it is often compared with 'Blanc Double de Coubert', the classic white double rugosa, and favorably.  Peter Beales, in Classic Roses, says that 'Sir Thomas Lipton' is "Not unlike 'Blanc Double de Coubert' in many ways, including colour, but with a few more petals in the flowers," That is high praise when you consider that a few pages previously he describes 'Blanc' as "one of the outstanding Rugosa hybrids."   So, in the end, it seems that 'Sir Thomas Lipton' is a rose you'll either love or hate, but I've found it worth a try as long as you're ready to shovel prune it if it isn't suited by your climate.
Posted by ProfessorRoush at 5:20 PM