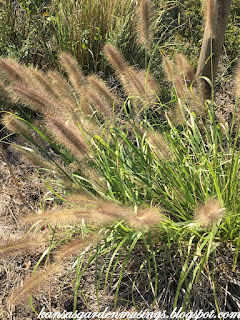 To live in blessed harmony on the Kansas prairie, every gardener must, of necessity, learn to grow and appreciate ornamental grasses, and even rose-crazy ProfessorRoush is no exception.  I have long been an ornamental grass devotee and I grow a number of Panicums, and Calamagrostis, and Miscanthus to fluff up my autumn garden.  I have however, until now, been somewhat neglectful of giving full appreciation to Pennisetum alopecuroides 'Hameln' as a garden necessity.

I've had this clump of 'Hameln', and one other, for 5 or 6 years, and I never felt that it deserved the accolades it receives from the sales catalogs. Monrovia raves on it, calling it an "attractive grass highlighted by fluffy, buff-colored plums....terrific contrast among shrubs...foliage turns golden-russet."  My experience is more like that of "Chataine" from Rose City Texas.  On davesgarden.com, Chataine wrote "It gets huge--easily 4 feet tall and 5 feet across. It’s a water hog. It self-seeds prodigiously. It grows in ever-widening concentric circles around a dead center. It’s a great hotel for fire ants. It laughed at the grassy weed killer I poured on it. I finally had to dig them all out, and am still recovering from the whole experience."  In the next review on davesgarden, "Kilizod" from MA, put it more bluntly, saying, "I think this grass looks like a weed early in the season." 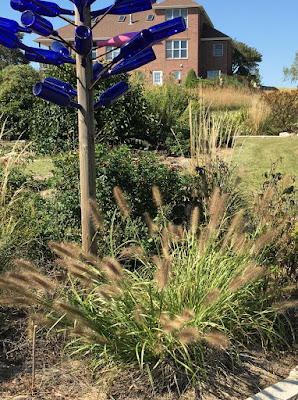 My clumps were divisions from established clumps at the KSU gardens, gifts gratefully received from the garden director during fall cleanup in the garden.  Admittedly, I give them no extra attention or water, and barely remember some years to throw a little fertilizer on them.  And they responded to such loving care by being fairly unremarkable, a moderately low clump of grass with a few uninteresting fall seedheads.  One clump, in fact, shriveled up in last year's drought and then refused to return this spring.  But this year I finally understood the draw of 'Hameln', or alternatively my 'Hameln' finally decided to quit sulking in the Kansas sun.  Like many of the native prairie grasses, it responded to this year's ample rains by growing to its heralded potential and flowering with unusual abandon.  And I love it. And since the rain nearly drowned out my roses this year, I needed something out there to make up for them.  If it has to be 'Hameln', and not to be roses (get it? "to be or not to be?"  "Hameln?"...chuckle), I guess I can live on that till next year.

Posted by ProfessorRoush at 10:15 AM