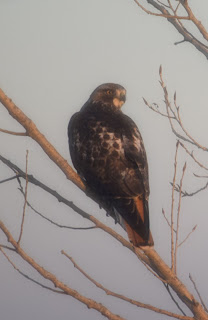 I write today in awe of one of nature's most finely-tuned predators, the Red-Tailed Hawk, Buteo jamaicensis, ubiquitous on the Kansas prairie and deadly in that realm.   It may have been first described to the Western world from sightings in Jamaica, hence the species name, but it does pretty well on mainland North America.  The photo at the right, of a watchful Red-Tail, ensconced on my cotton-less and currently leaf-less Cottonwood, was taken yesterday evening from my bathroom window, a mere 50 feet from the silent vigil.  The Cottonwoods in my yard are the tallest trees available for a circle of approximately 60 acres, and they are finally large enough to serve as aerial perches for surveillance and attack.  When I took the picture, the coyotes were beginning to howl from the bottoms and the hawk kept looking that way at each new howl, distracted from its concentration on the grass just below it. 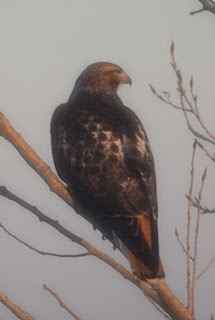 We work, the Red-Tailed Hawk and I, with the common goal of population control of the prairie mice and pack rats, although our motives are vastly different.  She aims to feed, herself or her family, on the wholly scrumptious intestines of any little ball of rodent flesh she catches.  My intent is to protect the landscaping from damage, the house from infestation, and my family from disease (i.e. scary things such as Hantavirus).  I only wish she would rid me of the adult rabbit that is currently occupying my front garden beds. I see a brazen lagomorphic lout every morning;  as I open the door and flip on the outside lights to let Bella out, it runs across the front sidewalk, not 6 feet away.  Every morning.  I just know that if I don't get rid of it, I will soon find that the Burning Bushs' have been chewed down to kindling. I know that Red-Tails do feast on rabbits, but it is hard for me to believe they regularly make off with adult rabbits.  In that regard, I have hope for the Great Horned Owl that I hear hooting every few nights.   I suppose it is past time to set out the humane rabbit trap and relocate Mr. Cottontail far away.

As a soft human, I can only marvel at the sharp eyesight and patience of this common prairie denizen.  Sitting in a tree, or soaring in circles above the tallgrass prairie, they can spy the slightest movement, the most furtive rodent slinking, and pounce in an instant on prey.  I have the privilege to observe the moment of capture several times a year, so common is the occurrence here, but I'm always left breathless and stunned by the speed of the stealthy diving swoop. I'd love to show you a picture, but I'm sure that I would spend endless weeks in the grass, camera in hand, before I would ever get that lucky.   Just as recently as early September, however, when I was mowing some of the prairie grass to benefit the donkeys, a hawk audaciously grabbed a pack rat from right in front of the moving tractor.  Was it a Red-Tail?  I wish I could tell you.  There was a blur, a thump audible even over the tractor engine, and a large bird lifted off from the ground, a struggling pack rat clenched in its talons.

I cheered the hawk, blessed the wonder of the moment, and kept on mowing.  I hope it ate well that night.
Posted by ProfessorRoush at 5:20 PM