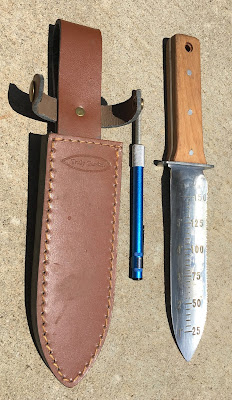 ProfessorRoush is not an innovator.  He has not, does not, nor will not ever claim to be an early adopter of technology.  Yes, in the early 1980's I took to computers like a duck to water, but as a moderately dexterous manual typist (and "Kelly Girl" for approximately 2 days before I found more manly employment), computers were simply a convenience and a logical next step to a logic-inclined mind.  And so it is that it has taken me all these years of gardening to purchase am actual Hori Hori, a so-called Japanese gardening knife.

My garden knife itch has been half-formed for years, curiosity capturing the crusty gardener's conscious thought, but took full force this spring, and I began a search for a proper Hori Hori knife.  Locally, there was little to satisfy my thirst, only plastic-handled half-creations or mass-produced garden butter-knives to be found.  On-line, of course, the possibilities became endless as I sorted through sheaths and steel alloys and sharpnesses.  I became self-educated on tangs and enraptured by rivets.  Heft and handles were considered with heavy import.

Ultimately, I chose the Truly Garden Hori Hori knife for $26.38, although this design looked similar to many others (Duluth Trading, LifeWell etc) which are all likely of Chinese manufacture.  Comprised of 420 stainless steel, it has a full tang for strength, hardwood handle, and three rivets (many have two) for strength.  It is marked both in inches and millimeters, has a curved surface for easy plunging into soil or enemy, and has both a sharp edge (very sharp, as advertised) and a saw-toothed edge.  It came with a massive leather sheath and a free diamond sharpener, bonuses that seemed worth the extra few dollars above the $19.99 nylon-sheathed offerings.

My only question now is, "What took me so long?"   In just a few weeks, it has become my constant gardening companion, constantly sheathed at my side like a sword on a Crusader.  Plunge it into the soil next to the weed, even into my rocky soil,and a simple twist of the sharp edge towards the weed stem delivers most of the root into your hands.  The curved surface has made it useful as a planting tool for transplants.  I've used it as a short machete on thistles, to saw small limbs, prune new shrubs and to cut packages and twine and cable ties at abandon.  I haven't yet needed the measurement markings, but I suppose they will save me a walk to the barn the next time I have a need to measure something in the neighborhood of 6 inches long.  Its weight and balance are perfect, solid strength symbiotically matched to exquisite sharpness.  My only complaint is that, as a lefty, I'd like the sharp side and the saw-toothed side reversed.

I was picky about my choice of a Hori Hori because I was thinking of a provenance, a hand-me-down designed to reach future generations.  I can already tell, however, that this one won't be passed down in mint condition, but with that wonderful patina of use that proclaims its real value.  The heirloom will have to be my other garden knife, a rose pruning knife with a rosewood handle, also of full tang and three rivets.  I purchased it years ago and it has gone unused beyond occasional covetous fondling and oiling.  It never became the rose grafting knife that I intended, I suppose because my hands and gardening are more suited to dirt stabbing than fine pruning.
Posted by ProfessorRoush at 11:47 AM