Where to begin?  It's been so long since my last post.  I had the desire, I had the need, but I lacked the final urgency to blog.  There was always something more pressing, more distracting, more immediate.  Excuses aside, by late August, I gave up on the garden and its Japanese Beetles and its drought. I was trying to ignore the actions of some unknown burrowing creature that was attempting to dig half of the garden up and I was disgusted by the lack of blooms and wilting daily along with the flowers.

Renewal, however, is always just around the corner in a garden.  There were always bright spots, refreshing moments like the 'John Cabot' rose (photo above) trying to climb through an old sitting bench near it.  The spray was half eaten away, but it still shone like the entrance to heaven from halfway across the garden.  I rallied in time to purchase a couple of dozen daylily starts at the local sale and gathered the energy to water them enough to keep them alive.   And the irrepressible  crape myrtles bloomed on time and gave way to panicled hydrangeas and late summer shrubs in their due time.

By September, we had a deficit of 10 inches of annual rainfall, almost half of the normal total expected.  Then, in a single night, the drought was extinguished by a deluge, parts of Manhattan were temporarily under water, the farm ponds filled and overflowed, and the ground cracks disappeared.  Over the following 2 weeks, three separate rainfalls added another 11 inches to the total, a year's rain in less than a month, and the world was mud.

Fall was nice while it lasted.  My young Sweet Gum, Liquidambar styraciflua (above, left), won my undying gratitude for its glowing orange fall foliage, and the prairie began to greet the sun every morning with its own display of gold and rust (below).  There are many here who believe fall is the best season on the prairie, and I can scarcely find any reason to quibble. 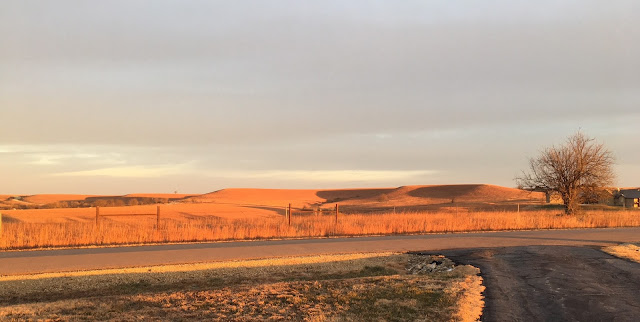 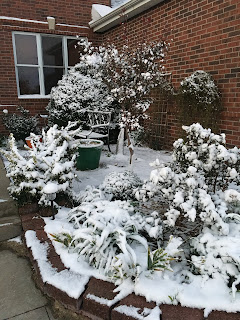 Despite the rejuvenating rain, the garden had little time to respond, as fall was short-lived.  On October 15th, two weeks earlier than any I've seen in 30 years of living here, we got a heavy wet snowfall of 3 inches.  While it made a winter wonderland of the landscape, it was an early finish to the annuals and the sedum and the chrysanthemums.  You can call it "weather," instead of climate change, all you want, but a record-early snowfall of decades, to the garden and to me, suggests that things are getting colder, not warmer.  We've already had 4 separate snowfalls in the last month, another anomaly for my scrapbook.  My unscientific conclusions were also bolstered by the "climate" of last weekend, as we smashed a 110 year old record overnight low for the date.  Maunder minimums, meet the 3rd millennium!

I'll leave you, here on the 2nd day of December, 2018, with these last two pictures to ponder.  The first, taken at 7:52 a.m last Sunday, was my back garden at the start of a day of incoming climate.  The second, taken just after 11:00 a.m. through the same window, the frozen tundra that was previously my back garden.  That morning, if a mastodon had come lumbering out of the gale-driven snowfall, I wouldn't have batted an eye.  Except for the 4 foot drift on my front sidewalk, which I shoveled away while I composed a spirited few words that might have taken Al Gore's name in vain, most of this snow is already gone, feeding the prairie grass roots deep in the saturated soil.   This year, at least, I won't have to worry about the lack of soil moisture available for the shrubs as the ground freezes and churns.  Climate-change has its own little gifts, I guess. 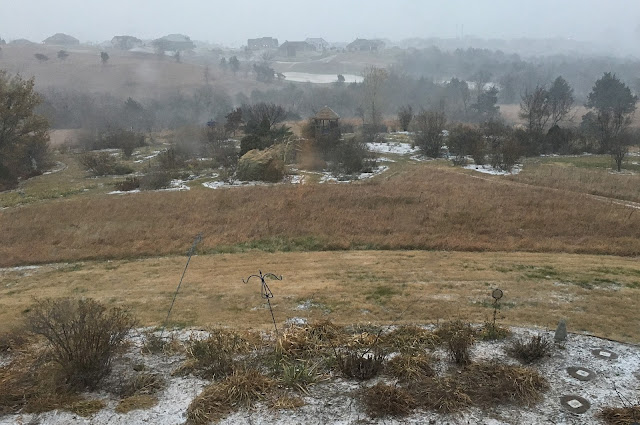 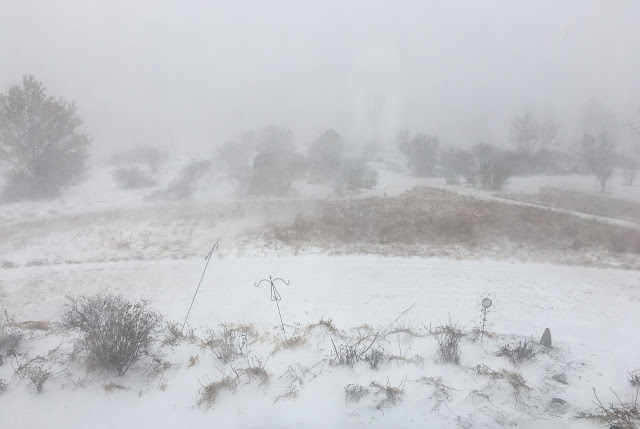 Posted by ProfessorRoush at 7:02 PM