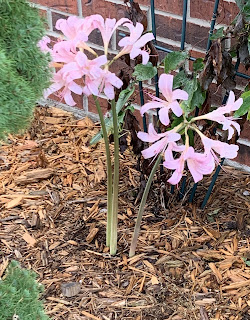 Occasionally, during the hum-drum of daily garden affairs (and often, as it happens, while mowing), ProfessorRoush's mind plays a little fantasy game.  A little game called "if I were moving, what plants and things from this garden would I want to take or duplicate?"  It's a thought experiment that can be endlessly repeated based on the size of the retirement garden to which one aspires.  And it suffices to pass the time while mowing.

This week, it was the Surprise Lilies (Lycoris squamigera) that prompted the onset of the mental gymnastics.  They've been in my garden a number of years and they never fail to surprise and delight me, as they have yet again this season.  Sometimes, in the spring, I'll see the daylily-like foliage and have to think a minute to remember not to weed it out, but I've spread these so they now pop up several places in the garden.  Whether my next garden is 10 acres or 10 square feet, I always want these Naked Ladies (their other, less politically-correct name) to pop up and delight me.

What else, from this pre-Fall period, would I want to preserve?  Well, crape myrtle 'Cherry Dazzle' is not maybe the most spectacular crape I have, but it certainly never disappoints with the color and floriferiousness and its under 2' circumference would fit in a small garden.


I wouldn't want to live without a panacled hydrangea around this time of year, 'Limelight' or some other.  I just enjoy their brazen display when all else is turning brown.  And the Sweet Autumn Clematis (Clematis terniflora) is starting to bloom and by next week it will be perfuming the garden from one corner to the other.  How could I go on gardening without at least one massive tower of C. terniflora?  Unfortunately, with Sweet Autumn Clematis, having just one is the difficult part since it self-seeds everywhere in my garden.

And then, last but not least on the seasonal list of plants that I would just have to move, there is the phlox 'David', massive pure white heads standing straight and tall, unmarred by sun and rain.  'David' is easily transplanted and easily propagated.  I believe it also comes true from seed, and doesn't revert to pukey majenta like many garden phlox seem to.  There actually may be an advantage to allow it to self-proliferate, because I have clumps that look identical but bloomed more than two weeks apart in the same bed.  I bought one plant of 'David', one time, and now I have 6 or 8, spaced all over the garden beds.  Yes, I divided and moved it once or twice, but it grows now in places I never placed it, where it had to have self-seeded.

Unless, of course, it grew feet and walked.  Sometimes plants try to sneak past an inattentive gardener.
Posted by ProfessorRoush at 5:32 PM