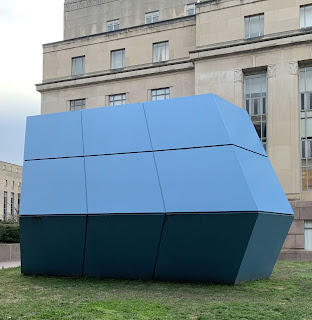 I have spoken before, tongue-in-cheek, of She Who Must be Obeyed, easier abbreviated as the acronym SWMBO, in reference to the beautiful and home-ruling Mrs. ProfessorRoush.  Imagine my surprise then, while google-navigating across the Washington DC landscape the week before last, when I saw "She Who Must Be Obeyed" pop up on the google map on my iphone a few blocks from where I was at the time.  Feeling a sense of unease at my prescient phone and wondering why my wonderful spouse might be stalking me halfway across the country, I decided to meander innocently in the direction the map indicated, fully prepared to explain why I had wandered from the conference that I was supposed to be attending. 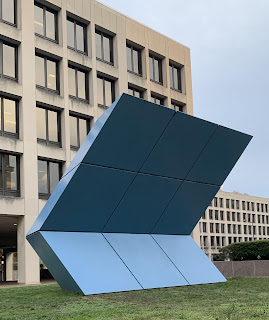 Eventually, I came across this somewhat enigmatic modern sculpture by Tony Smith which is titled, you guessed it, "She Who Must Be Obeyed."  It sits innocuously on the plaza lawn of the Department of Labor building (the Frances Perkins building) near the east wing of the National Gallery of Art, hidden from broader view by the buildings around it and unvisited by the art-unwashed like me.  My personal tastes in art, as described before, trend to figures recognizable as tastefully nude humans or cuddly animals, not abstract geometry.

While I was humbled that a statue was named after my lovely wife, this minimalist rhombus does not look anything like her, nor does it do any justice to the feminine figure of Mrs. ProfessorRoush.  The statue does have a mildly disapproving air about it, but that is as far as the resemblance goes.  I am further a little bit angry at the artist for the flippant naming of the structure, likely to cause confusion and anxiety in any married male who comes across the statue in a blissful moment of hiking across the D.C. mall.  Shame on you, Mr. Smith, for this monochromatic miscreation.
Posted by ProfessorRoush at 6:00 AM