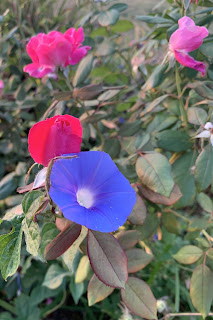 The slothful side of ProfessorRoush unabashedly slithers up in late August each year.   As September slowly slides in, I tire of mowing and weeding and trimming, all too ready for the garden to frost over, to die away and let me rest.   It's now that the morning glories seize their chance, rampantly growing over everything in sight and transforming the garden into a blue oasis of heaven.

In point of fact, I don't know if my ubiquitous morning glories are the 'Heavenly Blue' cultivar of the species or just the wild Kansas Ivy-Leafed Morning Glory (Ipomoea hederacea), but they are everywhere.  They invade quickly when I stop weeding in July, when I am weary of the gardening battle, and they take advantage of my weakness to drape every plant within reach.  And I let them, for I treasure that light sky blue shade above all hues in my garden. 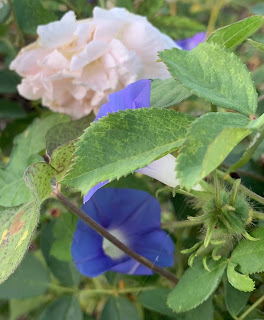 I was struck recently by the combination of the morning glory with the Canadian rose 'Winnepeg Parks' (above), the surreal, otherworldly blue morning glory jarringly visible against the pink rose, clashing across the color wheel to a striking contrast.  'Winnepeg Parks' is a Parkland series Canadian, unfailing blackspot free in my climate and a reliable periodic bloomer.   Growing into another rose, chaste 'Morden Blush', Ipomoea blends much better, a companionly match of color for a calming scene. 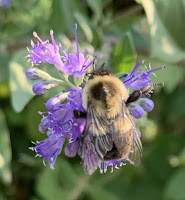 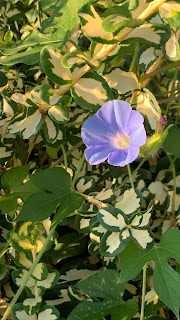 Even the tired foliage of variegated euonymous 'Moonshadow' is improved by a little "morning glory."   This picture at the right, suitable for framed artwork against the right light blue wall, just pleased me to no end as I took it.  I missed capturing, however, the bees that were darting in and out of the blossoms, the bumblebees every bit as appreciative of the morning glory as I am.   In the early morning right now, two plants draw the bees;  morning glory and caryopteris; both blue and beautiful.   However early I join the garden, the bees are already there. 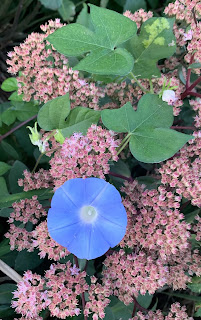 Two or three weeks after I took the first picture above, the morning glories and caryopteris are still going strong, now lending their gentle contrast to the tall sedums, neighbors by location, opposites of plant physiolgy.  You have to get up pretty early to catch the sky blue delicate blooms, as they close when the sun begins to shine with any vigor, but the tougher sedums that support them continue on each day, oblivious to the sun, "feeling the burn," as it were.  ProfessorRoush enjoys both lives, early to rise and walk, thriving in the sun, and resting at night in preparation to bloom yet another day.
Posted by ProfessorRoush at 9:19 AM