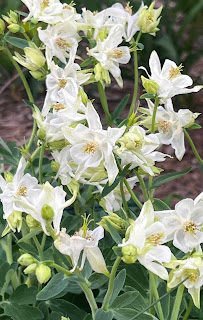 Turnabout IS fair play, isn't it folks? "Any eye for an eye?" Or is it "all is fair in love and war?"   Whichever the case may be, my post today is a sweet and long-awaited revenge on Mrs. ProfessorRoush, who regularly steals my photos from this blog for her Facebook page and whom, I might add, seldom gives credit for the artful photography she pilfers.  I'm, as you might say, "returning the favor" with my photo-heavy blog today.  Today's words are mine, but the pictures are all from HER Facebook.  Ha! 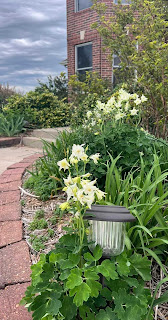 In my own defense, I couldn't help but download these beauties from Mrs. ProfessorRoush's Facebook because she's really upped her photo game.  Many of these photos are not merely the pictures of pretty flowers that she usually captures, they were COMPOSED, artfully arranged according to classic principles such as placing the subject by the "rule of thirds" and using depth of field.

Look at the beautifully photographed white Columbine above.  Mrs. PR got it perfectly right, with the most focused bloom precisely placed in the upper left third.   But then, as in the second photo, she incorporated depth of field with the same subject, placing the columbine in perspective against the house and cloudy sky behind it. 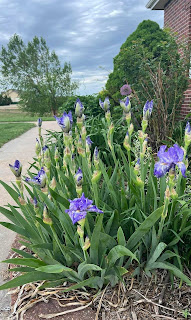 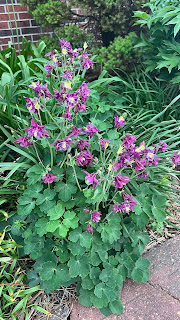 Here, another example of photographic value of thirds, this nice double-flowered purple columbine, it's unblemished foliage in the lower left third balanced by the out-of-focused green foliage in the upper right and contrasted against the bright flowers on the left of center.   The grounding weight of the columbine foliage at the base of the photo is almost palpable. 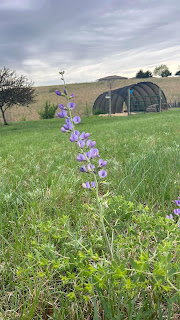 Mrs. PR has even evoked emotion with her photos!   Can't you just feel here the loneliness of the single native Baptisia australis (Blue Wild Indigo)  among the new prairie grasses, my garden shade house far in the background?   Hear it calling "here I am, here I stand, fragile yet defiant."   What a nice composition and what a vivid message. 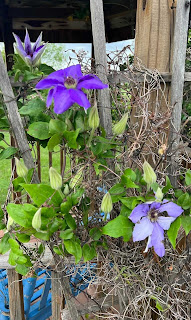 And what of the contrast of the rustic look of the old trellis that stands attached to my gazebo, here with the newly blooming 'Ramona' clematis?   That trellis is a decade old, weathered, splintered, and, in truth, probably held up only by the young, beautiful and vigorous clematis.  Somehow here, in the back of Mrs. PR's mind, there may be some semblance to the old weathered ProfessorRoush and his eternally young and beautiful bride.  Or is the similarity sitting in the back of my mind? 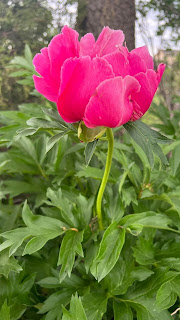 Gaze for a moment on the perfect pinkness of this 'Scarlett O'Hara' peony in silhouette, all life and color among the healthy green foliage.  Since 'Scarlett O'Hara blooms early and brazenly, I refer to her as Scarlett the Harlot and so I might title this "Silhouette of the Harlot".    Titles are fleeting, but beauty eternal. 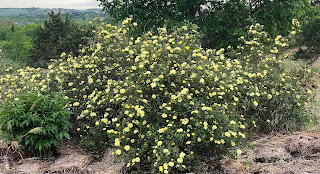 We might have had to admonish Mrs. ProfessorRoush this lapse into  the "Oh, Wow" centered composition of my massive and spreading 'Harison's Yellow.'   In her defense it is difficult to ignore the sheer floriferousness and vivid yellow of this Hybrid Spinosissima when she's in full bloom.   But even here, as you can see in the photo below, Mrs. ProfessorRoush suddenly redeemed her artwork, stepping back to use the 'Harison's Yellow' as a mere color spot in the line of the bed connecting with the Cottonwood of the background, framed within the confines of the nearer Purple Smoke Tree to the left and the American Elm to the right.  Bravo! Belisima! Magnifica! Mrs. ProfessorRoush! 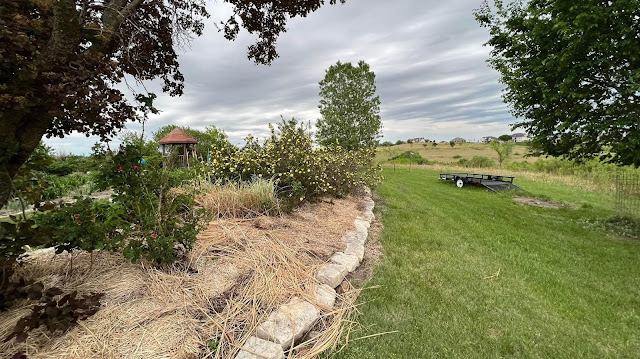 My garden, through another's eyes, through a lover's eyes, is new again.
Posted by ProfessorRoush at 2:57 PM