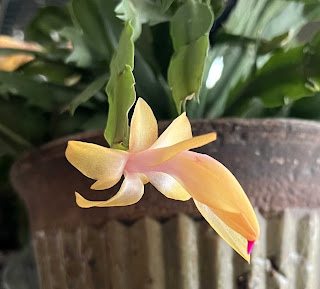 While ProfessorRoush is usually a reasoned and contemplative individual (please pay no attention to Mrs. ProfessorRoush's cackling in the background), I am not ashamed to admit that the occasional attractive conspiracy theory does obtain some small foothold of territory in my mental processes.  In contrast, however, to those crackpots who insist that there was never a moon landing or those who maintain that the earth is flat, despite all the growing evidence against either view, I feel compelled to reveal, here for the first time, a real, personally documented, grand conspiracy.

I'm positive that all of you, all gardeners and shoppers, all homeowners and plantspeople, have been experiencing a great sense of unease as Thanksgiving approached and local store aisles filled with holiday decorations and unwanted unnecessities, yet you've all likely been unable to pinpoint the cause of your disquiet.  I'll admit that I shared that underlying apprehension with you, until suddenly a great revelation appeared to me last week and, to my eternal shock I became aware, you might say "woke", that one of the great mysteries of civilization had been developing right in front of my eyes; a mystery I shall now reveal. 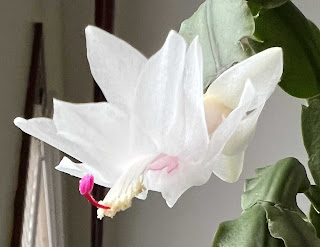 WHERE THE HECK ARE ALL THE CHRISTMAS CACTUSES THIS YEAR?   Normally, by this time, every checkout aisle and every floral display area would be filled with wilting but blooming $6-$9 pots of colorful red and white and pink and fuchsia Christmas cacti raised especially to capture your whimsy and your excess cash during your vulnerable moments of holiday shopping.  This year, there are none available, not one anywhere near Manhattan Kansas, a fact which I confirmed by personally visiting every big box store, grocery store, and hardware store in the area this week.

I started out on this conspiracy track innocently, merely wanting to see if a new color or variety was available to add to my collection and brighten Mrs. ProfessorRoush's windows, yet the absence of the cacti became more evident with every store I searched.  Querying the internet for an explanation has been similarly unsatisfactory.  There have been no media reports of mass destruction of Christmas Cactus nursery facilities, nor scientific papers on sudden mutations of fungal wilt that threaten the extinction of the cacti group.  Asking Google the simple question "Where have the Christmas cacti gone?" is rewarded only by 10,591,251 occurrences inanely explaining how to make a cactus bloom, and it undoubtedly results in one's name being added to some secret list somewhere as well as causing your mail and social media feed to fill up with hundreds of ads for plant sales and fertilizer. 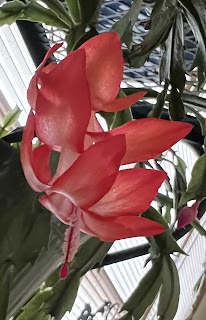 We will call it the Great Missing Christmas Cactus Conspiracy of 2022, or "CCC-22", and later generations will remember this blog entry as the initiation of the movement alerting the world to their loss.  It is a fact that Government officials are completely silent on the issue and appear to be taking no action to investigate the mystery.  This is surely an occasion for Congressional inquires and appointment of special prosecutors if ever there were, don't you agree?  The President, Dr. Fauci, or at least the Illuminati must be behind the disappearance.  No, wait, it's COVID-19, isn't it?   SARS-CoV-2 was not developed to destroy democratic societies, save Medicare, and unleash the New World Order, nay, the ultimate goal by some powerful fiendish billionaire Christmas-cactus-hater was for the virus to wipe out annual production and commerce in Christmas cacti, wasn't it?

If you don't hear from me again, you'll know I touched a nerve somewhere.   Wake up, everyone, before it's too late to save the cacti!  Write your Congresspersons, call your Senators, and let's make our Christmas-cactus-loving-voices heard!

Posted by ProfessorRoush at 10:29 AM