If you can handle the anger, frustration and disappointment of being a Kansas gardener long enough, you'll eventually receive the practical equivalent of a PhD in horticulture or plant pathology.  That wisdom, of course, comes in bits and pieces bestowed by innumerable little plants who came into your garden wholesome and happy from their nursery greenhouses and then exited from your well-intentioned care  in a brown and unhappy state.  Now, I'm not claiming that I am solely and personally responsible for all the plants that have expired in my garden despite or because of my efforts.  I'm certainly aided in that regard by ferocious winds, summer droughts, frigid winters, rabbits, deer, pack rats, and the occasional insect pest.  But when push comes to shove, I can usually point to a lack of knowledge or foresight that resulted in my abetting the actual criminals. 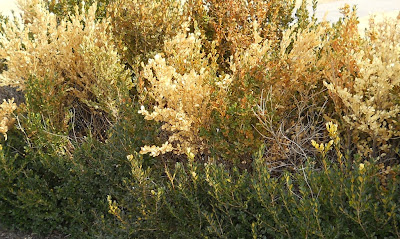 My hard-won garden lesson this year comes in the form of my front boxwood hedge, formed 8 years ago from twelve tiny plants of Buxus microphylla koreana 'Wintergreen'.  I planted this hedge around the curve of a driveway circle in front of the house to both define the circle when it was just a dirt and later a gravel path, and also to block a little Sha energy from the front entrance (some attention paid to Feng Shui never hurts).  These grew well for the first 6 years, but last year, in arguably the snowiest and coldest winter of the past decade, one bush in the center of the group had some stems which yellowed and died back. I wasn't sure of the cause, but a large snow drift did cover the center of this hedge for a couple of weeks in January, 2010, so I surmised it might be a little winter damage.  I treated it by some judicious pruning of individual branches and assumed new growth would cover the defect.
This year, after a second snowy winter, perhaps even colder than last, several of the center bushes have the same damage visible, as you can see from the pictures above right and below.  The picture below was taken just as the last remnant of another snow drift was melting, and as you can see, the damage is in the center of the hedge, right at the point where the highest drift occurred.  A little Internet research tells me that since it is unlikely that insect or fungal damage would occur only in the center bushes, this is probably just a classic case of winter injury to boxwoods.  Symptoms include yellowish, reddish, or colorless foliage, dead branches that occur particularly in the middle and apical parts of the crown, and loose bark or cracks in the stem, all of which fit my hedge.   Winter damage in boxwoods is exacerbated by allowing them to suffer in dry summers and  to go into winters without applying supplemental water, and I'm guilty of that since I haven't hand-watered these since 2005.  And it can be minimized by spraying with anti-desiccants in November and January, and my no-maintenance goals caused me to be guilty of that gardening transgression as well.  Guilty, guilty, guilty-as-charged.

Admittedly, hardy boxwoods are new to landscapes in the Flint Hills, and this hedge is an experiment to see if Global Warming has allowed us to shift climate zones.  After the severity of the past two winters, of course, I'm not sure that even Al Gore still believes in Global Warming.  I planted these because I like broadleaf evergreens more than conifers for Kansas landscaping, particularly since bagworms seem to be particularly plentiful in this area for gardeners who forego pesticides. I knew the constant cold dry wind in winter would be a challenge for the boxwoods, as would the full sun exposure of this area.  'Wintergreen' is one of the most cold-hardy of its cousins, as well as being the variety recommended to stay more green than bronze in winter so I thought I'd give it a shot. I also grow 'Winter Gem' and 'Green Mountain' in more protected areas as specimen plants and they seem to be doing alright where the wind isn't so dessicating and where the snow doesn't pile up.
So, for this hedge, instead of letting it grow au natural, unpruned, as I have in the past, this year I'm going to give it a second chance by pruning it to half-height, which will get rid of most of the damage and even out the topline.  I'll keep it watered better if it is a dry summer, but I refuse to stoop to spraying anti-desiccants.  the survival of these boxwoods is certainly dependent on thin ice, literally and figuratively.  Further bad winter damage in the near future and these babies get shovel-prunned in favor of something more resistant to the whims of Kansas.  Like a stone wall.
Posted by ProfessorRoush at 7:00 AM