The longer I garden, the more I appreciate and propagate Iris pallida 'Variegata' throughout my garden.  I've got a clump or two in almost every bed already, and I'm thinking about trying its effect in a single massed area, a shrine to spiky leaves of gold and green. 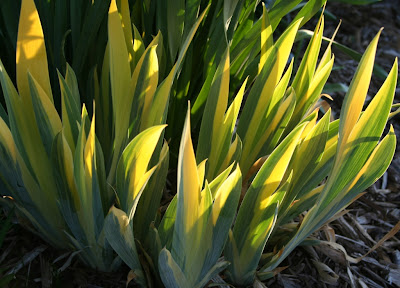 I obtained this iris somewhat by accident in 1999, not knowing then the treasure that I had purchased, but thinking the variegated leaves would stand out nicely against a darker green background. I'm sure I purchased it by its alternate name 'Aurea Variegata'; a name more descriptive of the creamy golden stripes. If you grow this iris though, you know that the variegation is only the beginning of the possibilities it offers.  A gardener should never place this iris against an oppressing opaque background.  The real gift is hidden until one views it placed in an elevated circumstance, at eye level, where the sun can shine behind those gorgeous spring leaves.  The picture at left, taken yesterday evening as the sun was fading, is only a small sampling of the beauty of the backlit foliage.

I'm ashamed to admit that I've never taken a picture of the light blue flower with its lilac tones and yellow beard, but I'll make sure to correct that this year.  Then again, this is not some fabulous modern hybrid with striking colors screaming "look at me."  No, this iris hides behind its plain appearance during bloom, holding the unsuspecting gardener at arms length.  It belongs, as I said, at eye level though.  If you don't examine this flower closely, you may never realize that it is deliciously scented with what I would describe as a sweet licorice odor.  "Sweet Iris" is another name for Iris pallida that perhaps fits better to those who know it for its fragrance.  A classic triple gardening threat, Iris pallida variegata; wonderfully scented, beautiful form as an accent, and the ability to pop out and be a specimen plant if placed correctly.

The names given this species seem to be as endless as its origins.  While searching out the native range of this plant, I came across references to it as a Mediterranean native, a native of the Southern Alps, and yet another article that referred to it as the "Dalmation Iris", so named because it is native to the Dalmatia province of Croatia.  In truth, this Zone 4 hardy plant is so easy to grow and undemanding of soil and water, that it has probably naturalized most everywhere that man and beast have taken it.  It is cultivated as a source of orris root, the essential oils extracted from the rhizome by drying, grinding, rewetting the powder, and distilling.  Said to smell like violets, orris root extract is also described as having a flavor identical to raspberries.

As for me, I ain't eatin' it, but I'm happy to view it morning and evening and sample its perfume during the brief season of flowers.  And I'll grow Iris pallida 'Variegata' forever in my garden.
Posted by ProfessorRoush at 7:00 AM