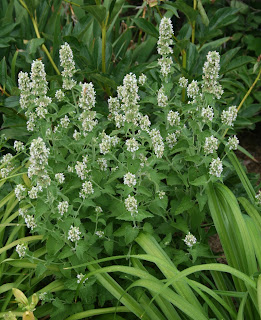 For some time, I had been admiring the drought fortitude of a couple of particular perennial clumps in my peony bed and that of another identical plant in a bed close to a 'Jeanne Lavoie' rose.  These happy-go-lucky plants had a textured medium green foliage that never burns or wilts, and they had began flowering recently, drawing in hundreds of honey bees while providing a nice light-pink (or is it white?) flower for my landscape.
In a flash of unaccustomed brilliance, I realized this was obviously a plant that adapts well to my Flint Hills weather conditions, and so I resolved last week to divide and propagate it in a few more spots.  Since it was already present in a few spots, in fact, I thought that I had probably already come to that conclusion before, divided it, and then forgot about it.  Old age can be such a bummer.  Seeking to learn again the name of this little pet, however, I consulted my landscape maps in each place that it grew and I came up short.  To the best of my knowledge, I had never placed a plant matching this description anywhere near their locations. 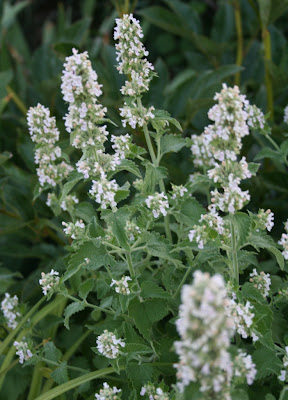 The solution of the mystery, of course, was to acknowledge that I was likely coveting a native Kansas weed, er uh...wildflower, and to turn once again to KSWildflower.org for identification.  And, as usual, a quick search there informed me that I had been admiring the native Catnip (Nepeta cataria), which grows wild over Kansas and, in fact, over the entire United States.  And as I looked for it more carefully, I realized that this member of the mint family was growing throughout my garden; eight separate clumps, although some had not yet started to bloom. As I compared it to the cultivated forms offered locally in fact, it was obvious that my native form is identical to what I could buy for prices between $3.99 and $12.00 depending on the size of the pot.  Talk about your serendipity!  I should be digging this stuff up and selling it instead of looking to acquire more.
Catnip, also known as Catswort or Catmint,  has a long history of use with humankind and our feline brethren.  It contains a steam-distillable terpenoid known as nepetalactone that has a slight numbing effect on people and drives cats absolutely bonkers.  In the case of felines, it is believed to mimic a natural cat pheromone to which about 2/3/rds of cats are genetically susceptible.  So, of course, people have used it in teas and poultices and smoked it, and cats have just; well, cats just view it as a self-aphrodisiac and general whoopee-maker and they just make fools out of themselves rolling around and basking in it whenever they can.  Luckily, our personal cat, living outdoors now because I want it to earn its keep in the form of mouse mutilations, seems to be immune to the effects and so my clumps remain standing tall.  Or perhaps my cat just hasn't discovered it yet, since bruising the leaves enhances the drug's effects on cats.  If you have a cat addict, you'll have to remove the plant from your garden because keeping it there is as cruel as drinking alcohol in front of a recovering alcoholic.
One last thought; nepetalactone is reputed to be ten times more effective at repelling mosquitoes than DEET in the lab but it is supposedly not effective when the plant is rubbed on the skin.  I'm going to try it out because I frankly don't trust those researchers, who are likely just capitalists trying to keep us from using a plentiful and inexpensive alternative to DEET.  Of course, their motive could be to prevent me from being molested by a herd of drug-craving cats, but there are some crosses we all have to bear in the name of science.
Posted by ProfessorRoush at 7:00 AM