I don't know what chronic gardening issues exist in anyone else's particulars, but one repeated Spring chore in my garden is the search for spys, mimics, or imposters that attempt to escape my wrath by camouflage within a beloved plant.  There are, in my landscape, certain weedy vines who attempt to hide out for awhile here and there, but it is the Rough-Leafed Dogwood (Cornus drummondii) that is the bane of my roses and other shrubs. 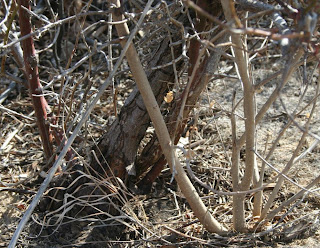 The Rough-Leaf Dogwood is ubiquitous in the Flint Hills, sometimes forming large thickets sufficient to keep people out and provide shelter for lots of different fauna.  Spread everywhere by birds, it seems to take a particular liking to sprouting in the shade of a large shrub, as you can see at the right.  It then grows happily up through that shrub, to become visible during the growing season only as it reaches eye level and only then to a very discerning eye that is examining the foliage instead of the roses. 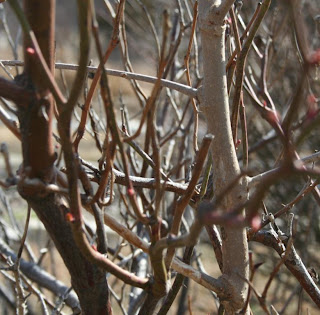 I've found, instead of looking for it during the growing season, that the time to search and destroy this interloper is right now, early Spring before the Time of Leafing Out, when the stems can be discerned by the light grey color and different texture from the shrubs around it. You can see, on the left in the closeup, that the reddish stems of  'Carefree Beauty' are clearly different than the dogwood stems on the right hand side, allowing me the chance to then search out and nip the marauder at its base.  Usually that close cut suffices to kill the dogwood without resorting to herbicide on the cut stump, but if the latter nuclear option becomes necessary, I follow the example of President Harry Truman and use those ultimate weapons judiciously.

The only real difficulty in this exercise is finding the unauthorized growth in other shrubs with stems that resemble more closely the Rough-Leaf Dogwood.  I once had a clump grow in a Mockorange bush for what I estimated was three years before I surgically excised it.

Anyway, take it from me and look now, in this lull time of warming weather and bashful foliage and weed out the weedy shrubs before they get a foothold.  Your roses will thank you come Summer.
﻿
Posted by ProfessorRoush at 9:46 AM