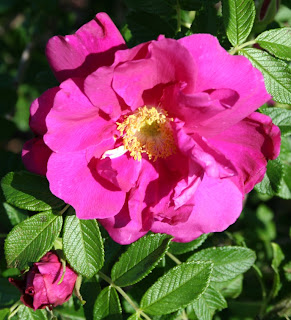 If there are dependable roses for a prairie garden; hardy, disease-free, tough pioneer roses, then surely the Rugosa's should be numbered  among them.  One must, however, learn to take the bad with the good of Rugosa's.   Many are fragrant and their leathery leaves resist blackspot and insects better than most modern roses.  On the downside, they often grow to be enormous bushes with a wicked set of thorns and they can sucker like crazy.  A few Rugosa hybrids, however, are the exception to the rule, and in my garden I would put the relatively recent hybrid 'Purple Pavement' in that latter category. 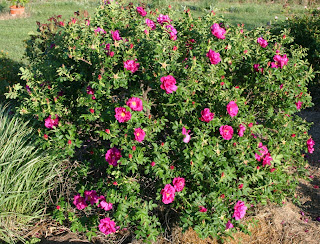 'Purple Pavement' was bred by Karl Baum in 1983 and sports a semi-double bloom with a good strong sweet fragrance and occasional repeat.  This is a truly "round" bush rose suitable for use as a low hedge. I haven't pruned the pictured bush at all.  Described as growing by helpmefind.com to 5 foot tall, it has reached only 3 feet in height and width in my garden in its 4th year and it has yet to sucker.   It is rated hardy to Zone 3b and withstood last summer's heat and drought very well in my garden.  I  also noted in a previous post that Purple Pavement can contribute a little fall color to the garden, the leaves turning yellow before finally dropping down and at least a few fat orange hips left behind.  It is not a well-publicized rose so don't feel bad if you haven't seen one. Suzy Verrier lists it, in her encyclopedic Rosa Rugosa, but only in a single line. It is not mentioned in Osborne and Powning's Hardy Roses, nor in the classic rose compendiums by Peter Beales.   There is a German synonym for 'Purple Pavement' is also known as 'Rotesmeer', if you're having trouble finding it.

The only drawback that I would list for 'Purple Pavement' as a garden rose is the appealing (to me) bloom color.  I am not personallly fond of the magenta-purple-pink common to many of the Rugosa hybrids such as 'Hansa' and 'Rugosa Magnifica'.   'Purple Pavement' may be described as "red" in many sources, but it is definitely "rugosa purple-pink".  If you like that hue, however, you might want to grow more of them than the single specimen that I allow to exist.  At least it minds its manners in the garden and doesn't provide you with wide-spread offspring to muddy up your color scheme.
Posted by ProfessorRoush at 3:00 PM