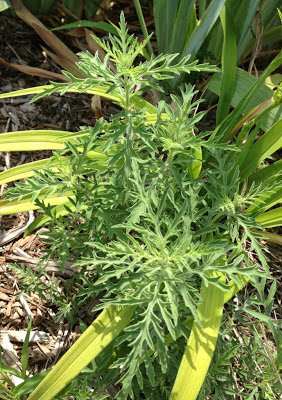 The quote "Earth laughs in flowers," is from a Ralph Emerson poem named Hamatreya, and it really doesn't have the sweet, happy meaning that everyone attributes to it.  In Emerson's poem, the Earth is literally laughing at Man; any Man who dares to presume that a portion of Earth is his, denying that man dies while the Earth endures....laughing at us with flowers.

I realized today that "my Earth" laughs at me too, only it laughs in Ambrosia artemisiifolia.  That's Common Ragweed to you and I, also known as Annual Ragweed.  Everywhere that I sink spade in soil, this pernicious weed pops up.  I never see it on the unbroken prairie and I've never let it set seed in my garden, but I would estimate, from the frequency it crops up as a weed, that half of the mass of any given spadeful of my soil must actually be ragweed seed.

I had an infestation in my iris bed this year so bad that I considered, for a time, selling the house merely to rid myself of it.  Here it is (above), growing in the middle of a daylily.  There it is (below), hiding at the roots of a rose.  It spreads, I think both by runners and seed.  It laughs, I know, at my feeble attempts to remove it.  It's partially resistant to glyphosate, shrugging off the first blasts from the sprayer like it was being watered.  I suspect that it suppresses growth in plants who dare to grow in the same soil with it, like a walnut tree with soft velvety leaves and a pollen that brings tears to the eyes of man. 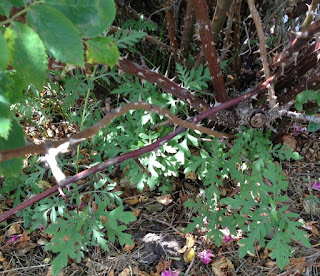 I've got a hunch that the very name, Ambrosia, was a joke by Linnaeus himself.  Ambrosia, of course, was the food of the Greek gods, thought to bestow immortality to those who consumed it.  "Food of the gods," my royal hiney!  The only immortality ragweed provides is to itself.  Once established, it's impossible to unestablish.

My favorite wildflower website, kswildflower, lists the habitat of Common Ragweed as "disturbed sites, roadsides, waste areas, prairies, pastures, stream banks, pond and lake margins, old fields, fallow fields; wet to dry soils."  Mull on that for a moment.  Ragweed grows anywhere that the soil is disturbed, like it was created for the sole purpose of badgering mankind.  Each plant produces over a billion grains of highly allergenic pollen in a year.  I don't believe all that pollen is necessary just for reproduction.  Perhaps one billion pollen grains per plant is just the Earth's way of getting even with us for disturbing it.

Crabby old Emerson was  only partially right.  The Earth doesn't laugh at our fleeting folly in flowers.  It laughs in ragweed.  Thoreau probably learned that at Walden's Pond, but never bothered to tell Emerson.

Posted by ProfessorRoush at 10:12 PM